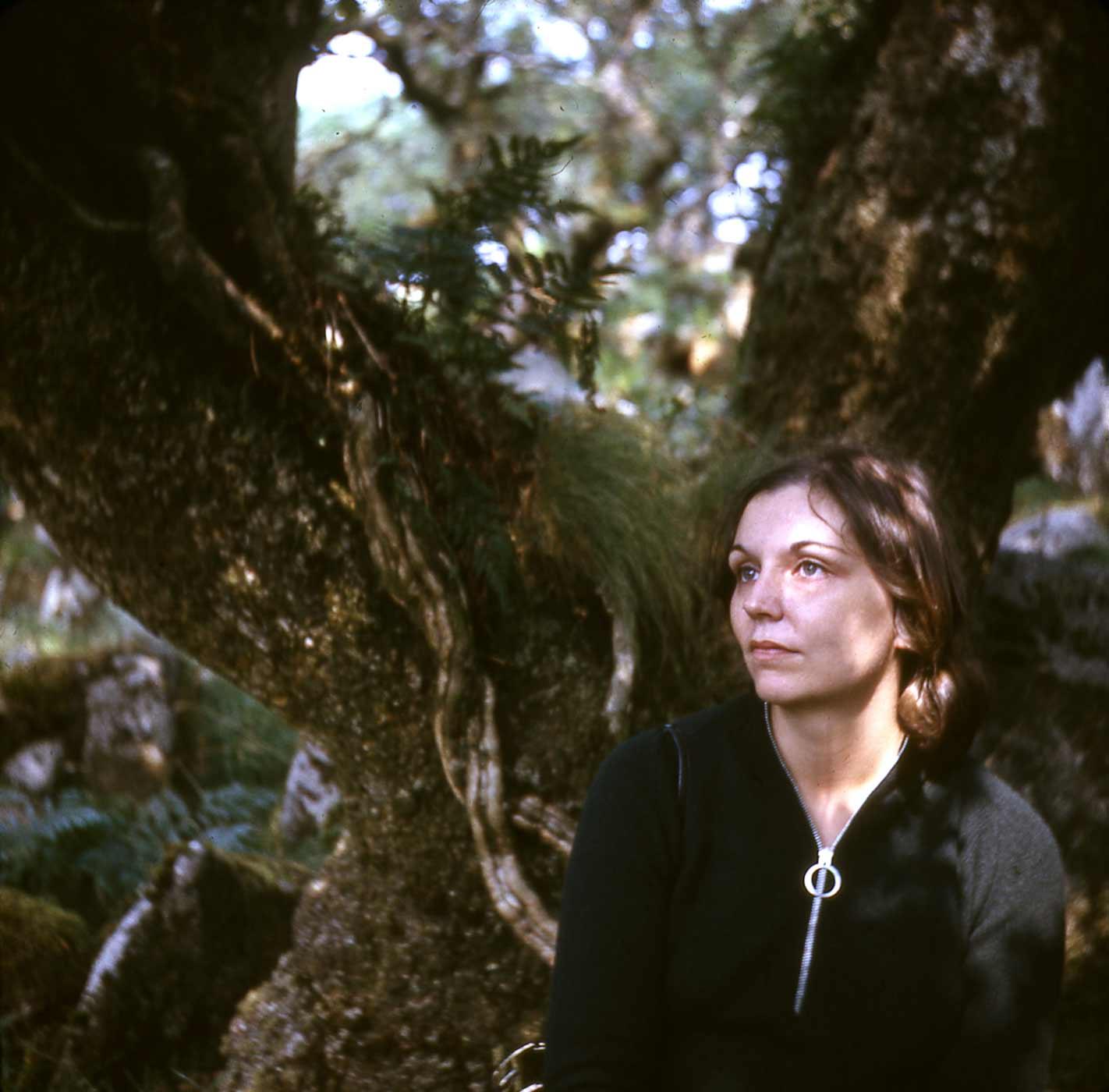 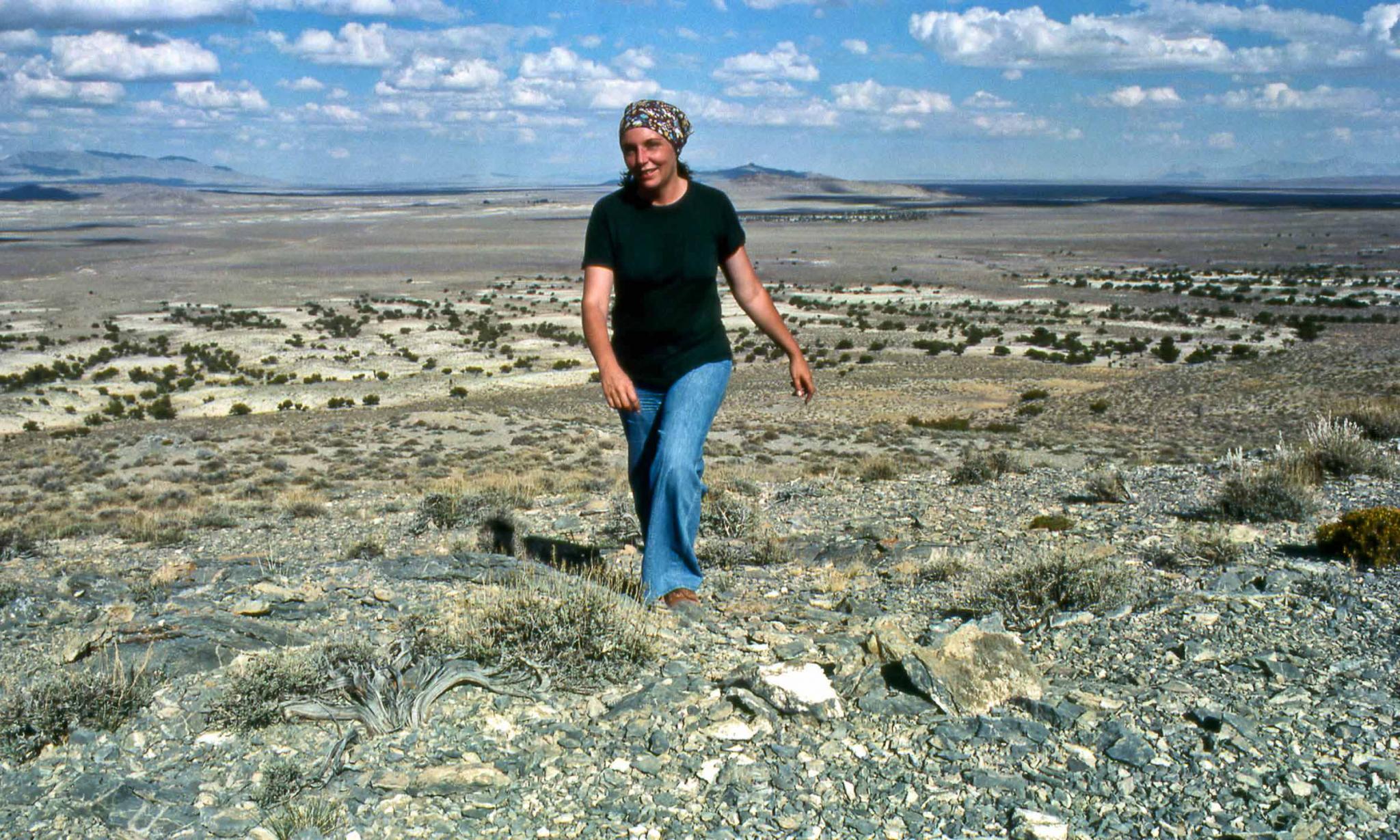 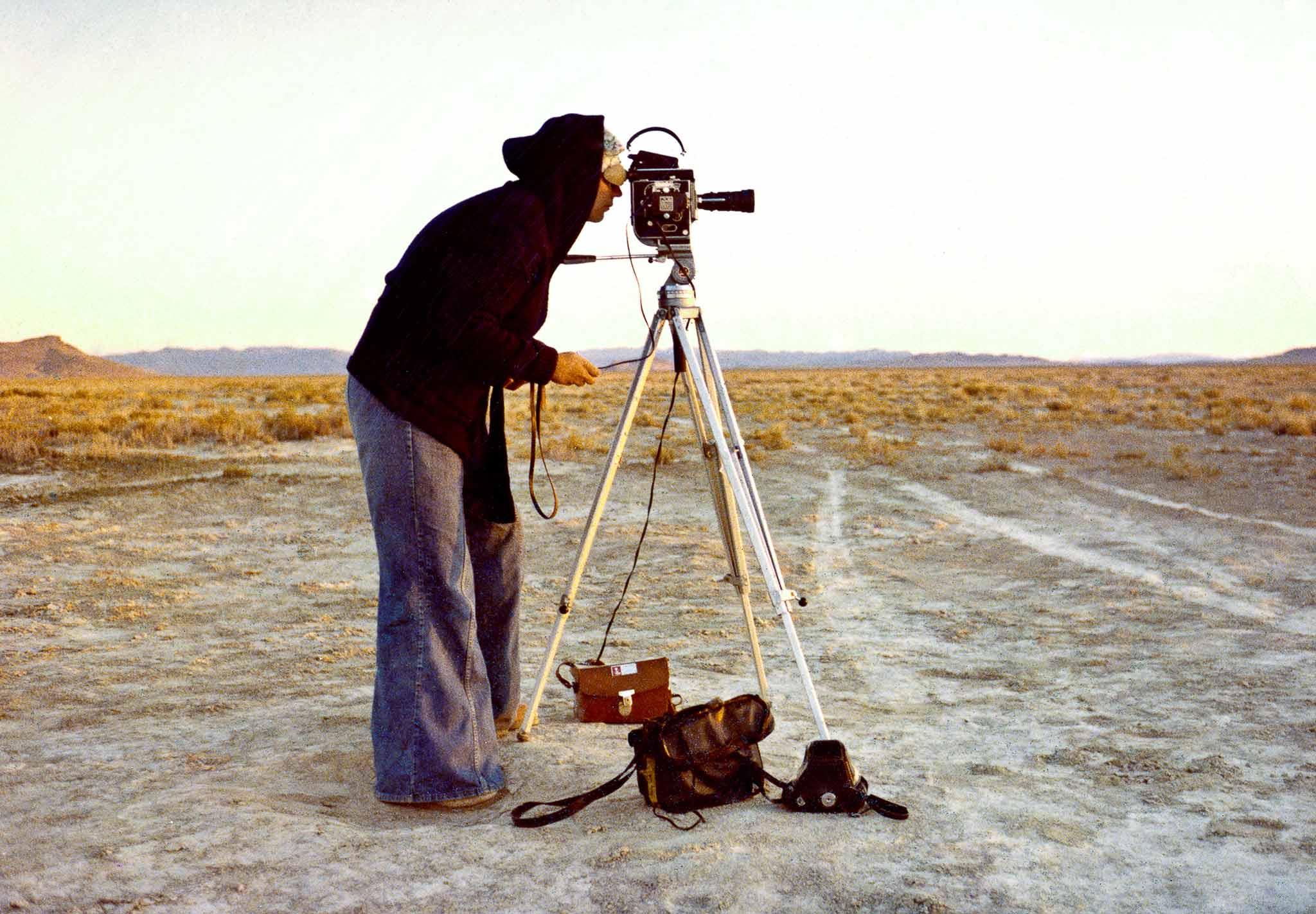 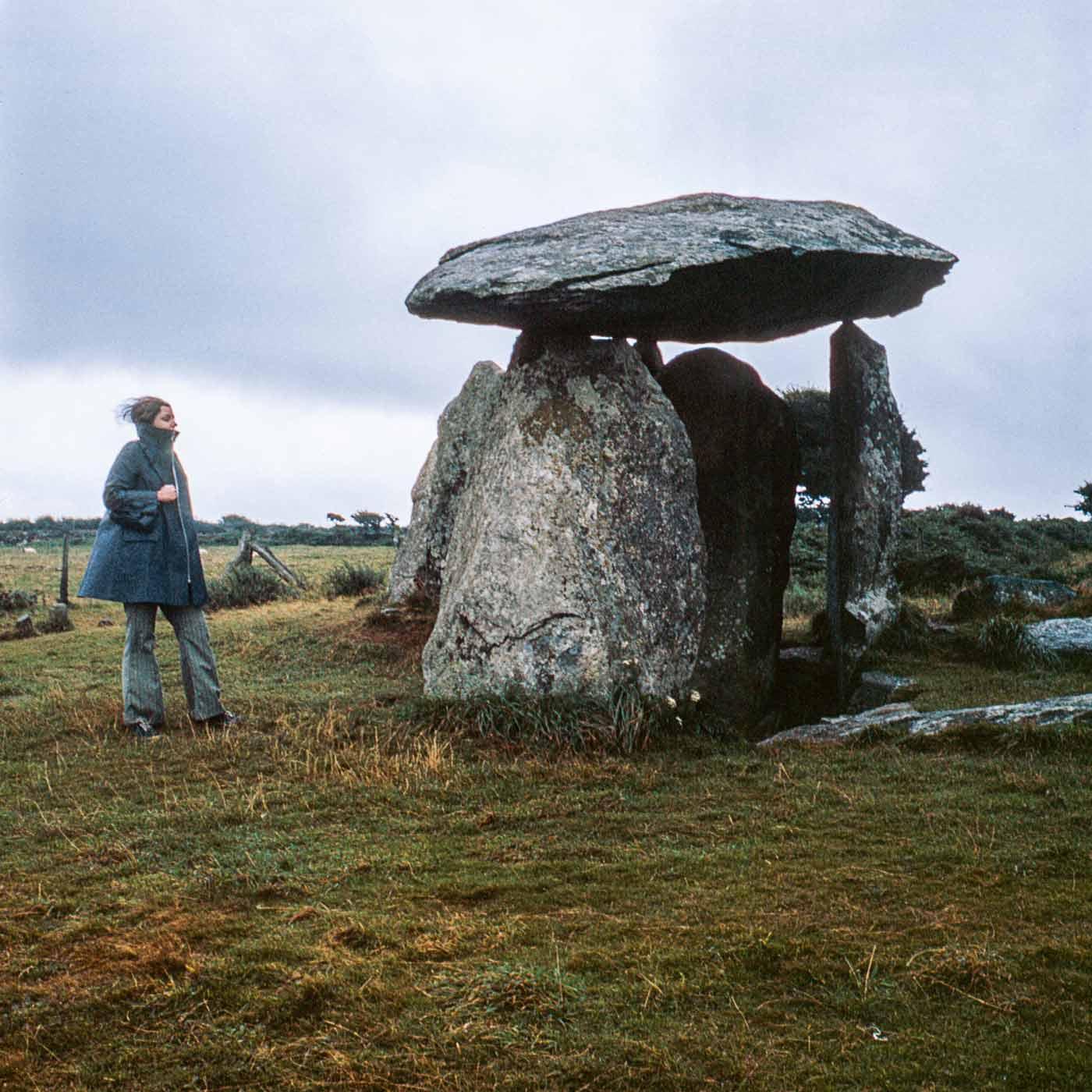 Holt and Smithson in a diner on a trip to a slate quarry in New Jersey, 1968 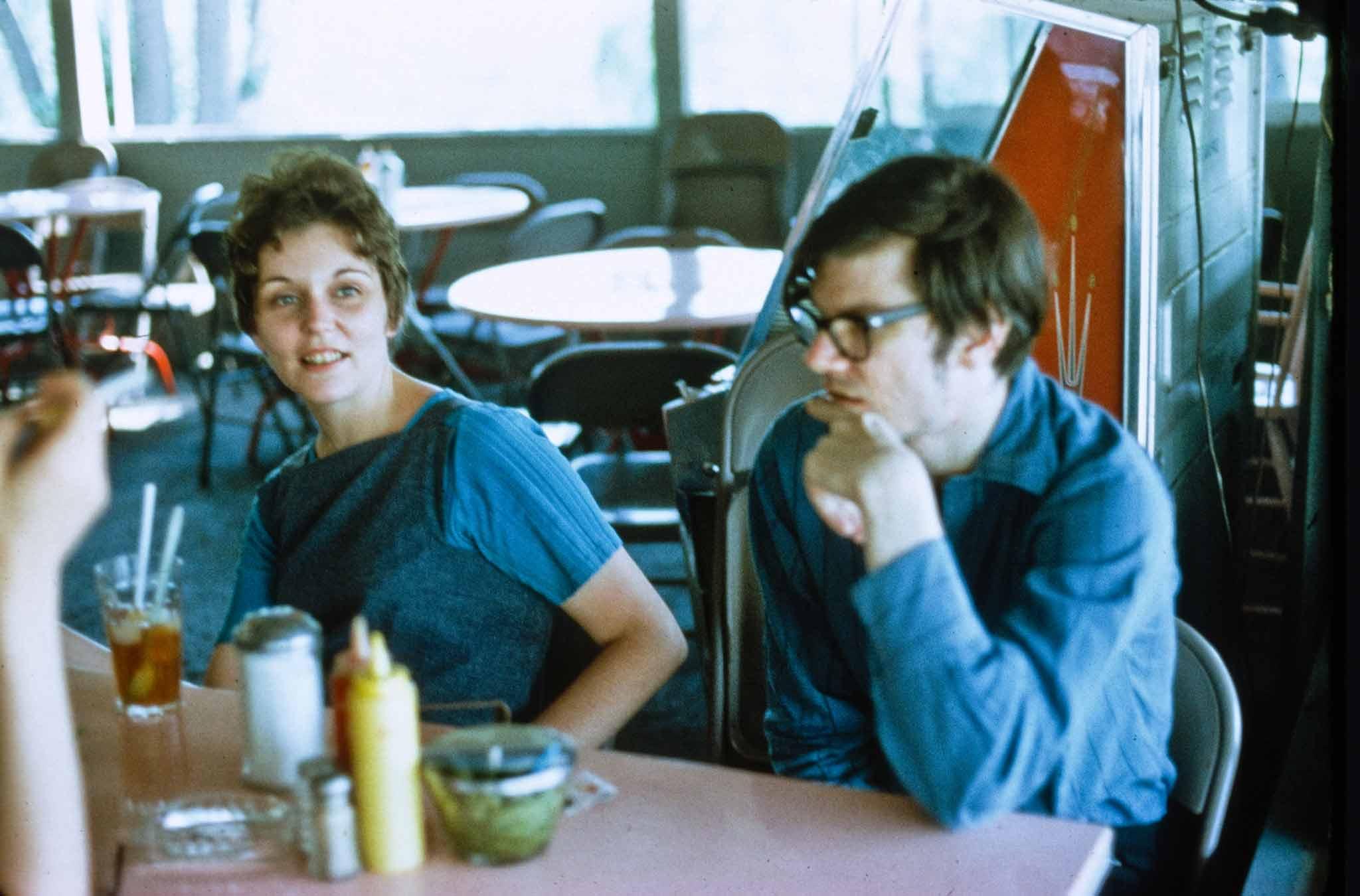 Holt and Smithson in a diner on a trip to a slate quarry in New Jersey, 1968

Nancy Holt standing in one of the Sun Tunnels, outside Lucin, Utah 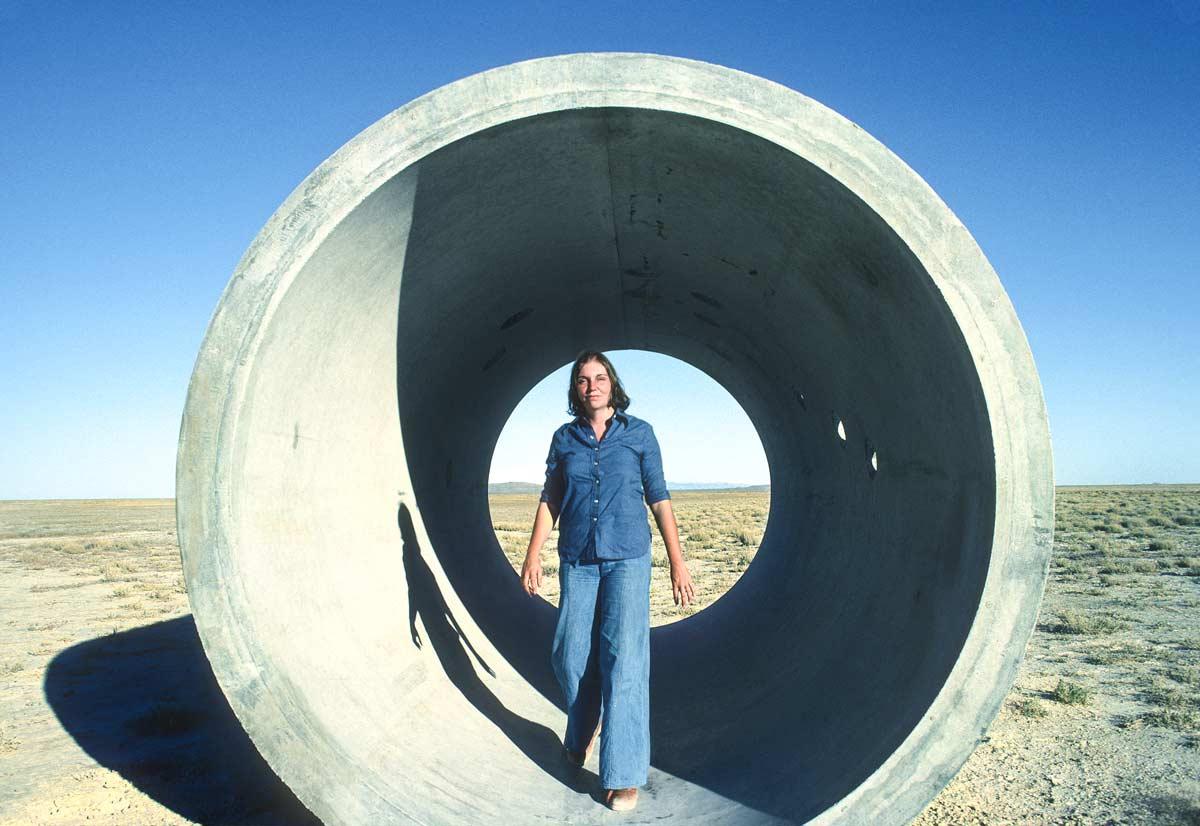 Nancy Holt standing in one of the Sun Tunnels, outside Lucin, Utah

Holt at the site of the construction of her earthwork Up and Under, built in an abandoned sand quarry in Nokia, Finland, 1998 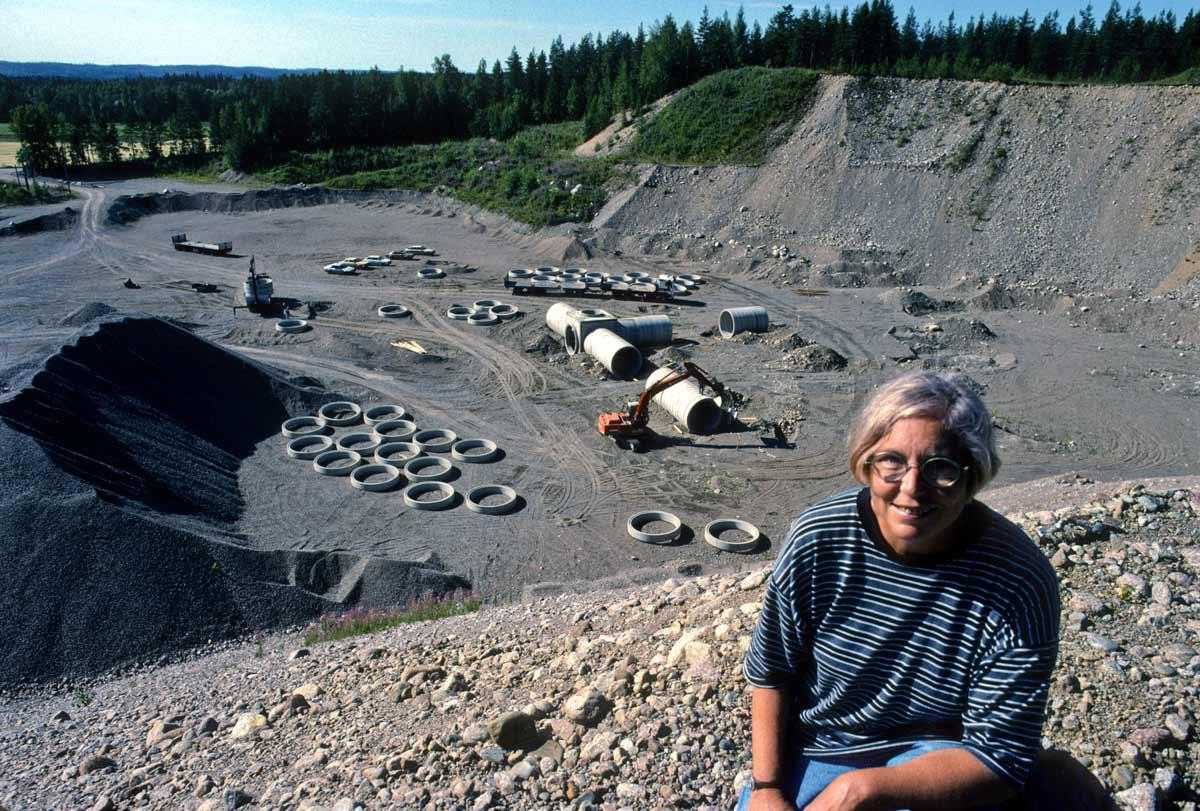 Holt at the site of the construction of her earthwork Up and Under, built in an abandoned sand quarry in Nokia, Finland, 1998 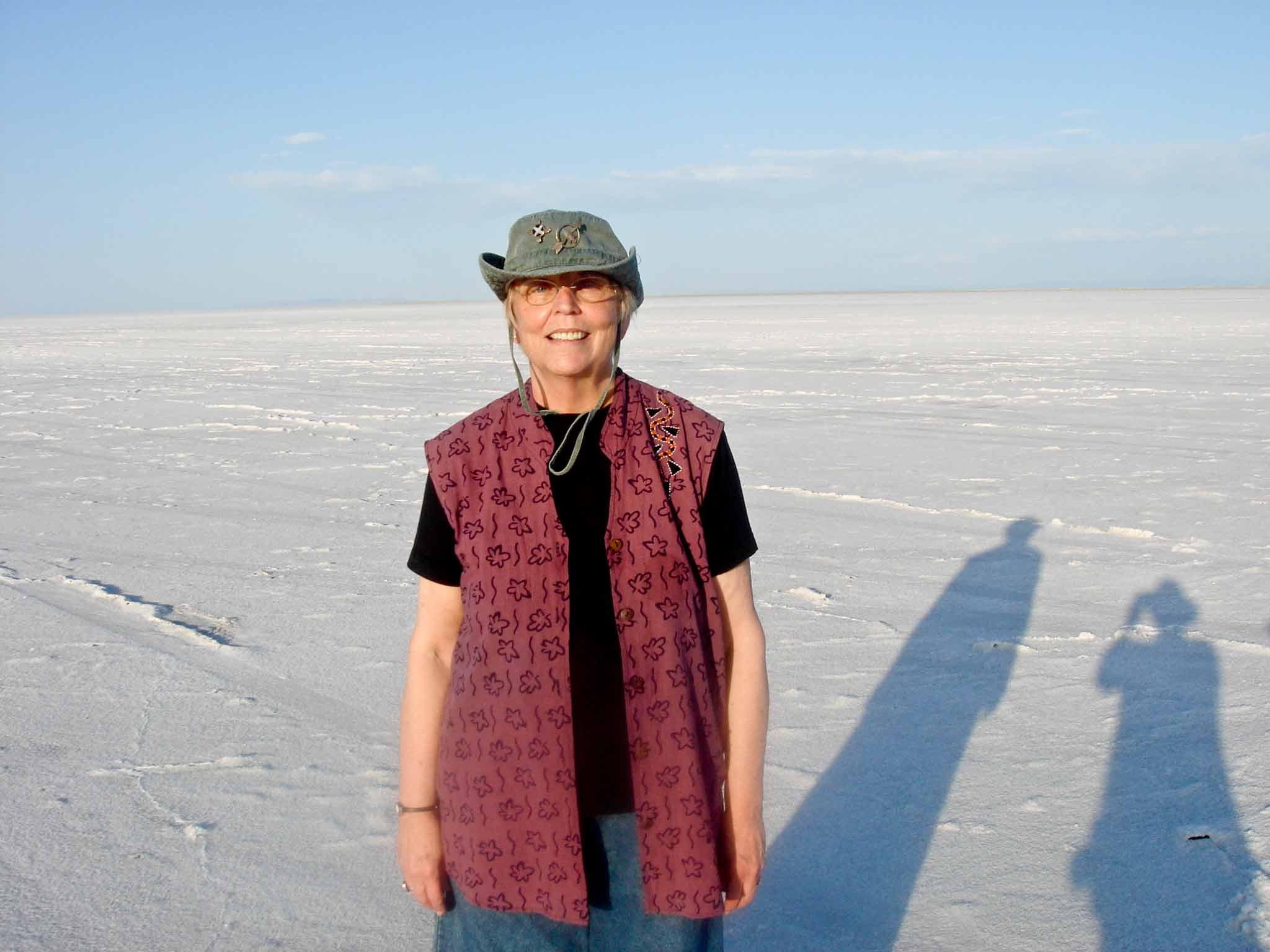 A still from the film Sun Tunnels showing Holt directing the placement of one of the newly constructed tunnels. 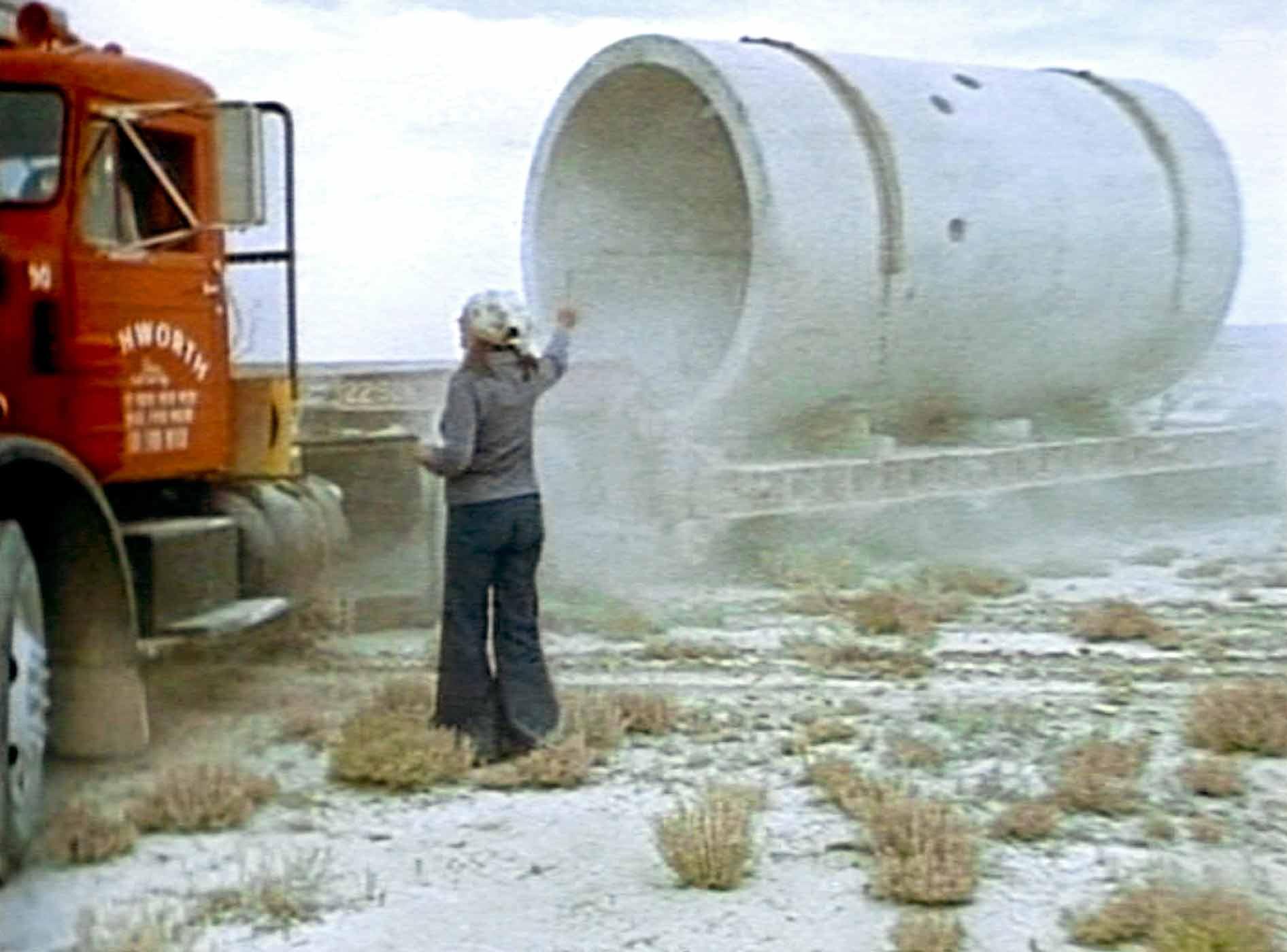 A still from the film Sun Tunnels showing Holt directing the placement of one of the newly constructed tunnels.

Holt in the back of a truck in the Utah desert 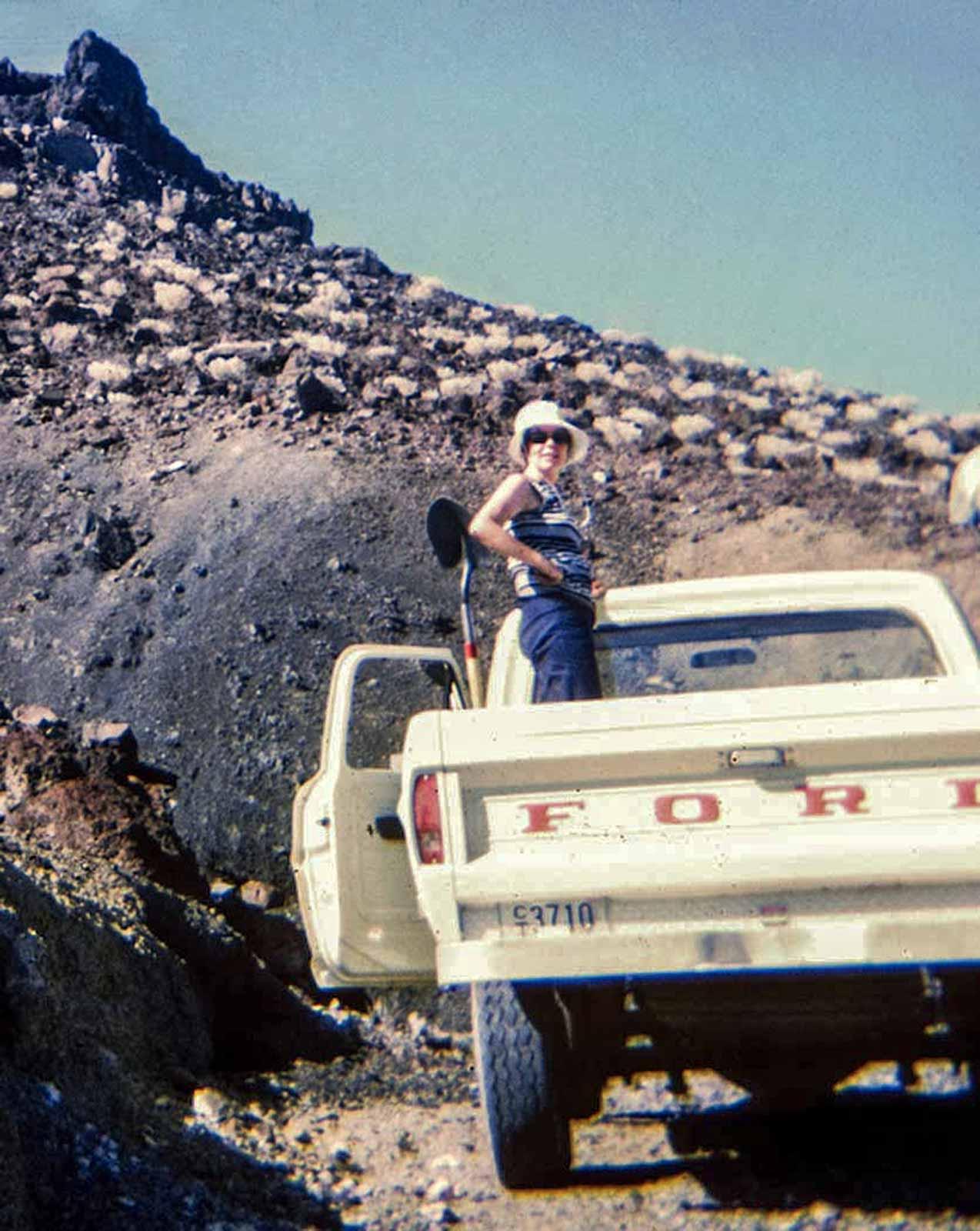 Holt in the back of a truck in the Utah desert

Holt framed by the Holes of Light installation at LoGiudice Gallery, New York, 1973 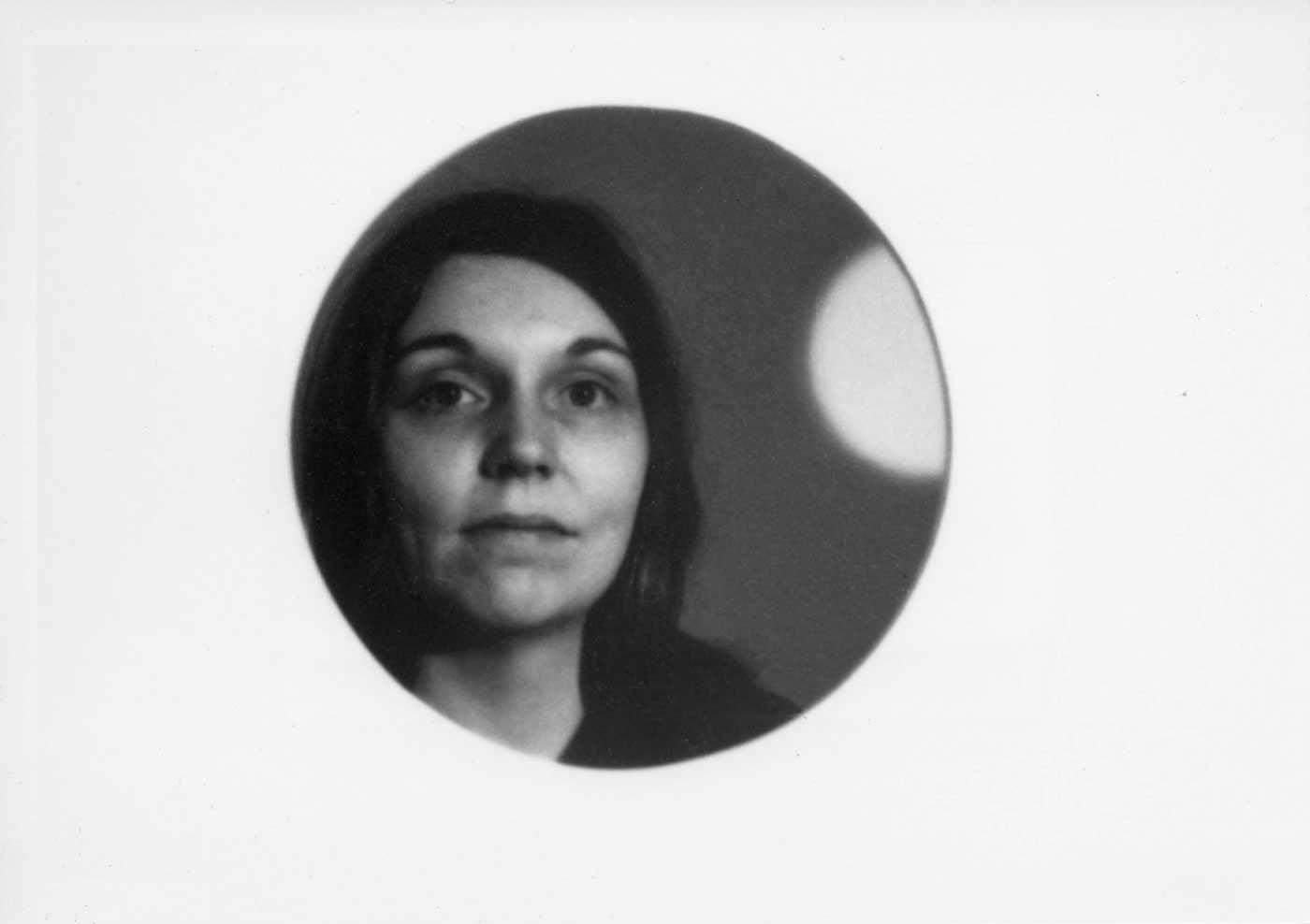 Holt framed by the Holes of Light installation at LoGiudice Gallery, New York, 1973 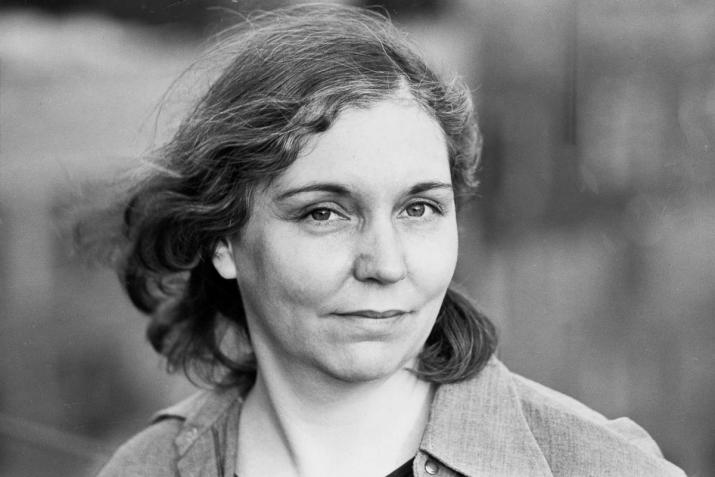 Nancy Holt (April 5, 1938 – February 8, 2014) was a member of the earth, land, and conceptual art movements. An innovator of site-specific installation and the moving image, Holt recalibrated the limits of art. She expanded the places where art could be found and embraced the new media of her time. Across five decades she asked questions about how we might understand our place in the world, investigating perception, systems, and place. Holt’s rich artistic output spanned concrete poetry, audioworks, film and video, photography, slideworks, ephemeral gestures, drawings, room-sized installations, earthworks, artists’ books, and public sculpture commissions.

Born in Worcester in Massachusetts, Holt grew up in New Jersey. She graduated with a degree in biology from Tufts University, Massachusetts in 1960. Later that year she moved to New York City where she met the artist Robert Smithson; the two were married on June 8, 1963. The places Holt lived remained important to her: New Jersey is the site of Stone Ruin Tour (1967), Pine Barrens (1975), and Sky Mound (1984-); and Massachusetts the location of Underscan (1973-74) and Spinwinder (1991). Her earliest exhibitions were in New York: the first group presentation Language III at Dwan Gallery in 1969, and the first solo in 1972 at l0 Bleecker Street. In 1968 Holt made her first journey to the American West.

“As soon as I got to the desert, I connected with the place. Before that, the only other place that I had felt in touch with in the same way was the Pine Barrens in southern New Jersey, which only begins to approach that kind of Western spaciousness.”

The Great Basin Desert, Utah is where her landmark earthwork Sun Tunnels (1973-76) is located. In 1995 Holt made Galisteo, New Mexico her home.

Holt was attentive to language as a system structuring perception and understanding of place. In the mid 1960s she worked as an assistant literary editor at the magazine Harper’s Bazaar, and in 1966 began creating concrete poems and text-based works of art. A year later she extended her exploration of language from the page to the landscape with her Buried Poems and Tours, where she guided friends to sites with written scores. In 1968 this mapping of language onto site was conducted through film and photography, in 1969 through video, then audio in 1971. Holt’s interest in the page returned in the artists’ books Ransacked (1980) and Time Outs (1985), in her own writings, and in her editorial work—which includes the first edition of The Writings of Robert Smithson (1979). She went on to trace the systems of the cosmos, the functions of the built environment, and the human mapping of landscape.

Photography was an essential medium for Holt; it enabled “vision to be fixed” and visual perception to be focused. Her early photoworks Trail Markers (1969) and California Sun Signs (1972) used seriality to create visual poems. Photography led Holt to create “seeing devices” to draw attention to visual perception and place with her Locators. Comprising T-shaped industrial piping to be looked through with one eye, the Locators first focused on views in and from her studio, expanding into the landscape with Missoula Ranch Locators: Vision Encompassed (1972). In turn, the Locators led to her earthworks Sun Tunnels and Hydra’s Head (1974), which  “brought the stars down to earth.”

“I feel that the need to look at the sky—at the moon and the stars—is very basic, and it is inside all of us. So, when I say my work is an exteriorization of my own inner reality, I mean I am giving back to people through art what they already have in them.”

Holt was equally interested in the built environment as she was natural and celestial landscapes. Whether emanating from the stars or plugged into electricity grids, the perceptual qualities of light fascinated her. The room-sized installation Holes of Light (1973) used switching electrical light and Mirrors of Light (1973-74) a theater spotlight and mirrors to materialize light reflections and bring awareness to the body in space. Similarly the Visual Sound Zones (1972-79) heighten consciousness of space. These audioworks describe interior spaces in detail, such as John Weber Gallery and PS1: locations at the heart of 1970s experimental art.

In the 1980s, Holt’s exploration of systems moved to the fabric of the built environment with functional sculptural installations she termed System Works. Using standard industrial materials designed for heating, ventilation, lighting, drainage—as well as the raw materials of fossil fuels and waste—the System Works are connected to internal architectural organs.

“The electrical systems light, the heating systems heat. The drainage systems drain, the ventilation systems circulate air […] the sculptures are exposed fragments of vast hidden systems, they are part of open-ended systems, part of the world.”

Electrical System (1982) comprises more than seventy light bulbs on a network of arching conduit connected to the museum’s power system. Holt’s Pipeline works, created in Alaska using industrial materials, call attention to the physical and economic systems powering the buildings in which they were exhibited.⁠⁠ These investigations of light and systems continued at a larger scale in Holt’s later outdoor sculptures. Commissioners included Western Washington University (Stone Enclosure: Rock Rings, 1977-84), the 1980 Winter Olympics (30 Below, 1979), the New York Subway (Astral Grating, 1986), and Arlington Public Art (Dark Star Park, 1979-84). Many, but not all, of Holt’s sculptural ideas were realized, and she used drawing as a medium to think through and articulate her sculptural thinking. Her works on paper range from careful detailing to mathematical calculations and full renderings.

In 2010-12 the retrospective Nancy Holt: Sightlines surveyed her five decades of art making,  accompanied by a monograph edited by Alena J Williams, published by University of California Press. Nancy Holt passed away in New York City in 2014. From 1973 until 2014 she cared for the Estate of Robert Smithson, whom she married in 1963. In 2014 Nancy Holt willed Holt/Smithson Foundation into being. Nancy Holt and Robert Smithson transformed the world of art and ideas. Holt/Smithson Foundation develops their distinctive creative legacies.

In 2022 Holt is the subject of an extensive survey, Nancy Holt/Inside Outside, at Bildmuseet, Sweden, on show from June until February 2023. The exhibition is produced in collaboration with MACBA Museo D’art Contemporani de Barcelona, Spain where it will be presented in 2023 . Nancy Holt/Inside Outside is accompanied by an expansive publication, made partnership with Monacelli Press. Between October 2022 and January 2023 Sprüth Magers, Los Angeles presents the solo exhibition Nancy Holt: Locating Perception. In Fall 2022 Holt’s work features in two major group exhibitions: Ventilation System (1985-92) in the exhibition Air at the Gallery of Modern Art, Queensland, Australia and Mirrors of Light II at the new Vladem Contemporary wing of New Mexico Museum of Art. In September 2022 Parafin presents Nancy Holt: Photoworks 1967-69 in at The Armory in New York.

Nancy Holt’s resume can be downloaded here. We are working towards a comprehensive document, and we welcome additions and corrections. Be in touch by emailing contact@holtsmithsonfoundation.org. This resume was last updated on December 16, 2021.

Works by Holt are permanently installed at public institutions including Miami University Art Museum; University of Massachusetts, Dartmouth; Western Washington University; and University of South Florida. For locations of extant outdoor works by Holt see our map and visiting instructions.

In 2012 Nancy Holt was made a Chevalier of the of the Ordre des Arts et des Lettres by the French Government. In 2013 she was presented with a Lifetime Achievement Award by the International Sculpture Center in New York. Holt received five National Endowment for the Arts Fellowships, two New York Creative Artist Fellowships, a Guggenheim Fellowship, and an Honorary Doctorate from the University of South Florida, Tampa.

Nancy Holt is represented by Parafin and Sprüth Magers.

Nancy taught me how to see.