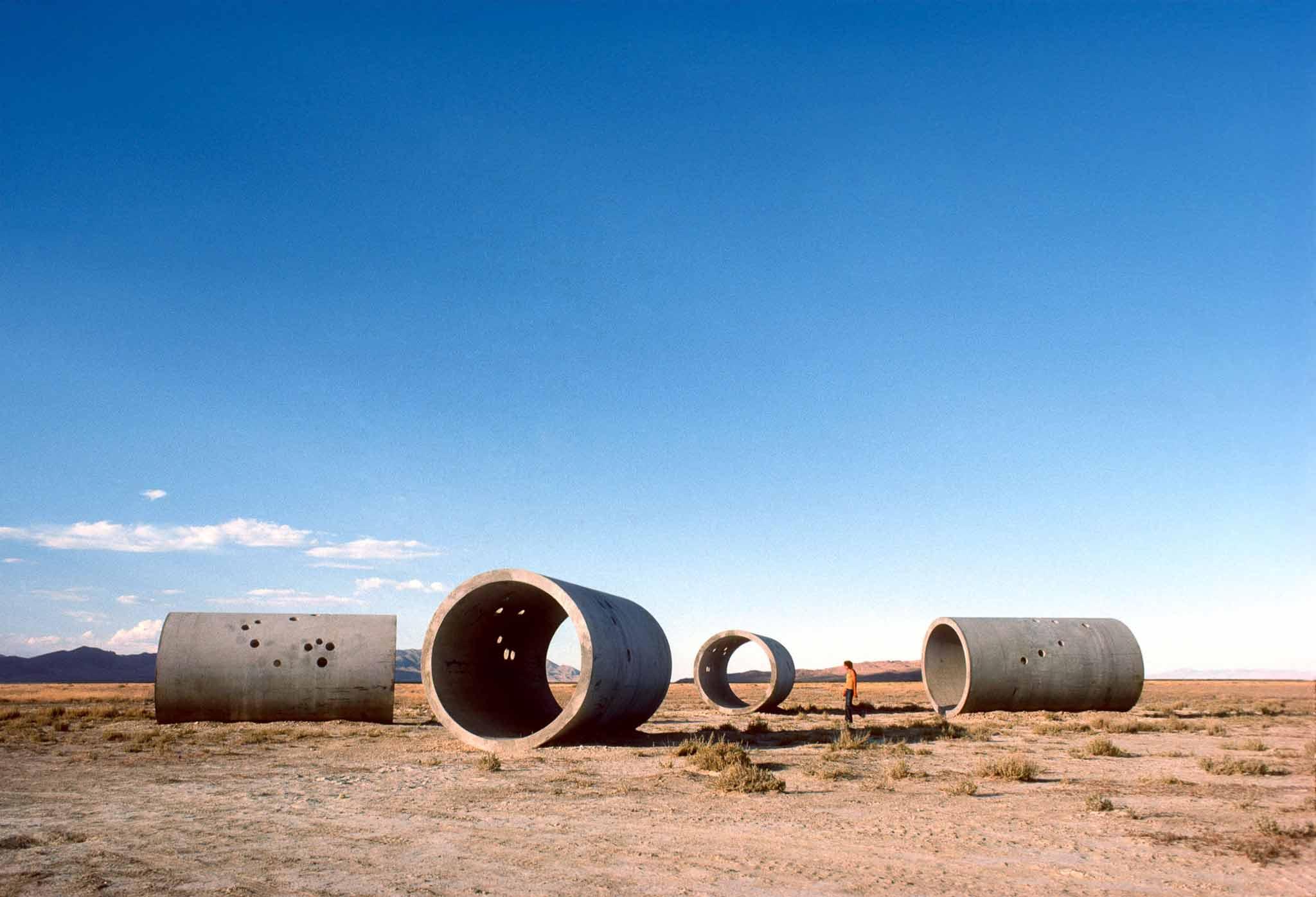 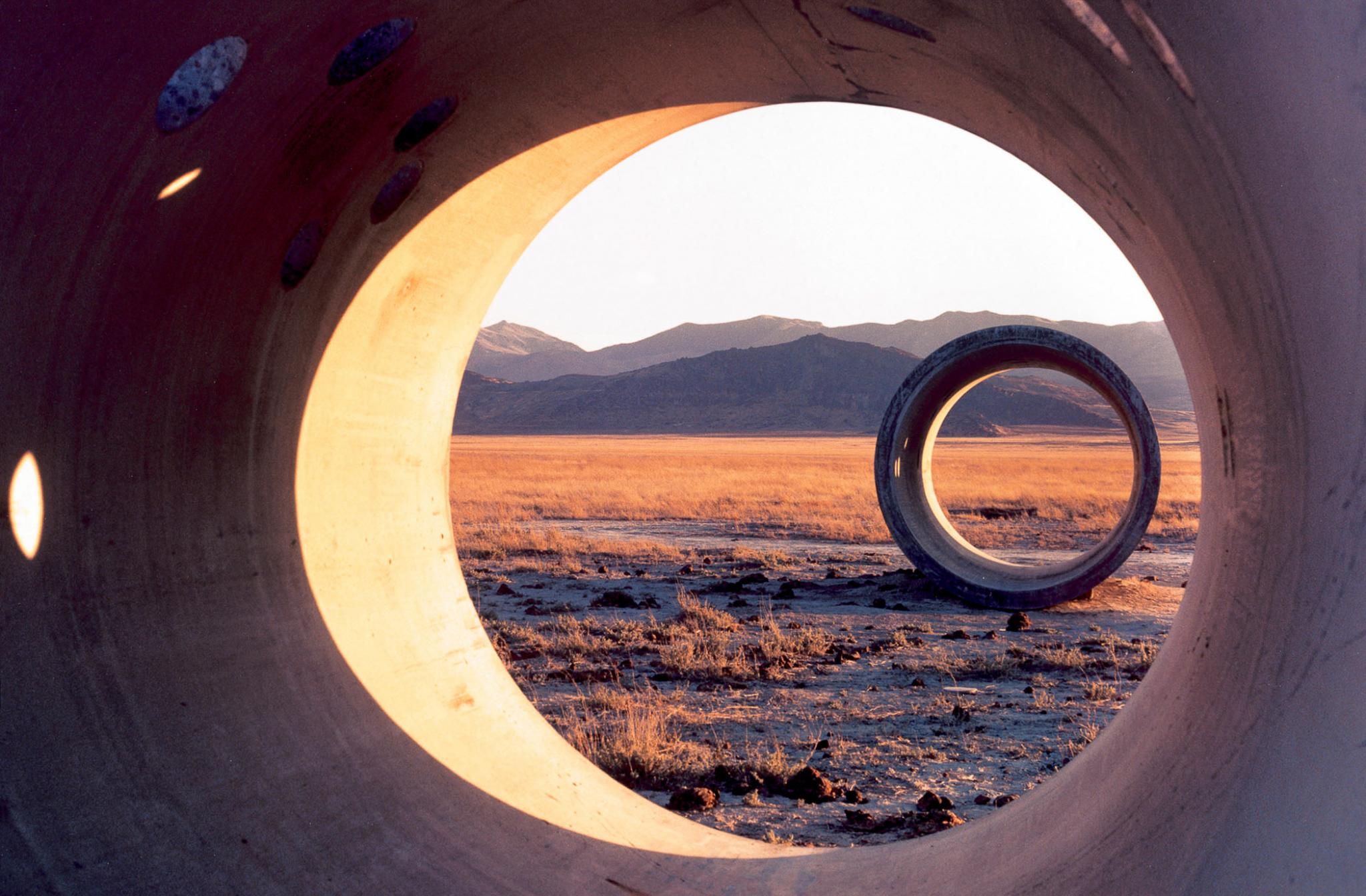 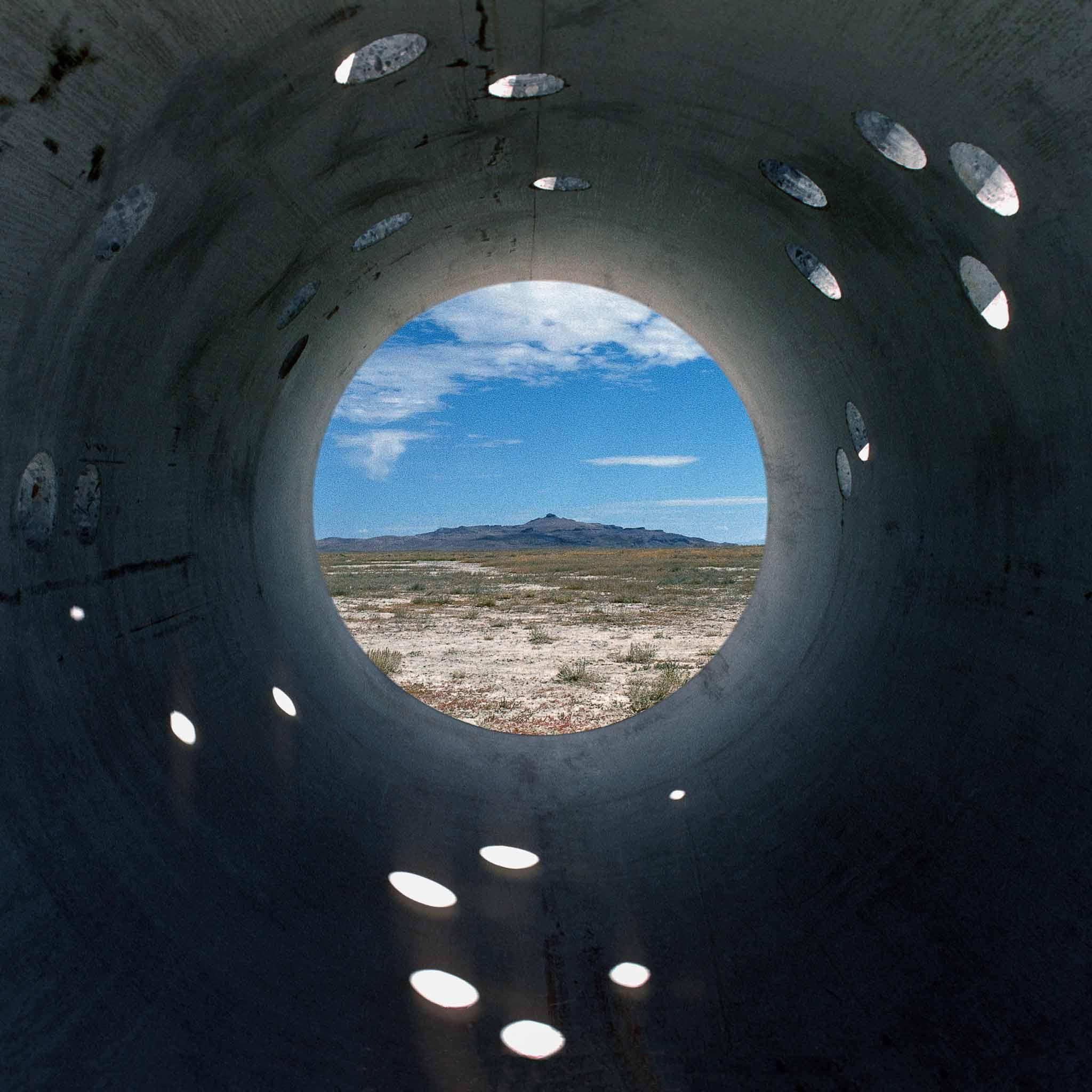 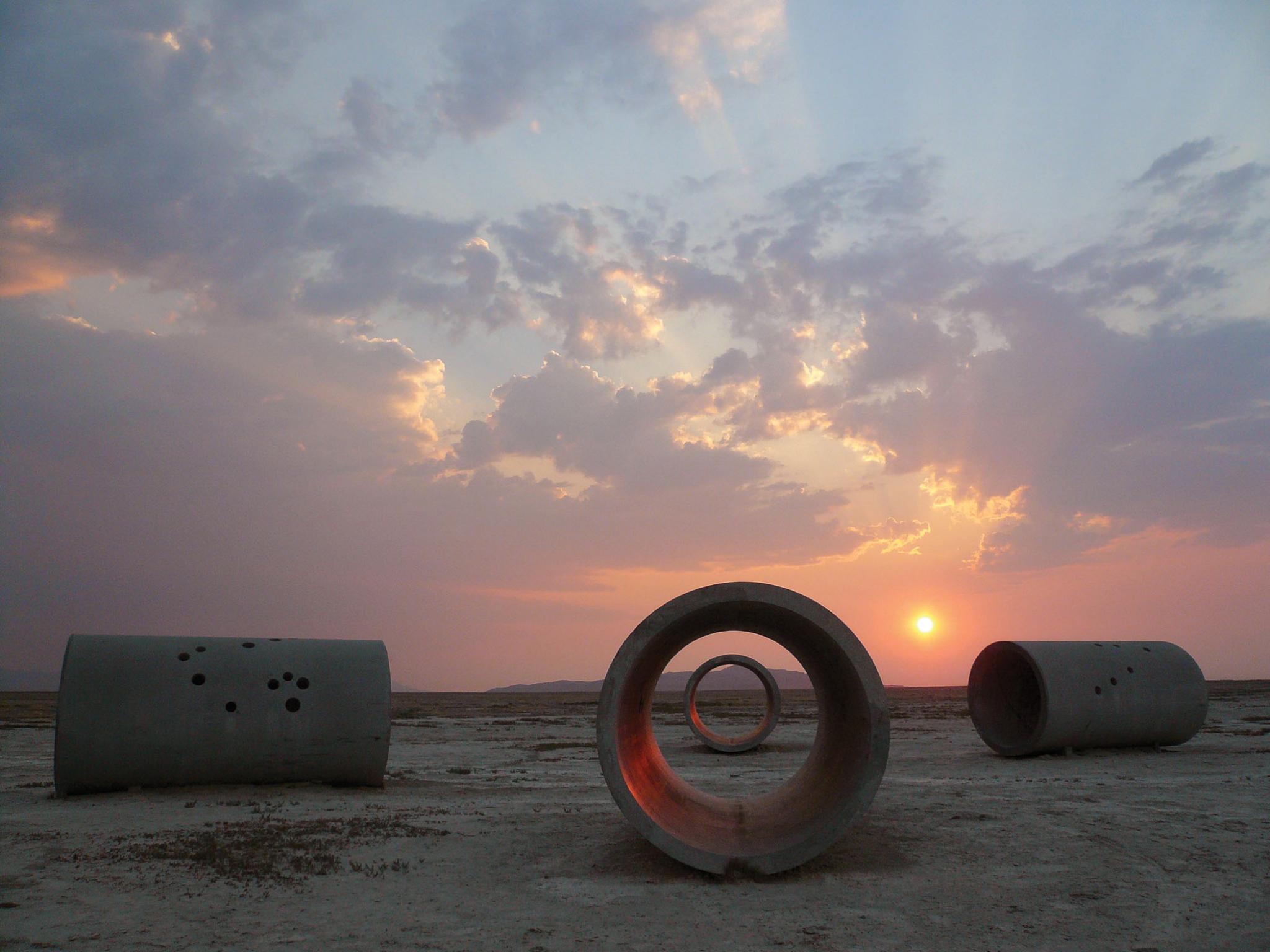 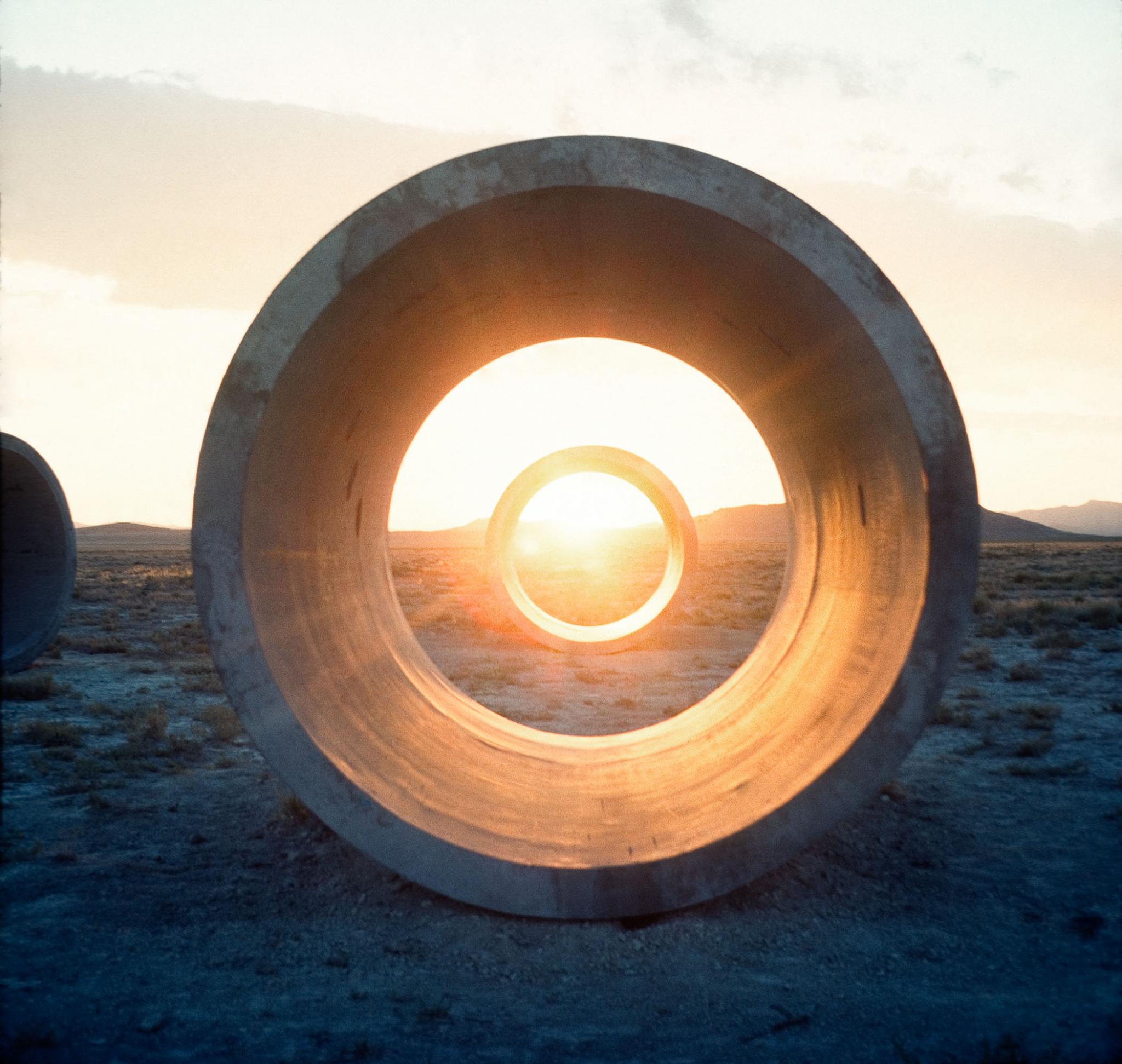 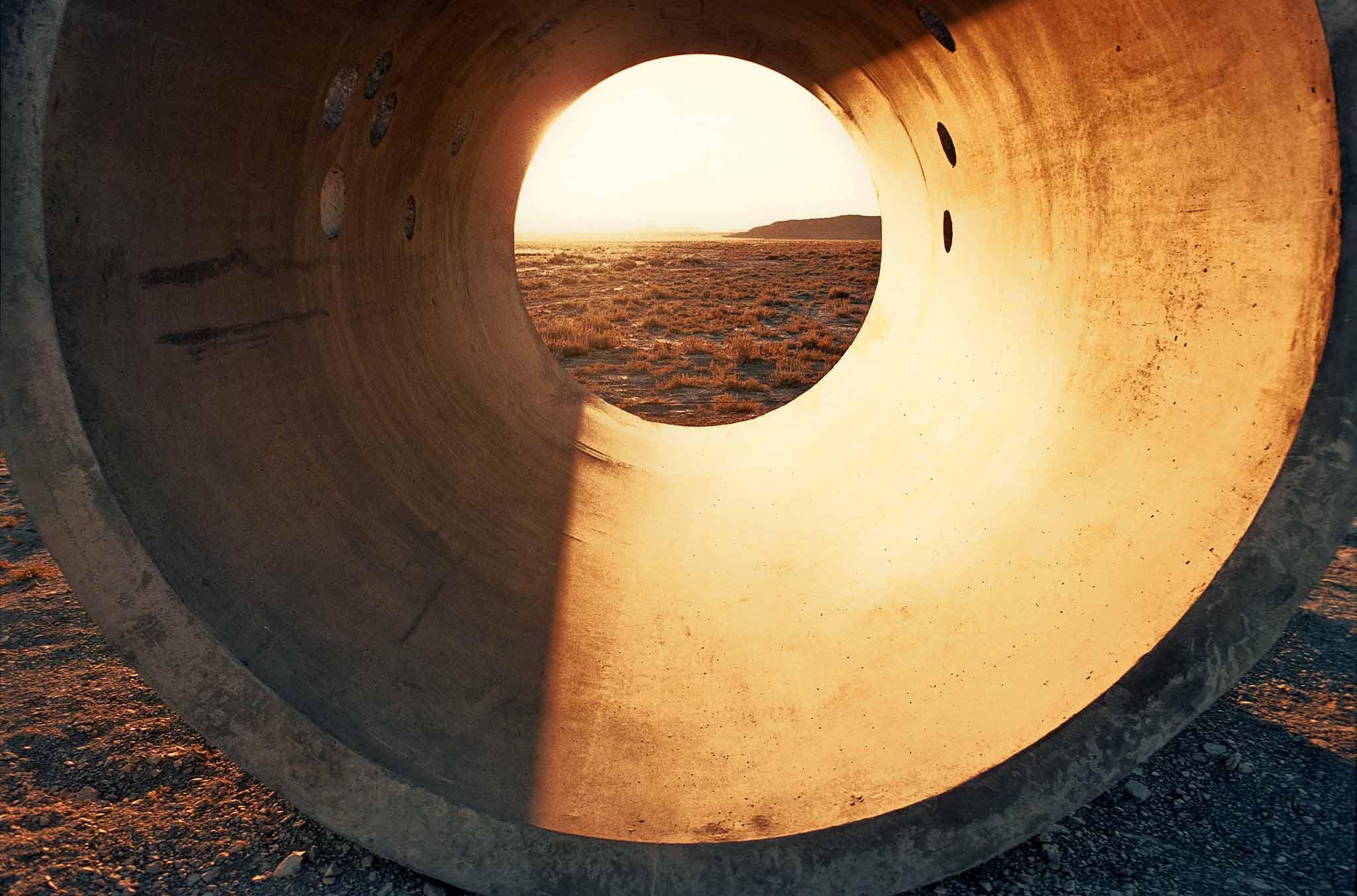 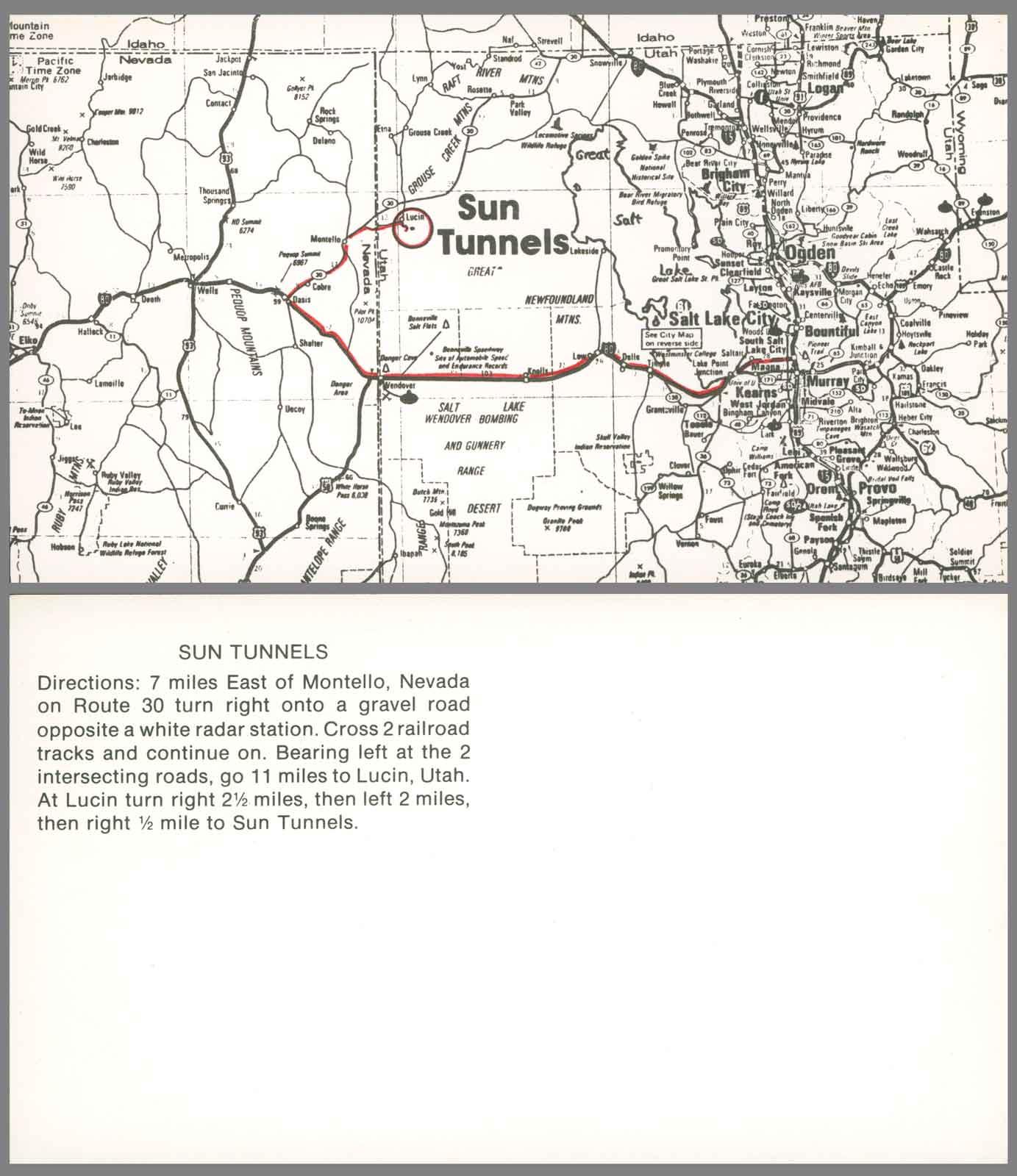 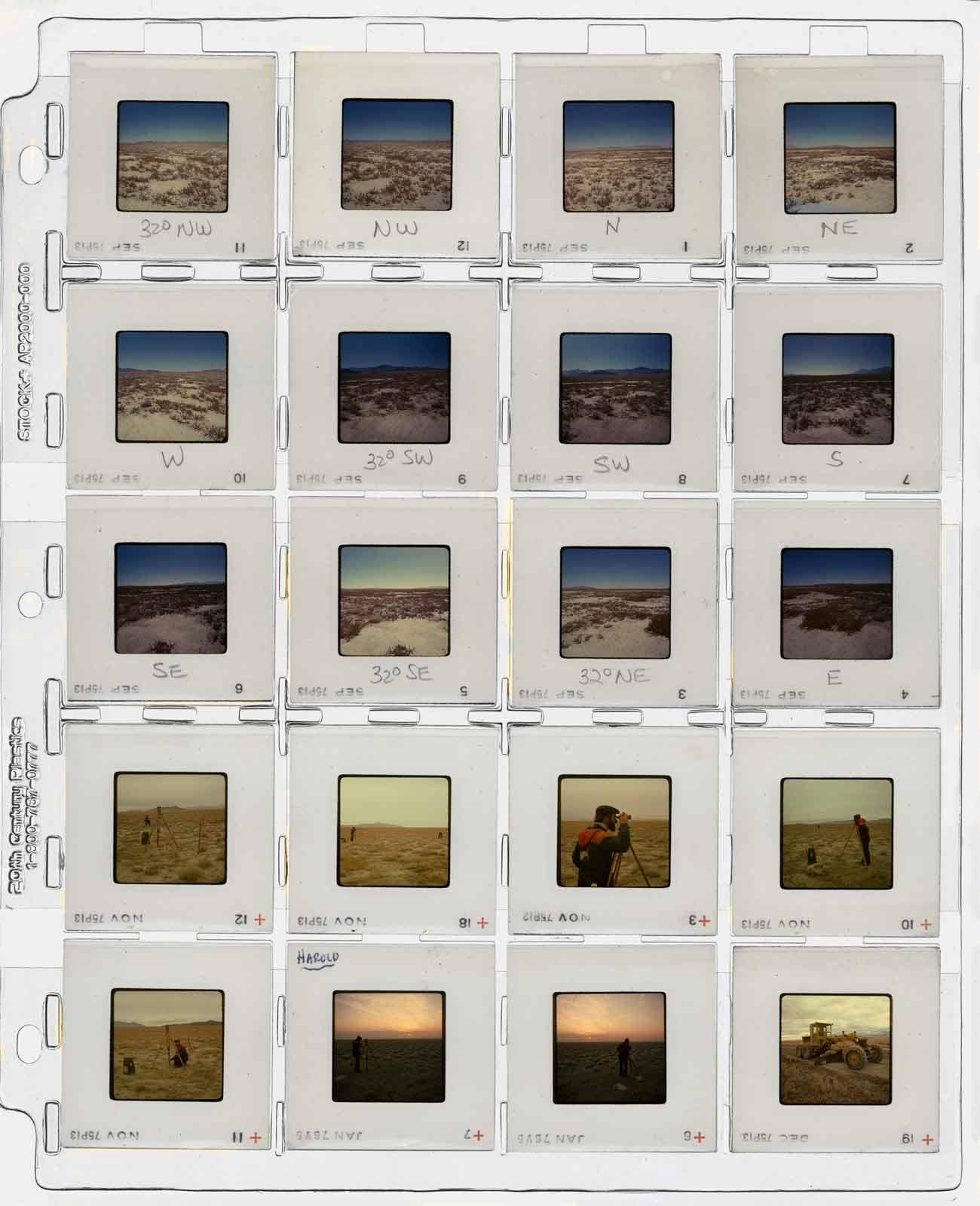 In a remote valley of Utah’s Great Basin Desert, Holt’s massive ​Sun Tunnels ​looms along the horizon, visible from over a mile away. The four concrete structures are arranged in a cross formation, positioned precisely to frame the sun as it rises and sets during the summer and winter solstices. Small holes are configured in the concrete to cast projections of constellations along the tunnels’ interior; Draco, Perseus, Columba, and Capricorn materialize out of sunlight, their patterns illuminated upon the viewer inside. With ​Sun Tunnels, ​Holt brings the cosmos down to the earth and into the realm of human experience. 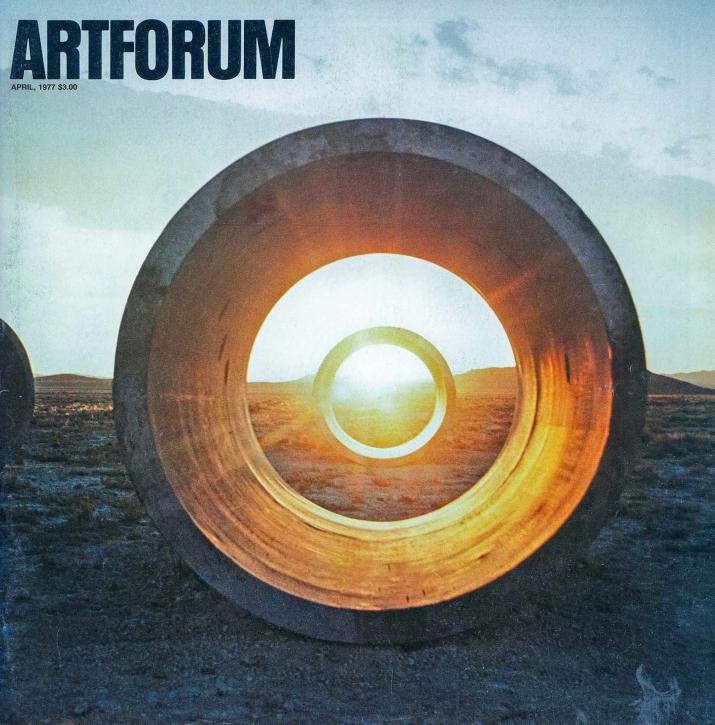 Sun Tunnels, 1973–76, is built on forty acres, which I bought in 1974 specifically as a site for the work. The land is in the Great Basin Desert in northwestern Utah, about four miles southeast of Lucin (pop. ten) and nine miles east of the Nevada border.

The idea for Sun Tunnels became clearer to me while I was in the desert watching the sun rising and setting, keeping the time of the earth. Sun Tunnels can exist only in that particular place—the work evolved out of its site. 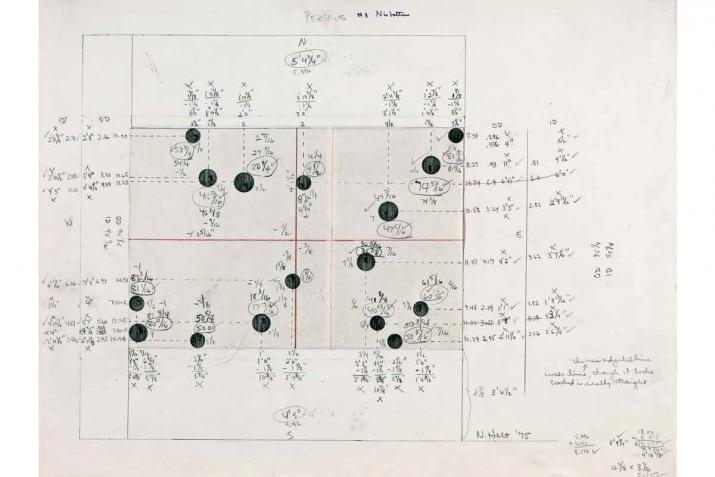 As the name suggests, this is Holt’s plan for the holes that were to perforate one of the concrete tunnels, as proxy for the Perseus constellation, in her landmark earthwork, Sun Tunnels. In selecting the constellations for each tunnel, Holt required that the stars be of different magnitudes, with enough stars in each constellation to encompass the top half of the tunnel. She wanted to ensure the presence of a few star holes at eye level, to allow for views from both inside and outside the tunnel. 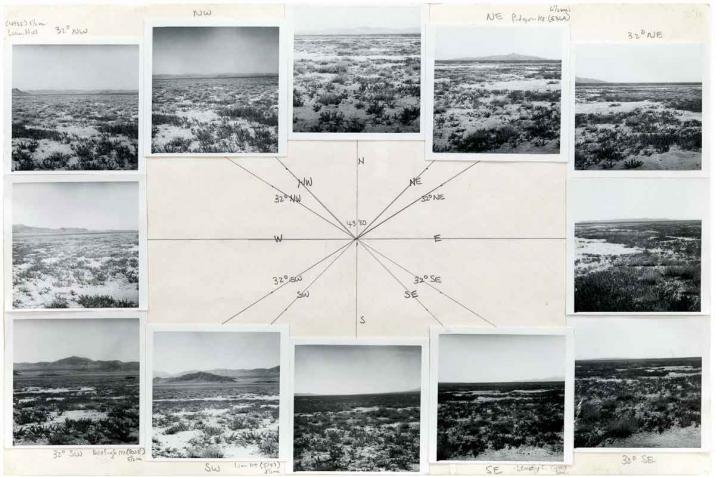 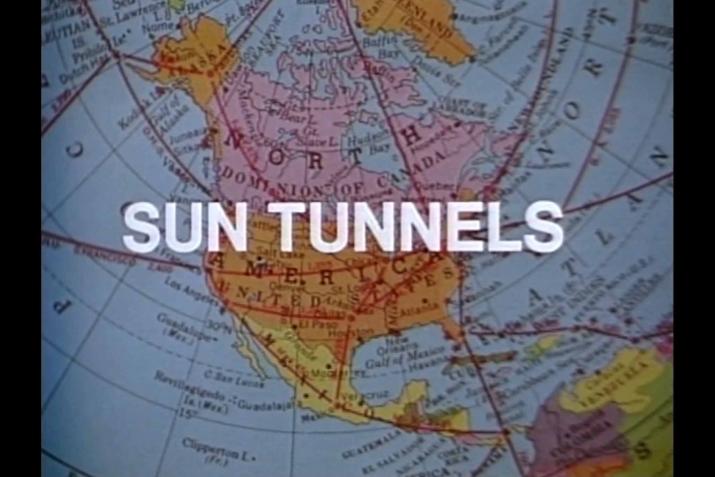 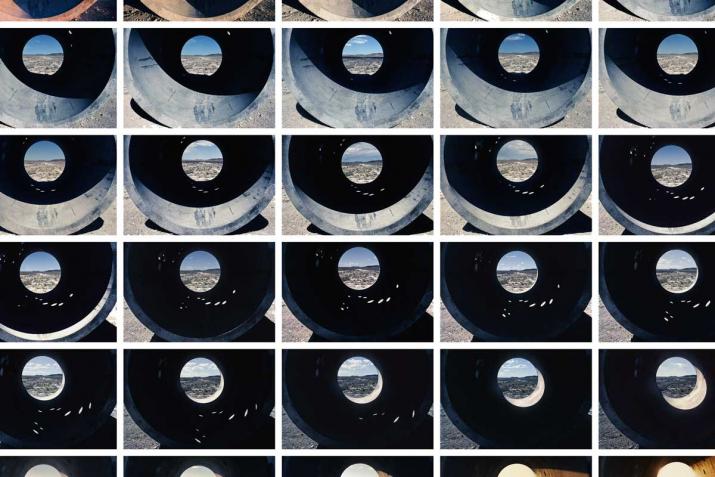 On July 14, 1976 Nancy Holt charted the evolving light and shadow falling to the interior space of one of the cylinders forming her landmark earthwork Sun Tunnels (1973-76). Every half hour, between 6:30 a.m. 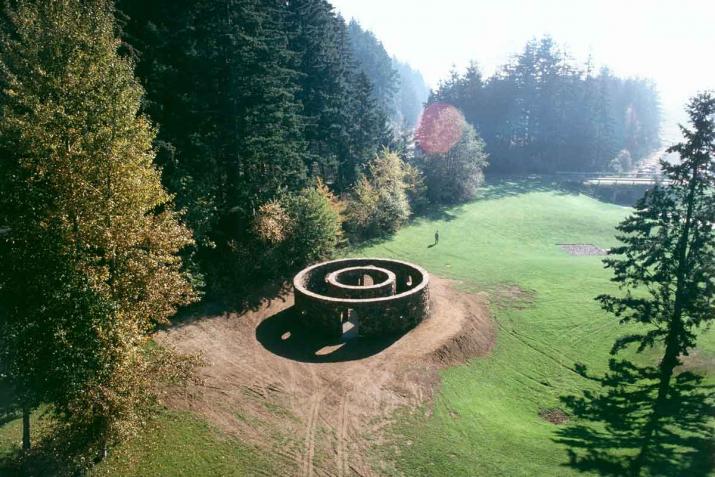 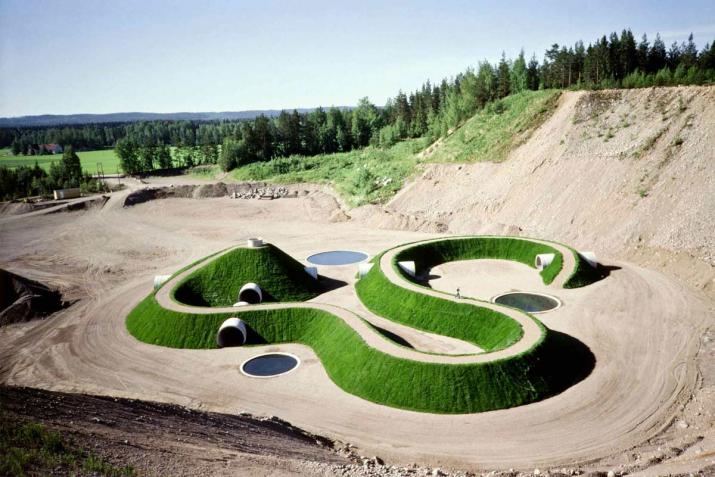 Up and Under
Nancy Holt
Pinsiö, Finland
Earthwork & Sculpture 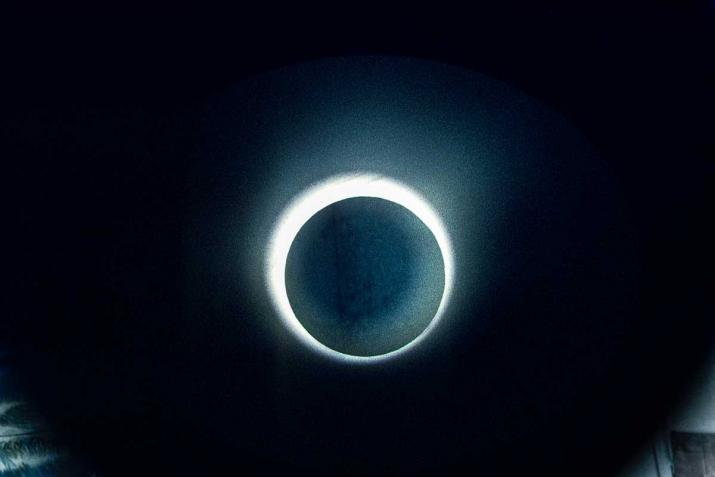