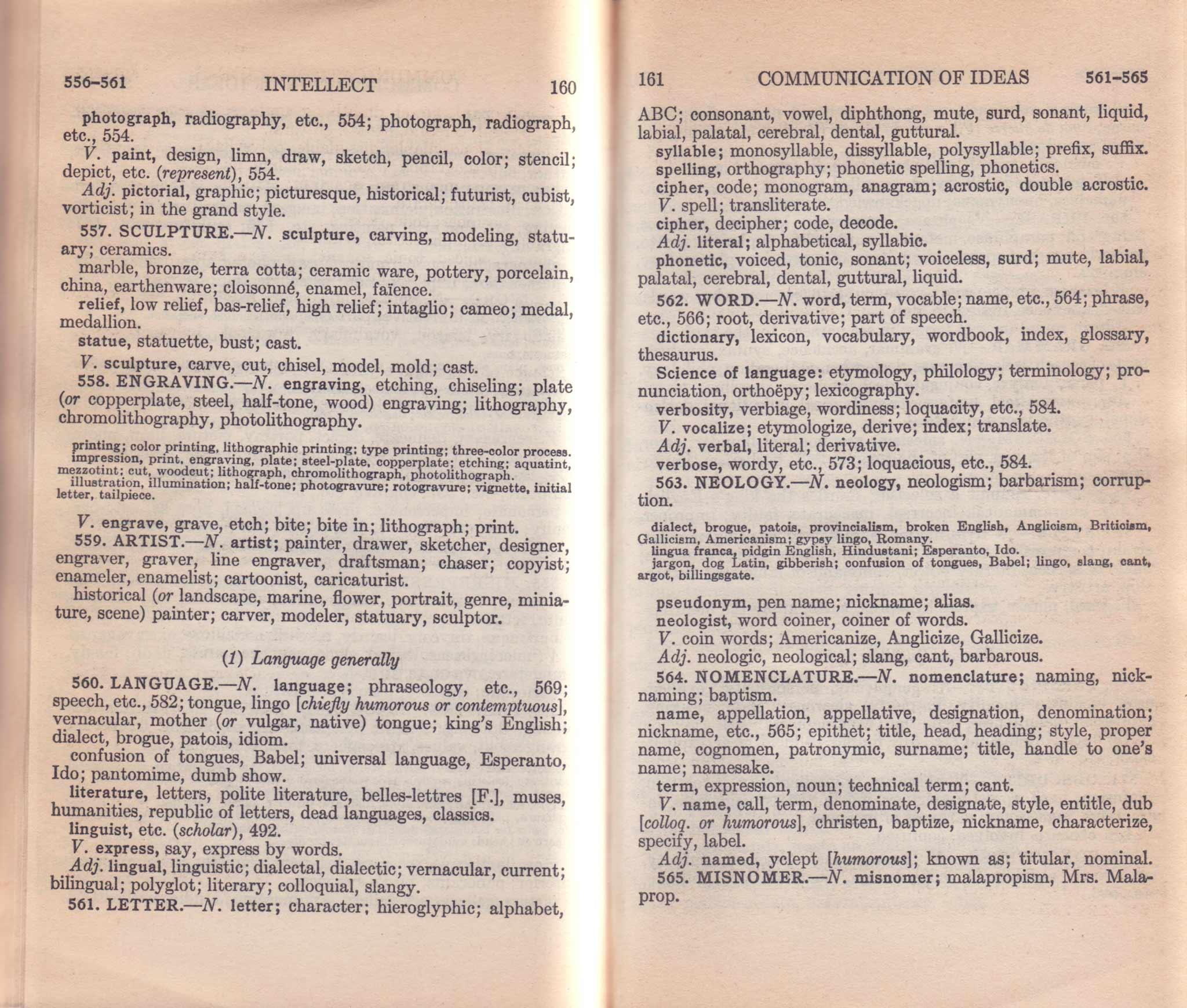 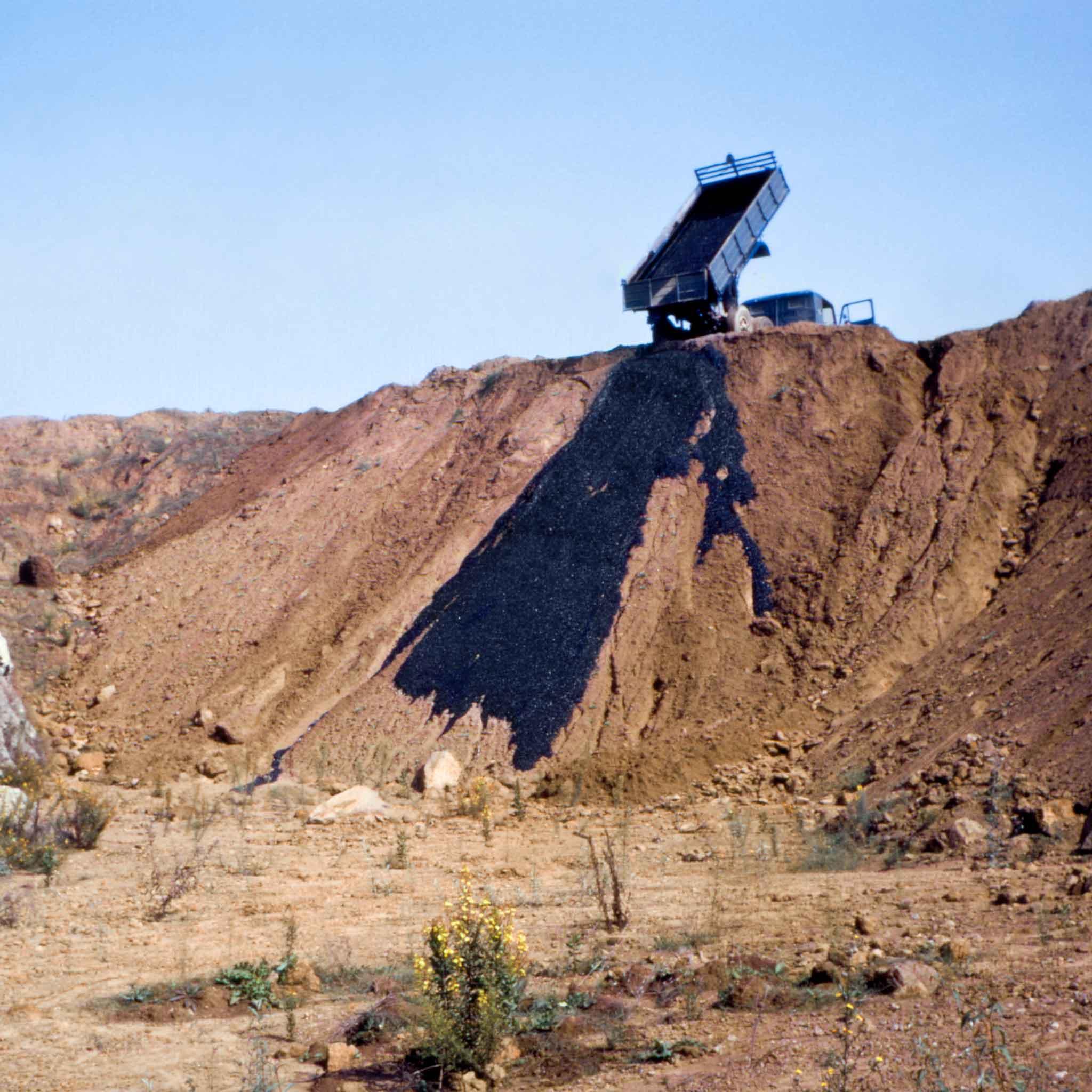 Felt marker and graphite on paper 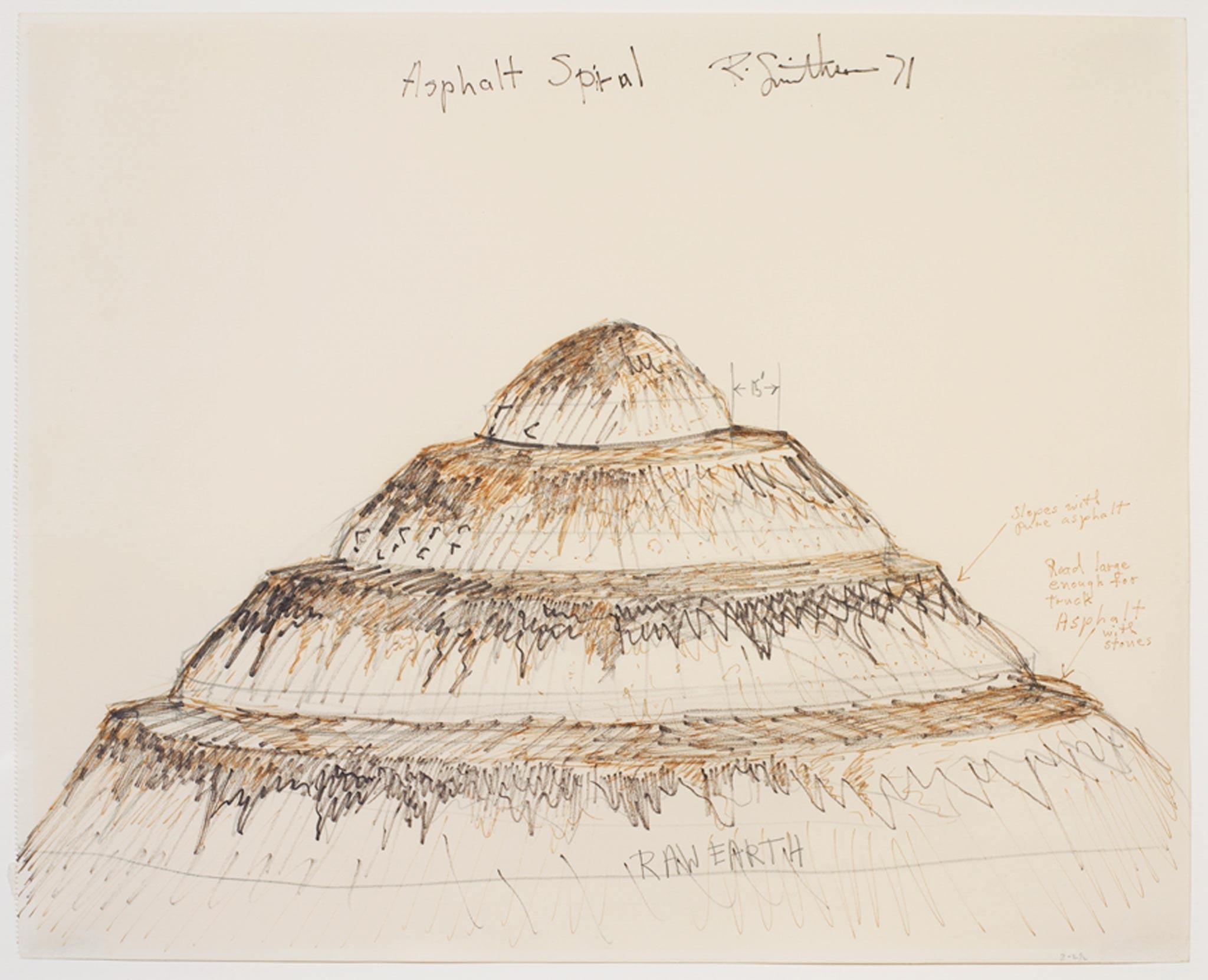 Felt marker and graphite on paper

A heap of Language

Cataloguing language about language, Robert Smithson's 1966 drawing A heap of Language1 inscribes itself at the intersection of minimalist sculpture, land art, architecture, conceptual art, and concrete poetry.2  Hand-lettered in pencil over a relatively narrow (6-1/2 x 22 inch [16.5 x 55.9 cm]) strip of blue-lined graph paper, the text records the entries following the lemma language in Roget's Thesaurus.3  A comparison with the specific edition used, however, reveals that the procedure is far from strict. Smithson omits a number of terms (polite literature before "belles-lettres," from the entry for linguist, for instance, as well as the headword lingual and the dialectic and current that follow); he mutes mute before "surd" and skips a half-dozen lines in Roget's before picking up the next word at the entry for word; his reading eye then begins to move down the thesaurus page at an angle like the accumulating heap, falling in an angled slant and then back filling the lines before becoming increasingly erratic in the final half-dozen lines of the heap. The shape of the heap, in fact, determines rather than results from the transcription. Tellingly, among the other deviations from a straight transcription, one can see Smithson promoting "slangy" ahead of "confusion of tongues" at the end of the fourth line; preferring "polyglot" to lingual at the end of the ninth line; substituting "code" and "cipher" for "gutteral" [sic]; "spelling," respectively, at the ends of the twelfth and thirteenth lines; and so on. In all cases the deviations were made to maintain the even incline of the heap. Sloping at about forty degrees, the text's margin mimics the angle of repose of moderately damp soil, sandy gravel, or crushed asphalt.4

Indeed, the drawing prefigures Smithson's Asphalt Rundown (Rome, 1969) the first of a series of variously viscous and particulate works of late 1969 and early 1970. The puns activated by the title sketch the work's associations: the descriptive downward flow of the asphalt dumped from a truck at "the top of an eroded hillside in an abandoned area of a dirt and gravel quarry";5  those abandoned, dilapidated industrial spaces and terrains vagues that so attracted Smithson; the gradual dissipation of entropy (as when a clock is said to run down); and even back to the exhaustive list enumerated by A heap of Language, since "to run down," denotes "to consider or describe all of, to go through; to list, enumerate."6  Similar events followed hard upon in the following months: Concrete Pour (Chicago, 1969); Glue Pour (Vancouver, 1969); and the soil heaped on the eponymous structure in Partially Buried Woodshed (Kent, Ohio, 1970) — a work that emerged after another alluvial project proved impractical (Smithson's initial plan was to create a "mudflow," but the Midwest winter temperatures prevented the congealed material from pouring).7  Smithson referred to these works as "flows," and one might read them as a wry, deadpan comment on the concurrent art of Fluxus [Latin for "flow"]).8  In any case, they invite readers to imagine A heap of Language as a conical section (and not merely a triangle) — the result of an entropic pouring forth of the thesaurus' entry, with words taking the place of asphalt or “a sort of dirt.”9  And here the title would seem quite precise: the Oxford English Dictionary defines a heap (as opposed to a pile, mound, hill, or other amass), as "a collection of things lying one upon another so as to form an elevated mass often roughly conical in form."

But here is also precisely where the seemingly straightforward procedure of the thesaurus transcription becomes complicated. To maintain the analogy with soil or asphalt, the words at the top of the entry in Roget's ("language; phraseology, etc., 569; speech" and so on) should be the first ones poured out, and logically they should reside at the bottom of the heap. Elsewhere, Smithson associated "heaps" with the spilling flows of entropic processes—"rock creep, debris slides, mud flow, avalanche" visible in "heaps around us"10 —but his lexical heap, in diametric contrast with the irreversible entropic flows of the alluvial works, figures the paradox of what Smithson called "ruins in reverse."11  Even discounting his strategic selection and arrangement of particular words (e.g. "slangy") — as if one of Maxwell's Demons had taken up copyediting—the drawing takes the form of an impossible sequence. The numbered graph paper heightens the impression; the words proceed like grains of sand in an hourglass flowing upward, the trajectory of the arrow of time inverted so that "the lines of his grids [...] waver between the future and the past."12  "Here the pages of time are paper thin, even when it comes to a pyramid."13

Smithson's lexical pyramid, indeed, might be read in the tradition of Concrete poetry, where typography enacts or figures its subject: in this case, an iconic cross-section of the monuments and ruins of ancient architecture that repeatedly captivated him and to which the language of his heap in fact refers. In Roget's Thesaurus, Smithson would have found heap as a synonym for pyramid (an association corroborated by the repeated "hieroglyphic"); furthermore, the term "Babel" of course inescapably evokes the tower that Smithson associated with the Egyptian pyramids.14  Rather than simplify the cultural and historical particulars with a tidy silhouette, however, the schematic ultimately thickens the plot. The grid undergirding Smithson's “pyramid made of word-bricks” has been linked to bricks since Neolithic prehistory.15  Moreover, the brick pyramids of ancient Egypt and Mesopotamia have been inextricably intertwined with written language. Cuneiform developed from incising smaller versions of the bricks used to build temples, and not only is papyrus symbiotic with the mud and silt that was worked into brick — the raw materials of building and writing both emerging from the same riparian ecosystem — but the pun at the heart of the Biblical story of the tower of Babel, a confusion of words about the confusion of words, conflates the rubble of its bricks with the unintelligibility of language: both scattered by Yahweh.16  Already courting the collapse of the great ziggurat of Babylon (from the Akkadian bāb-ilim [Gate of God]), with its millions of bricks, and the Tower of Babel, the logic of the parable hinges on the proximity of the Hebrew Bavel [Babel] to bālal [to mingle; to confuse], a word itself related to the mixing of particulates with water, as in the preparation of mud bricks.17

The coincidence of bricks and language, furthermore, has long mapped acute moments of social unrest, such as the racially charged riots breaking out across America at the very moment Smithson was creating A heap of Language. Throughout history, as Shannon Mattern puts it, "bricks and stones [...] have been transformed into symbolically charged projectiles; bricks, we might say, become an extension of the voice."18  Those bricks, at times, can speak louder than words. "A riot," as Martin King recognized, "is the language of the unheard."19  In such instances of riotous speech, bricks become a kind of language: another synonym for the catalogue Smithson heaps with his building blocks of words. "Sous les pavés [beneath the paving bricks]," as the rioters in Paris would write on the stone blocks of a Paris building less than two years later, "la plage [the beach]." As Smithson prefigures it: beneath the architecture of the grid, frame for the pyramid of lexical bricks, la page [the page].20

Aligning the page with sites for dumping excavated material underscores the act of appropriation in Smithson's deposition of language extracted from the thesaurus and displaced to his drawing. Indeed, Smithson associated the "heap" of language with private, hoarded intellectual property (the possessive in the tile of Roget's Thesaurus underscores the point): "Heaps of private information reduce art to hermeticism and fatuous meta-physics. Language should find itself in the physical world and not end up locked in an idea in somebody's head."21  He continues, with relevance for the graph-paper underlying his drawing: "a grid on a canvas is still a representation. Reducing representation to writing does not bring one closer to the physical world. Writing should generate ideas into matter, and not the other way around."22  Smithson's "sense of language," accordingly, was "that it is matter and not ideas — i.e., 'printed matter'."23  Although not printed, per se, the visual mass of his handwritten cursive makes the case for the materiality of language — a graphite minerality aligned with the molecularly similar bituminous asphalt — but what of the work's "matter" in the sense of subject matter, of the literary quality of its run-on "verbiage loquacity"? If, in the end, readers find that the jabbering agrammatical gabble makes for uninteresting reading, they might remember that the boring — as Smithson punned on the twin sense of excavation and tedium — was a site at which he explicitly linked heaps and language to his earthworks:

All language becomes an alphabet of sites. The boring, like other works, is becoming more and more important to artists. Pavements, holes, trenches, mounds, heaps, paths, ditches, roads, terraces, etc., all have an esthetic potential.24

Immediately preceding the language he copied from the thesaurus, Smithson would have found the entry for artist. He began transcribing immediately after the word sculptor.25

Craig Dworkin is the author of Reading the Illegible (Northwestern University Press, 2003), No Medium (MIT Press, 2013), and Dictionary Poetics: Toward a Radical Lexicography (Fordham, 2020), and is the editor of several collections, including Language to Cover a Page: The Early Writings of Vito Acconci (MIT Press, 2006) and, with Kenneth Goldsmith, Against Expression: An Anthology of Conceptual Writing (Northwestern University Press, 2011). He has lectured at the Whitney Museum of American Art (New York), Guggenheim (New York), Museum of Modern Art (New York), the Institute of Contemporary Arts (London), and the Whitechapel Gallery (London) among other venues, and currently teaches literary history and theory at the University of Utah.

Dworkin, Craig. "A heap of Language." Holt/Smithson Foundation, May 2019. https://holtsmithsonfoundation.org/heap-language-0.