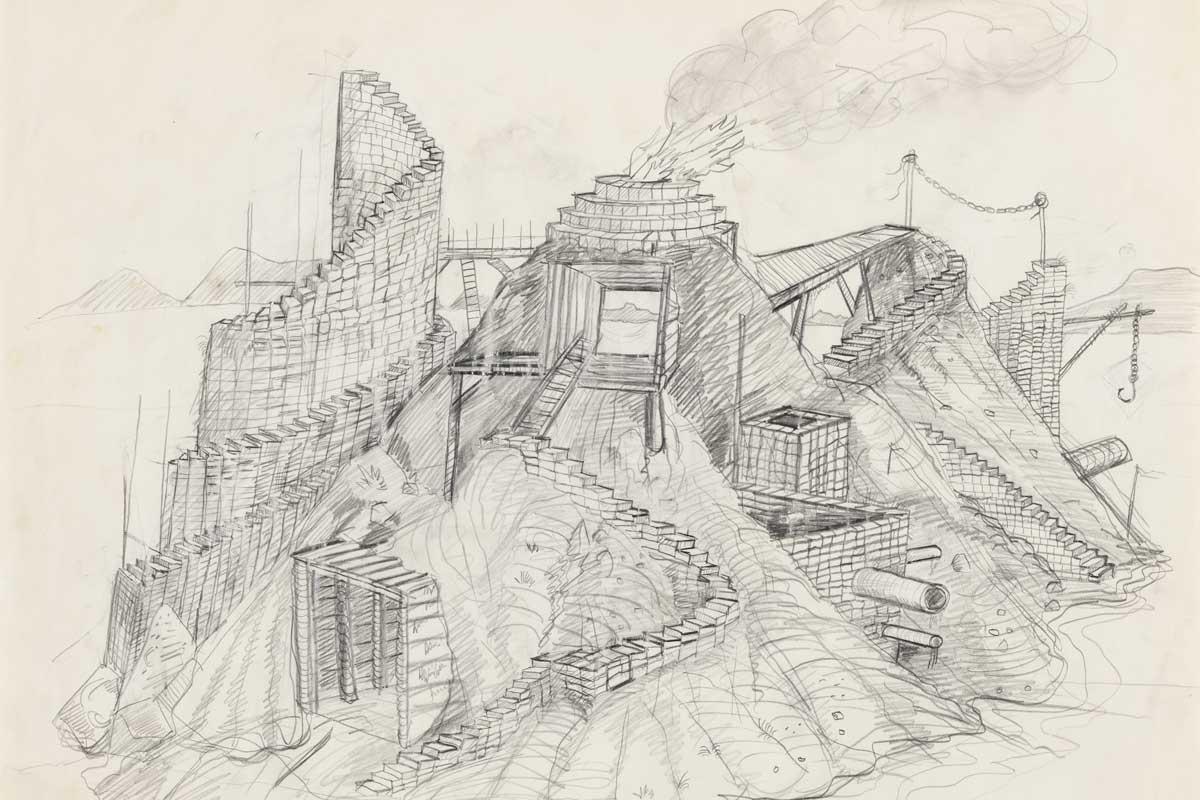 Marian Goodman Gallery London and Holt/Smithson Foundation are pleased to announce the first solo exhibition of Robert Smithson in the U.K. Hypothetical Islands will be on view from December 2, 2020 to January 9, 2021.

Hypothetical Islands pays attention to Smithson’s enduring interest in islands. It presents over fifty works spanning 1961 to 1973, many of which are being exhibited for the first time in many decades. For Smithson, islands were speculative sites showing the constantly changing surface of our world and the limits of human knowledge. Some of his islands are locations for sculptural invention, others are sites investigating the formation of landscape through earthworks and sculptures. The selection of works will move from mobile to spiral islands, through forking jetties, meanders, concrete seas and rising volcanoes.

An autodidact, Smithson's interests in travel, cartography, geology, architectural ruins, prehistory, philosophy, science fiction, popular culture and language spiral through his work. In his short and prolific life, Smithson produced paintings, drawings, sculptures, architectural schemes, films, photographs, writings, earthworks and all the stops between. From his landmark earthworks to his 'quasi-minimalist' sculptures, Nonsites, writings, proposals, collages, detailed drawings and radical rethinking of landscape, Smithson's ideas are profoundly urgent for our times. By exploring the conceptual and physical boundaries of landscape Smithson raised questions about our place in the world, their relevance heightened as the dangers of global warming move ever closer.

Smithson’s conceptual islands explore time, limits, scale and human collaboration with geology. The exhibition includes a continuous film program focusing on Smithson’s earthworks and interest in geological agency, featuring two previously unseen 1971 films—Bob with Books and Mangrove Ring. A careful selection of drawings demonstrate his unrivaled capacity for invention. In 1970 he explained, “I like landscapes that suggest prehistory. As an artist it is sort of interesting to take on the persona of a geological agent where man actually becomes part of that process rather than overcoming it.” Three years later he declared, “Imagine yourself in Central Park one million years ago. You would be standing on a vast ice sheet, a 4,000-mile glacial wall, as much as 2,000 feet thick. Alone on the vast glacier, you would not sense its slow crushing, scraping, ripping movement as it advanced south, leaving great masses of rock debris in its wake.”

Hypothetical Islands is accompanied by a simultaneous exhibition, Primordial Beginnings, at Galerie Marian Goodman, Paris. Both exhibitions will feature rarely seen works from the personal collection of the artist Nancy Holt (1938-2014). Holt married Smithson in 1963 and managed his Estate between 1973 and 2014.

Hettie Judah on Hypothetical Islands in The Guardian