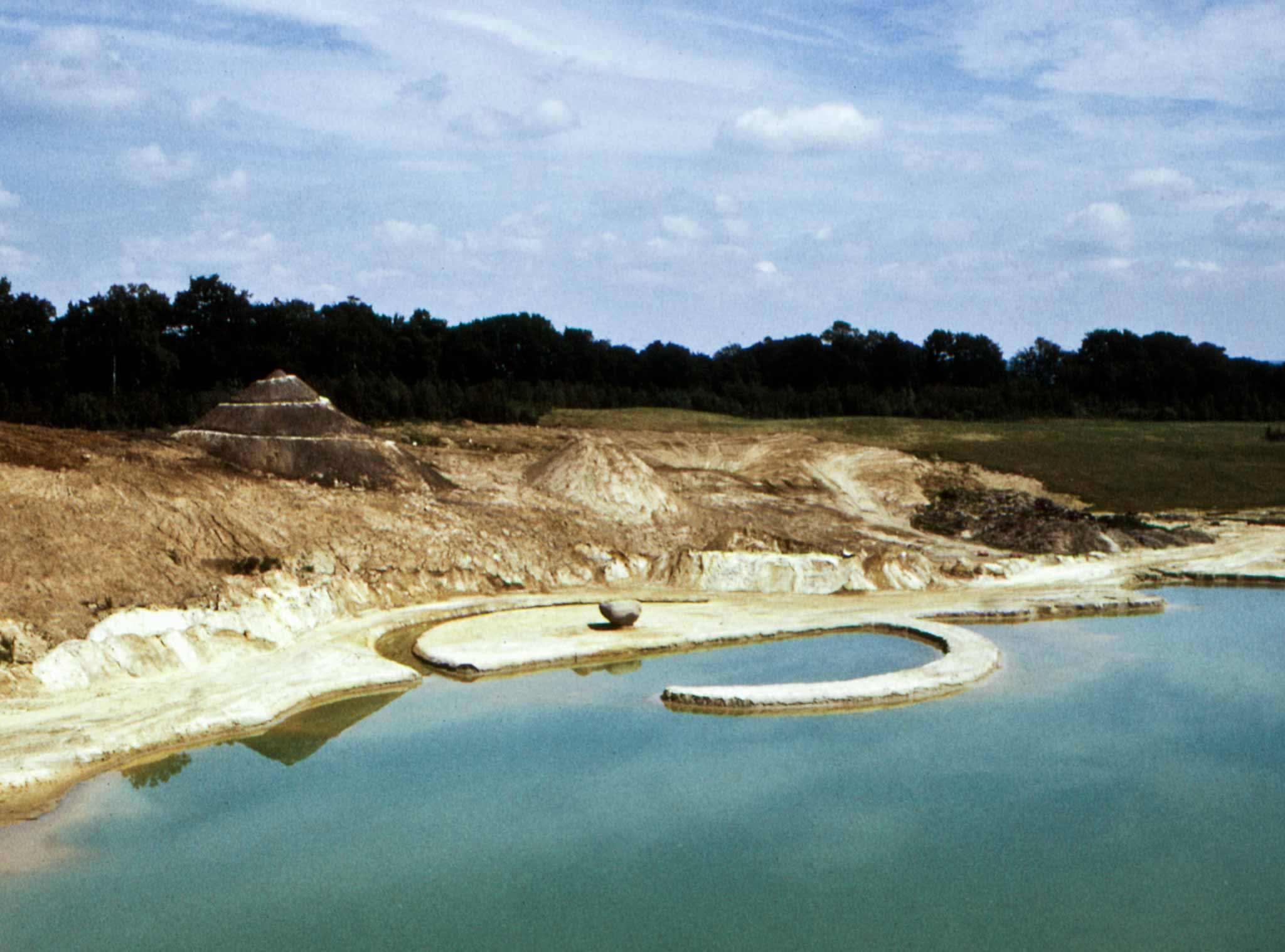 Broken Circle shortly after completion in 1971. 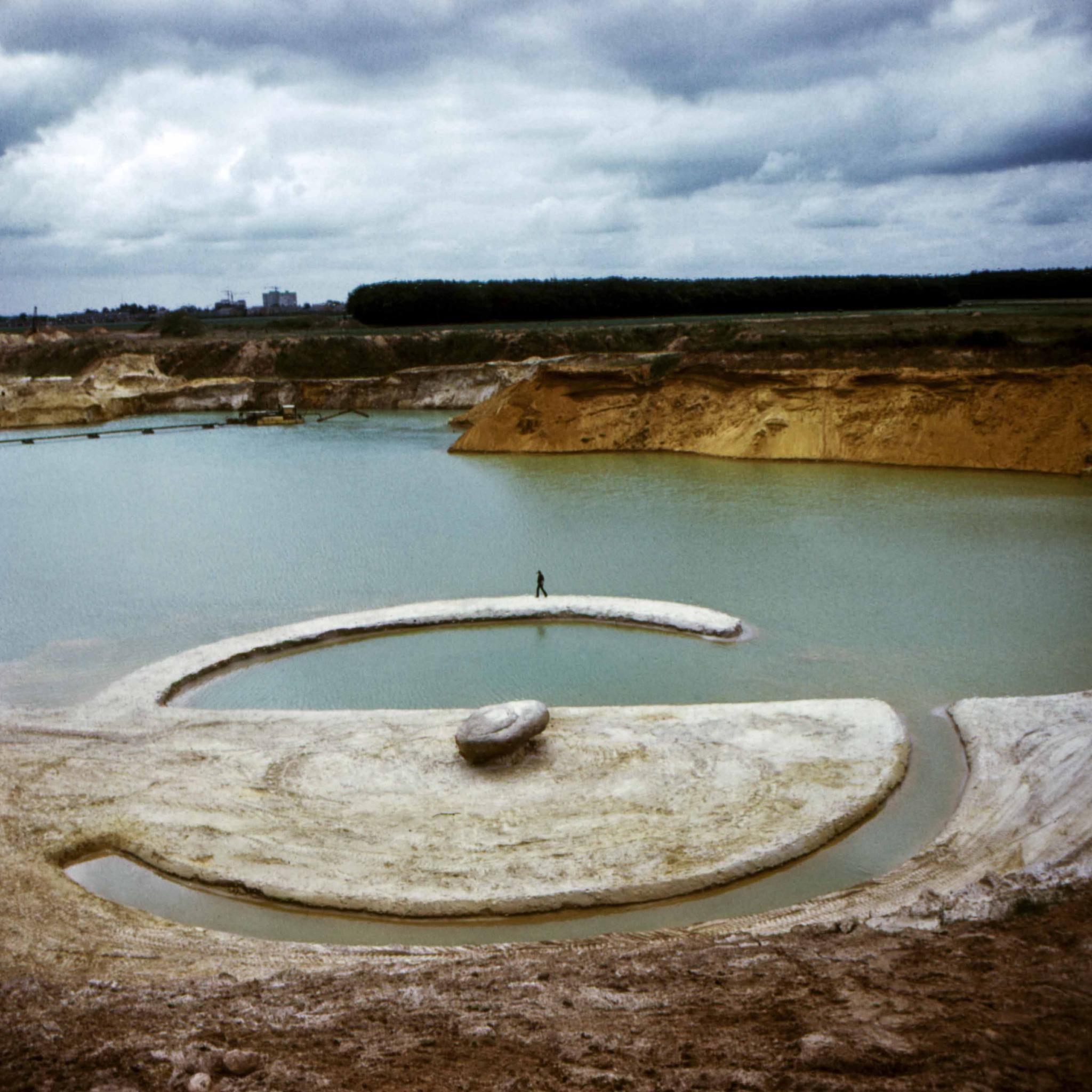 Broken Circle shortly after completion in 1971.

Spiral Hill shortly after completion in 1971. 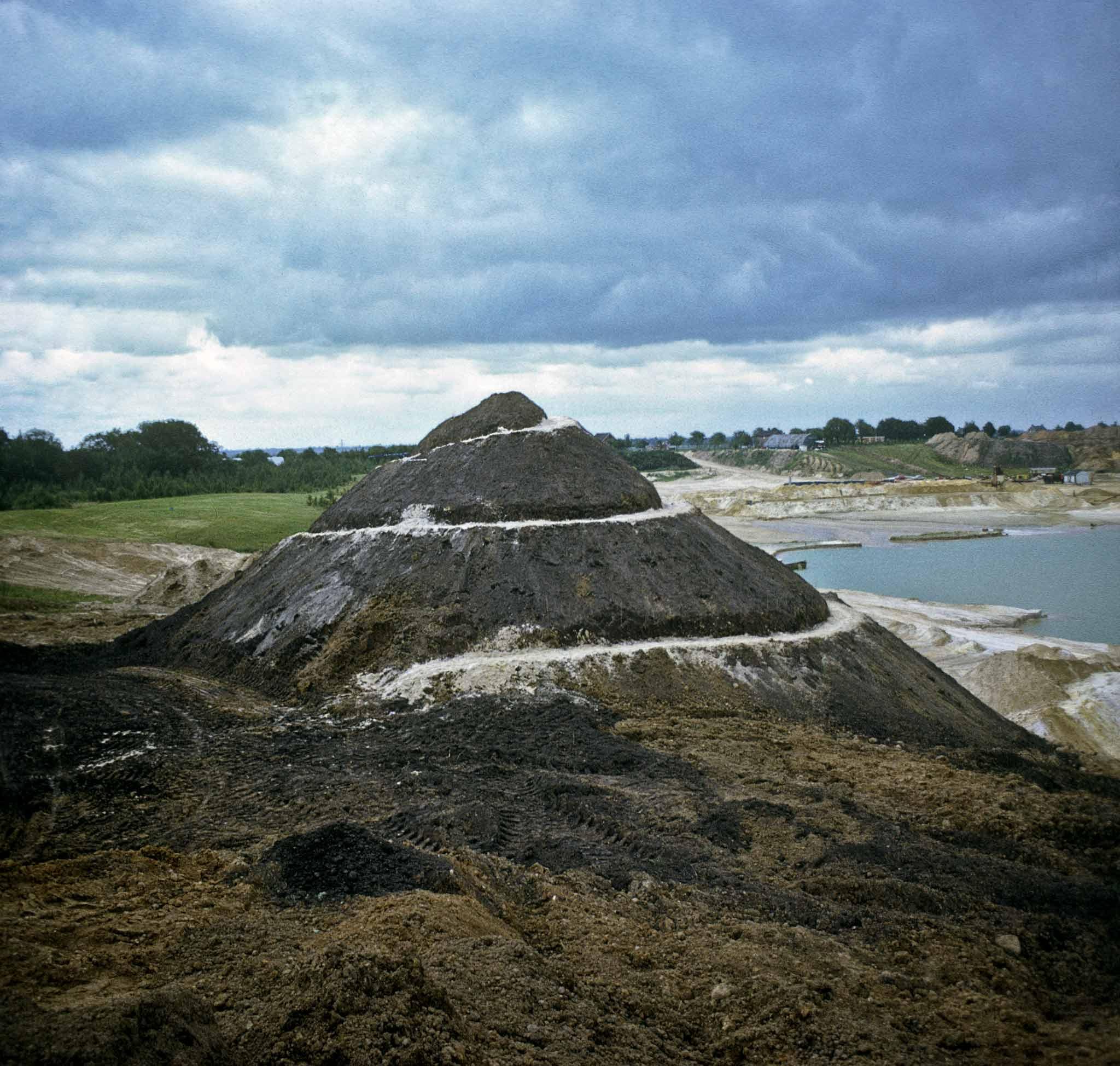 Spiral Hill shortly after completion in 1971. 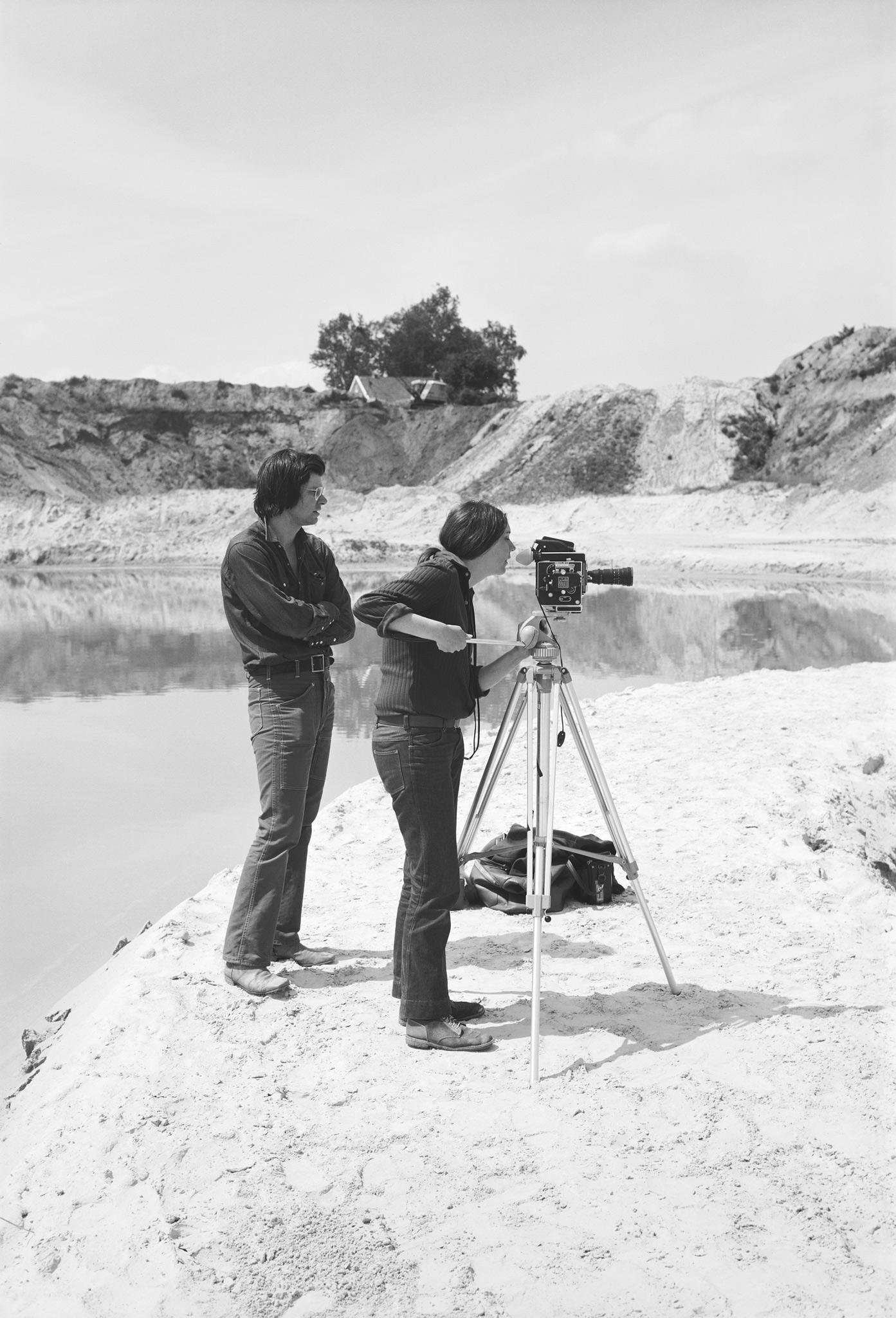 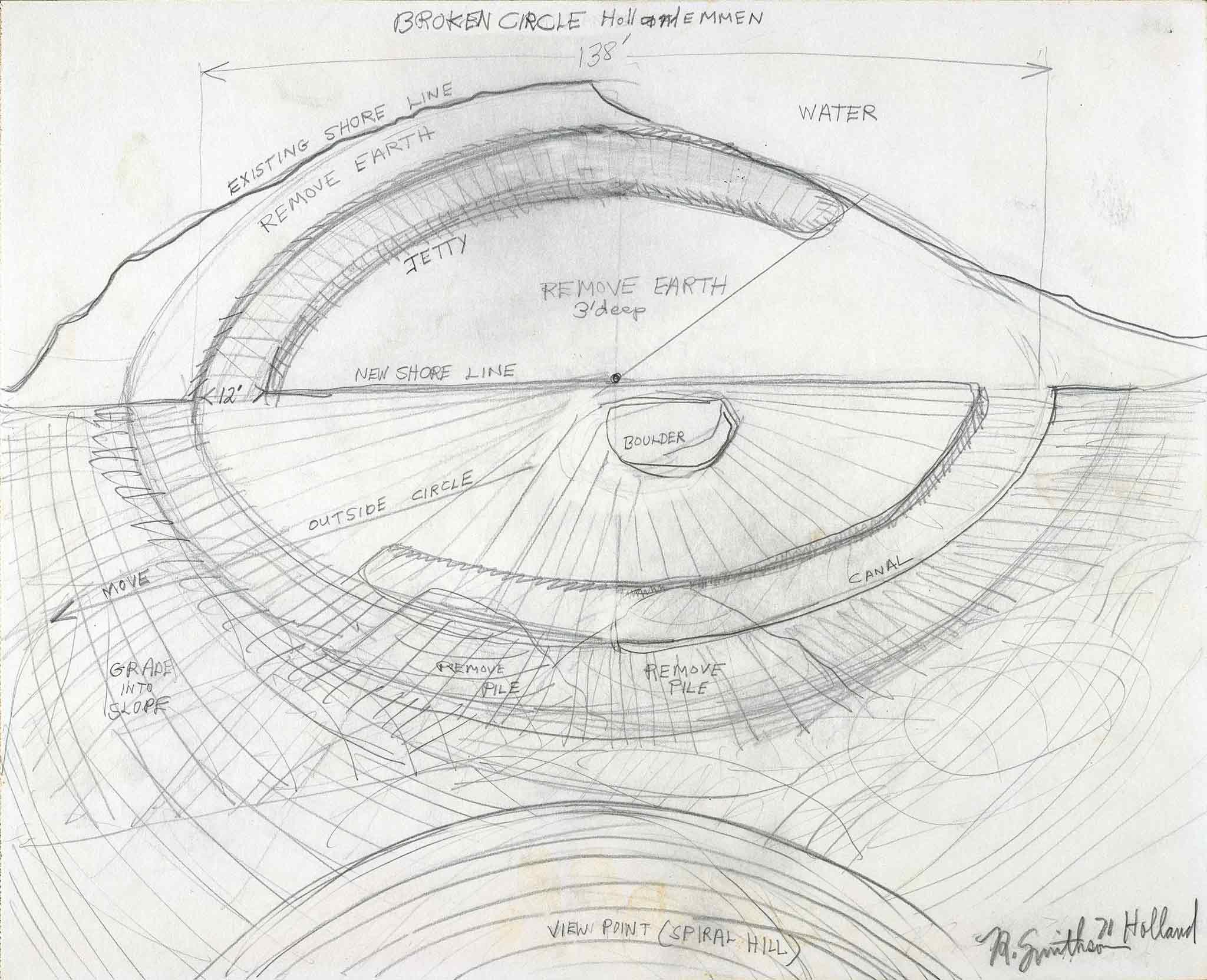 Broken Circle and Spiral Hill: having entropy the Dutch way

“This is a major work, I want to have good reproductions in magazines. I want the piece to remain forever. Please help!”

This cri de coeur was uttered by Robert Smithson in a letter to the Dutch curator Wim Beeren in 1971.1  Smithson was iterating an earlier request for receiving professional (aerial) photographs of his most recent earthwork Broken Circle/Spiral Hill. Beeren had commissioned it for the international open-air exhibition Sonsbeek Beyond the Pale, which ran throughout summer 1971 in various locations across the Netherlands. Smithson’s contribution was one of the most remotely located pieces. The artist chose an active sand quarry with a round-shaped jade-green quarry lake located on the edge of the town Emmen in the rural North-Eastern province of Drenthe.2  In contrast to the flat polder landscapes with their grid of canals that dominate the central part of the Netherlands, the site in Emmen complied with Smithson’s preference for exposed geological strata and the disrupted appearance of postindustrial landscapes. As the artist explained, he was “looking for an area that was somewhat raw because Holland is so pastoral, so completely cultivated and so much an artwork in itself”.3

The actual building of Broken Circle/Spiral Hill was accomplished within a couple of weeks, thanks to the expertise of the local surface mining company that exploited the quarry. Broken Circle/Spiral Hill cohabited with this mining company until it closed down in 2018. This unique symbiosis of a piece of Land art and a mining company makes Broken Circle/Spiral Hill the only full-fledged “reclamation piece” ever realized by the artist who invented this genre. A year after its completion, in a letter to the president of the American Mining Congress, Smithson argued that “[e]arth art could become a visual resource that mediates between ecology and industry. Current land reclamation projects lack sufficient imagination to catch the public eye. […] Many ecologists tend to see the landscape through 19th century eyes, while many industrialists see nothing but profit. I am developing an art consciousness for today free from nostalgia and rooted in the processes of actual production and reclamation.”4

Even from our twenty-first-century perspective, Smithson’s aesthetic approach to disrupted landscapes and his ambition to create monumental art within a dynamic field of ecological, economic, and socio-political forces is daring and visionary. The artist’s sudden death in 1973 put an end to its evolution and cut short his attempts to raise further awareness for Broken Circle/Spiral Hill’s artistic potential. The work has gained incomparably less art critical attention than its slightly older sister Spiral Jetty (1970). The majority of its conceptual, semantic, and aesthetic treasures are still waiting to be raised. The gem this essay picks out to look at is the way in which Broken Circle/Spiral Hill stages entropy within the context of the Dutch landscape and its history.

Entropy is a term from the realm of physics that Smithson appropriated and enriched through associations, turning it into a fluid artistic concept that would inform his aesthetics of postindustrial sites and his general conception of creative processes. Originally defined by the Second Law of Thermodynamics, entropy is a measure of disorder.5  Over time, isolated systems devolve into less pronounced states—they tend to maximize their entropy—until they reach equilibrium. This occurs on the level of particle distribution in space as well as on the level of heat distribution. Entropy adds unpredictability, randomness, and disorder—or rather, dedifferentiation—to our understanding of the universe and the occurrence of change within it. Throughout the 1960s scholars sought to apply understanding of entropic processes to various lateral fields, such as information theory, economics, ecology, and even art.6  Being a voracious reader with a wide range of interest, Smithson was aware of a number of these applications.7  His own conception of entropy evolved over the years, and is difficult to pin down. In an interview from 1973 Smithson described entropy as a condition that is irreversible and moving towards a gradual equilibrium.8  Entropy to Smithson also meant decreasing organization and a loss of distinctiveness, often as a result of “the clash between uncoordinated orders”.9  In what follows I will explore how these notions are articulated by Broken Circle/Spiral Hill.

“The most beautiful world is like a heap of rubble tossed down in confusion.”10  This quote by Heraclitus, cited by Smithson in his essay “A Sedimentation of the Mind,” perfectly fits the site into which Broken Circle/Spiral Hill is embedded. The quarry in Emmen is situated on the edge of a terminal moraine. The deposits of sand and gravel that can be found here are the fringes of a massive flow of material pushed forward by a glacier during the last Ice Age. In 1971 the quarry was flanked by walls of earth with sedimentation layers in different colors—red, yellow, white, brown and black—which made a dramatic contrast with the jade-green water of the lake. Smithson was attracted not only to this color scheme, but also to the “sunken” appearance of the site.11  Today, with most of the multi-colored earth walls having been excavated, the site appears even more collapsed.

Broken Circle/Spiral Hill is a bipartite work, built into and on the shore of the quarry lake. Broken Circle has a circular shape, like the quarry, and is made one half of sand and one half of water—materials that are less solid and thus more inclined to spread and disseminate than the basalt rocks of Spiral Jetty. The draglines, sand pistons, and controlled flooding technique used for its construction are the same as those used for excavating the site. Like other international artists that have realized Land art projects in the Netherlands, Smithson was fascinated by Dutch history of fighting the onrushing sea and the longstanding expertise in water management and land construction. The film that he planned to make about Broken Circle/Spiral Hill was to contain historical footage of the great flood that devastated parts of the Netherlands in 1953.12  Today, a sense of drowning is still evoked in a visitor standing on Broken Circle’s flat sand jetty, which extends only a couple of centimeters above the water surface. The vastness of the lake, which is increased by the fact that its surface reflects the sunlight like a giant mirror, gives you the feeling of gently drowning in space.13

Spiral Hill articulates entropy in a different way. The hill is made of black soil, and originally had a pointed cone shape. A footpath made of white sand spirals uphill counterclockwise. Yet, soon after the Sonsbeek exhibition had closed down, Spiral Hill threatened to fall apart due to natural erosion. Eventually, the hill was fortified by planting it with low shrubs.14  Its present somewhat collapsed and “bearded” appearance is an image of entropy in itself. What is more, a visitor who first walks to the edge of Broken Circle’s jetty and then turns around to climb Spiral Hill inadvertently enacts the clockwise and counter-clockwise movement mentioned by Smithson in his most often-cited illustration of an irreversible entropic process: a sand box divided in two sections, one filled with black sand, the other with white sand.15  Having a child run across the sand box clockwise will result in a mixture of black and white sand. Having the child then run across the sand counterclockwise will result in more dedifferentiation, not a reversal of it. The works of entropy cannot be undone.

The notion of dedifferentiation is crucial to Smithson’s understanding of entropy as a creative force. He derived it from Anton Ehrenzweig’s writings on the psychology of art making—most probably from The Hidden Order of Art (1967).16  Here, dedifferentiation designates a diffuse syncretistic and mostly unconscious vision that allows the artist to grasp an impending order in what, to a more focused perceiver, would appear as an unorderly agglomeration of heterogeneous elements. Dedifferentiating vision deviates from more conscious gestalt perception that discriminates between figure and background. Ehrenzweig illustrates this with a Rubin double profile of two faces kissing each other.17  Normal gestalt perception will focus on one of the profiles and treat the other one as the figure’s background. Dedifferentiating vision, by contrast, is able to perceive both faces and their interconnection at once. The shape of Broken Circle works similarly: to perceive it as coherent in itself, the viewer has to blend the parts made of sand and water and perceive them as being part of a single shape. This is only possible if the work is viewed from an elevated position: the viewer has to stand on top of Spiral Hill or look at an aerial photograph of the work. Seen from that perspective, it is difficult to not think of the yinyang symbol or diagram, which in Chinese philosophy represents the dynamic equilibrium between opposing forces.18

Albeit his tendency to diagrammatic thinking and representation, Smithson, to my knowledge, never explicitly linked his work to Eastern philosophical concepts.19  In fact, the visual association with the yinyang symbol is strengthened by an element that the artist did not intend and initially disliked: the large boulder that sits right in the middle of Broken Circle’s half-moon shaped peninsula. The stone appeared from the ground when Broken Circle was constructed, and turned out to be too heavy to move. Eventually, Smithson accepted its unwanted presence as “an entropological manifestation” which linked his work to the burial chambers made of megaliths that can be found in this area.20  The artist’s description of the boulder as “the eye of a hurricane,” “a cyclopian dilemma,” “a dark spot of exasperation,” and “a glacial heart of darkness”21  throw a sinister light on the giant stone. They seem to suggest that death casts its shadow on any arcadian utopia, even in the sun-lit Dutch countryside.

Notions of disorder, decay, loss of boundaries, loss of self and even death are inseparably connected to Smithson’s conception of entropy.22  Only by facing and accepting the possibility of entropic disintegration can the artist perceive an impending new order. Smithson’s Land art projects, especially Broken Circle/Spiral Hill, are manifestations of his “entropic” approach to postindustrial landscapes. As the artist declared: “With my work in the quarry, I somehow reorganized a disrupted situation and brought it back into another kind of shape.”23  The fact that this shape itself remains subject to entropic forces makes it both fragile and topical. In a world that seems to be falling apart as the old structures it relied upon crumble, we need to learn how to let new structures evolve from the entropic situations that we have co-created. Not by reinforcing structures that reiterate what we already know but by immersing ourselves in the frightful reality that we presently confront. An artwork like Broken Circle/Spiral Hill can help us to learn how to linger in an entropic situation without freezing with fear. It invites us to not only endure but savor its dedifferentiated appearance. Doing so is a precondition for being able to perceive new patterns that may arise from what for the moment looks like a grey mash.

Anja Novak is a scholar in the field of modern and contemporary art history, based at the University of Amsterdam. Originally trained as dancer, she obtained her PhD in art history from Leiden University with a dissertation on the spectatorship associated with Installation Art. Her research focuses on artforms that involve a space-time dimension and emphatically demand the live presence of an embodied viewer, such as Installation Art, Performance and Land Art. Her research is connected to the Affective turn in Art History, to research centering on the notion of atmosphere and to Ecological Psychology and Enactivism. 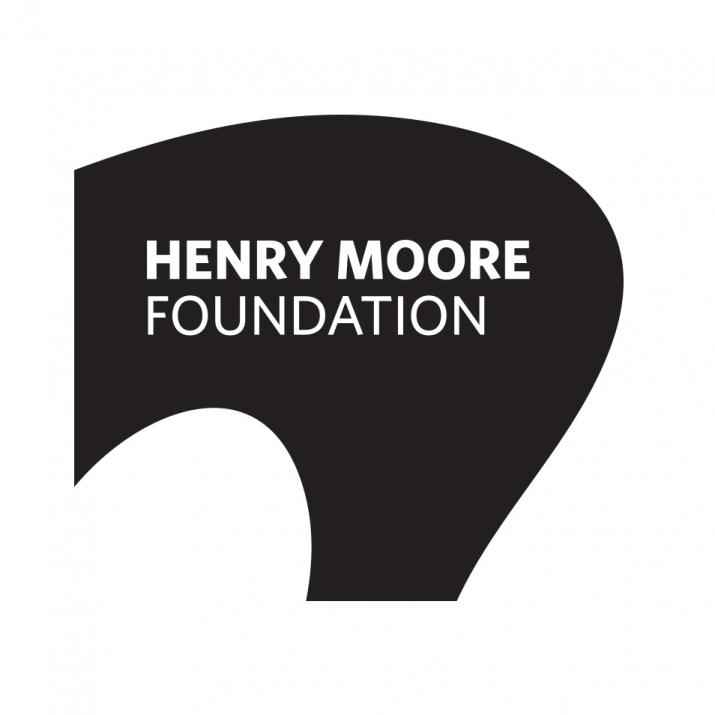