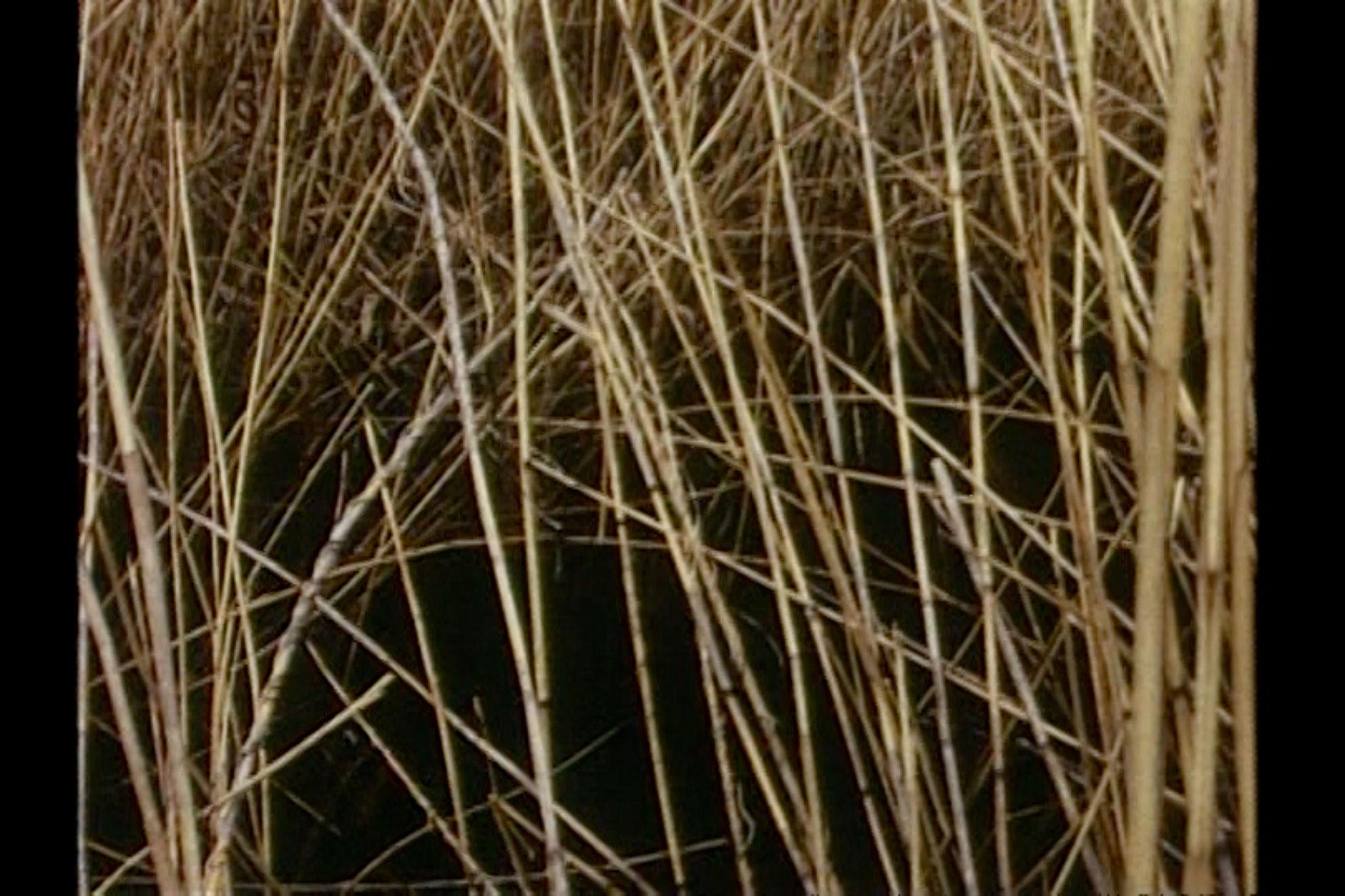 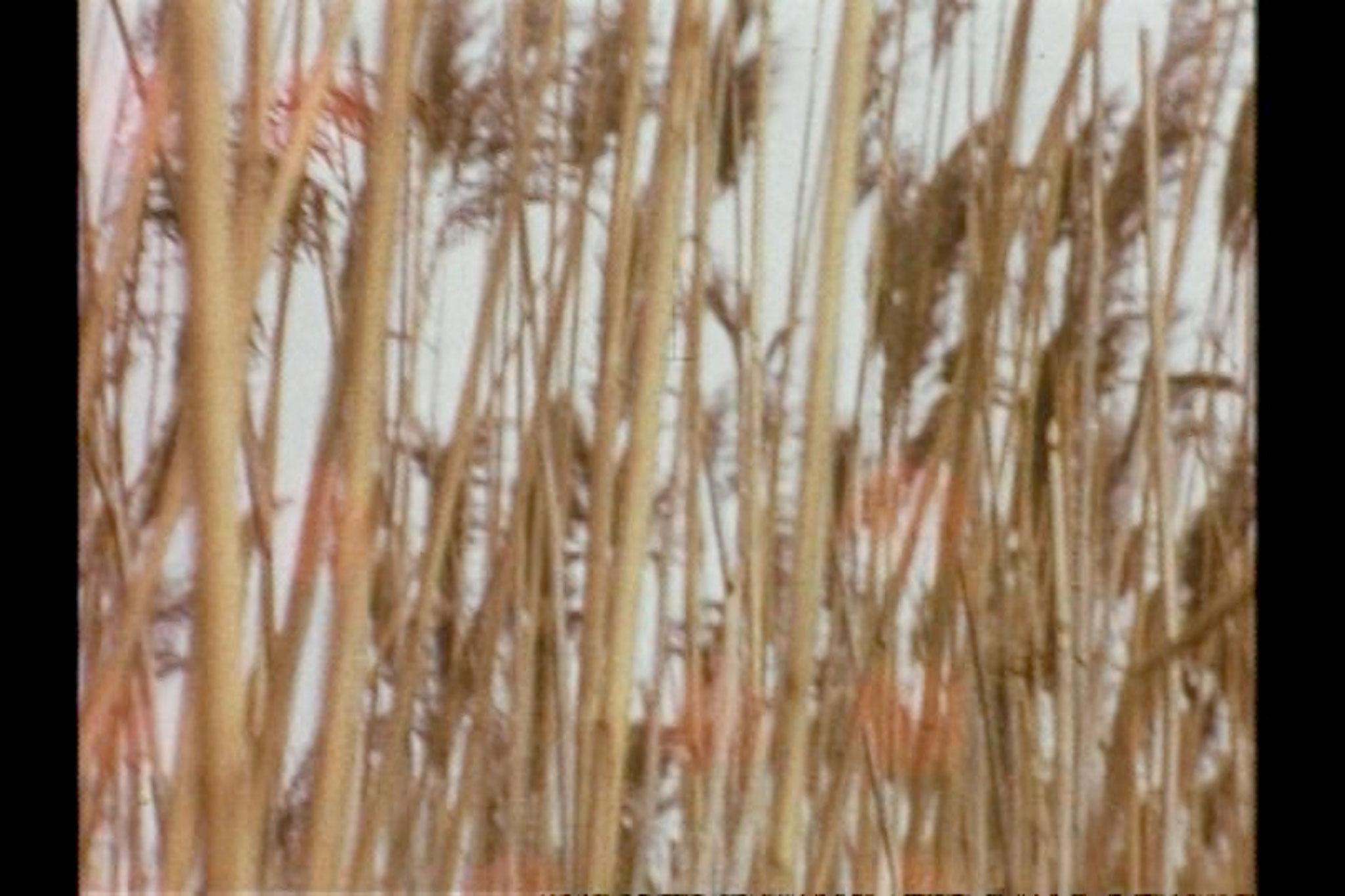 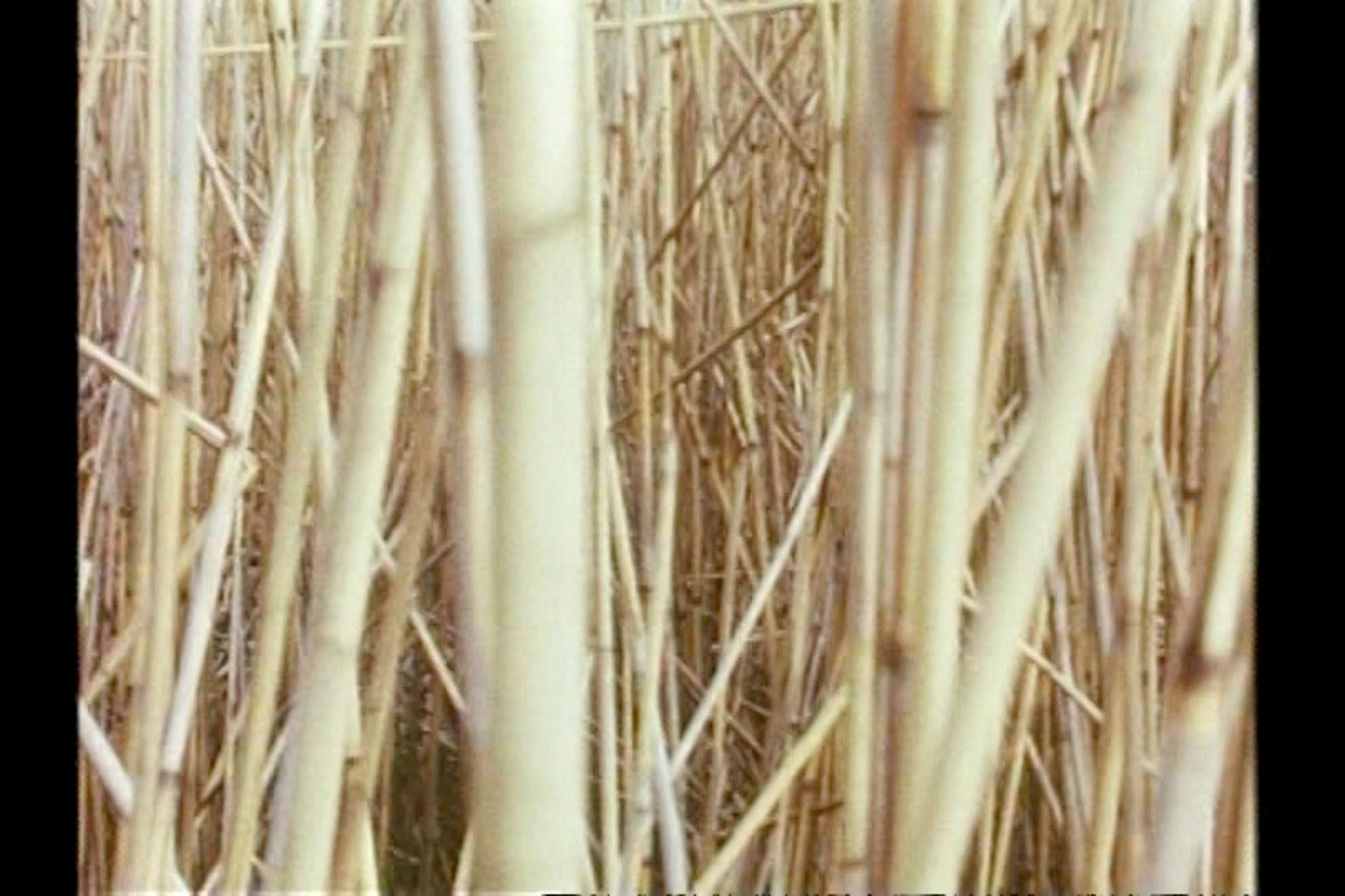 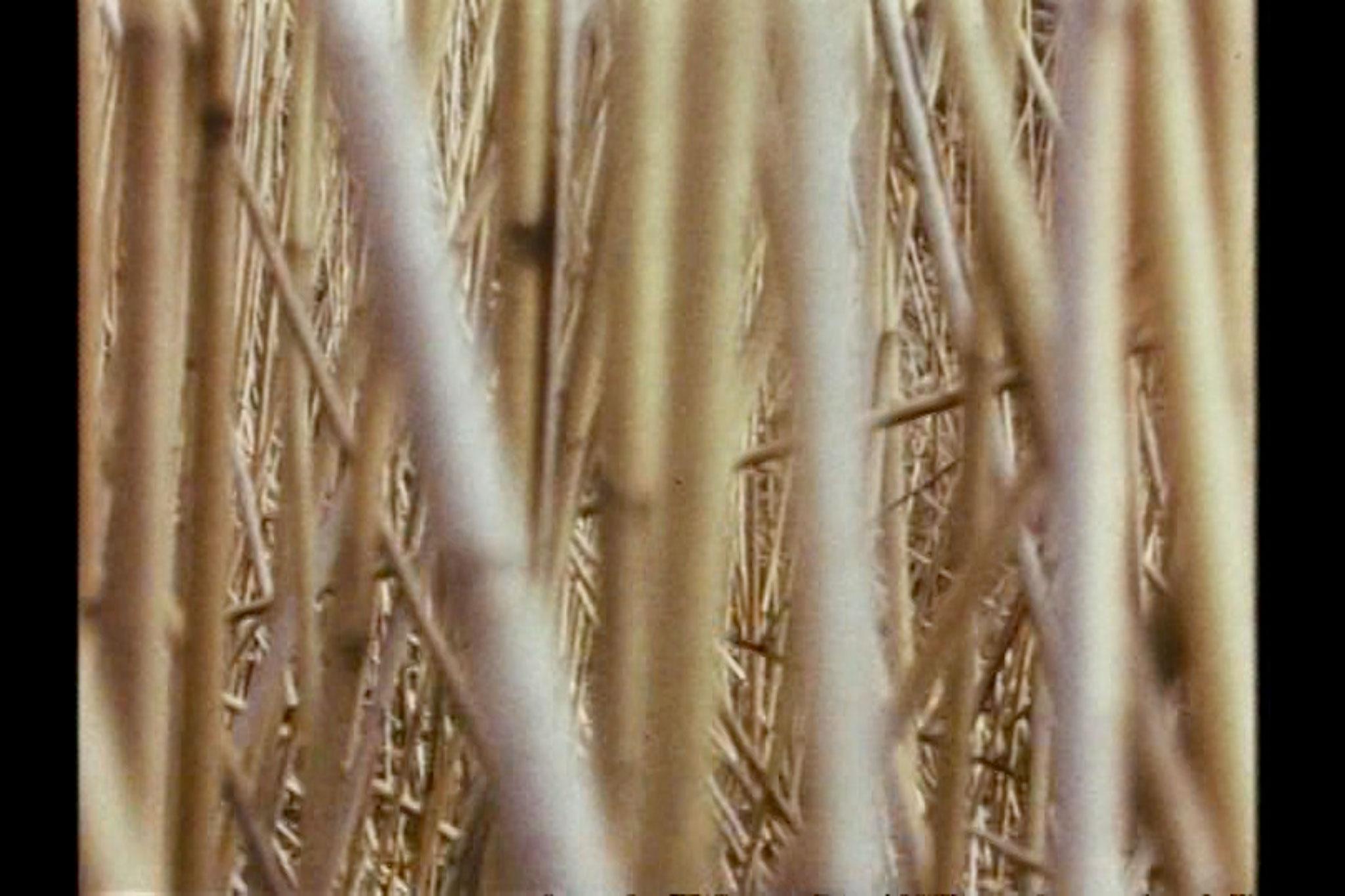 Voice and Vision in "Swamp"

The film opens with a disembodied male voice and a landscape in motion. “Just walk in a straight line,” the man directs, as the camera advances tentatively towards an expanse of tall grasses. “I think, I think I am,” replies an unseen woman, the camera inching forward into the reeds. “Straight in…to that clump,” the man continues. “It’s OK, Nan, you’re on fairly solid ground. Straight in. Just go right in.…”

In 1971 Nancy Holt and Robert Smithson traveled to the New Jersey Meadowlands to make Swamp, a 16mm color film that interrogates perception through the camera lens. For six minutes, Holt and Smithson thrash through thick swamp grasses while Holt films with her Bolex camera, guided only by what she can see through the camera eye and hear of Smithson's verbal instructions. The viewer experiences the couple’s walk from Holt's point of view, seeing the reeds in tight close-up and hearing Smithson's spoken directions. As the artists struggle through the marshy landscape, vision is obstructed and perception distorted; reeds crash against the camera lens and become increasingly abstracted. Unfolding as if in real time,1  Swamp is an exercise in poetic frustration; the artists’ progress is impeded, their path leads nowhere. Halfway through the film, Smithson instructs Holt to “make an about face…Go back the way you came.” The last exchange we hear, before the film runs out and the image cuts abruptly to black: “What does it say?” Holt asks. Smithson responds, “Nothing.”2

“What you see is what I see. I had the camera vision,” Holt commented of Swamp. “You’ll see the difference between conceptual directions and what’s possible visually and with the senses, in limiting yourself to the vision of the camera itself.”3  Despite—or perhaps because of—these limitations, the viewer’s sensory experience of the film is heightened. One hears the whirring of the camera, the artists’ footfalls as they labor through the mud, and, as the camera (and Holt/the viewer) are enveloped by marsh grasses, the sibilant crashing of the reeds. Neither Holt nor Smithson’s body is ever seen; the artists’ presence is manifest through their voices and their sight. As the artists plunge deeper into the blades, the extreme close-up vision affords a startlingly visceral and intimate point of view. The shaky, hand-held camera, in constant motion, becomes an extension of Holt’s body; we inhabit her subjectivity. Although the viewer shares Holt’s camera vision, neither artist can see what the other sees. Swamp exposes the gap between reality as experienced through the senses and mediated through the camera lens. Together Holt and Smithson attempt to map out parameters of perception and representation, charting the process of perceiving how we perceive—or fail to perceive—through language, vision, space, time, and technology.

Swamp embodies ideas that engaged both artists, not the least of which is the importance of place. Although Holt and Smithson are most often associated with the monumental landscapes of the American West, the natural and industrial ecosystems of New Jersey figure prominently in both artists’ lives and art. Smithson was born and raised in northern New Jersey. His seminal photographic essay “The Monuments of Passaic” was published in 1967;4  in the same year, his first Nonsite originated in the state’s Pine Barrens.5  Holt’s family moved to New Jersey when she was a child, and the state’s landscapes were also a generative source for her art, yielding works that included her 16mm film Pine Barrens (1975).6  In 1984 Holt returned to the Meadowlands to begin work on Sky Mound, a commissioned but unrealized “landfill artwork project” to reclaim the postindustrial wasteland as a public space.

Both Holt and Smithson used photography and film to document their projects, and each artist’s engagement with time would seem to find natural expression in time-based media. For Holt, the moving image held particular significance. Recognized primarily for her site-specific sculptures and public artworks in natural environments, she is also acknowledged as one of media art’s pioneering figures. Holt was part of the first generation of artists to use video as a creative and conceptual tool in the late 1960s, and works such as Underscan (1973–74) and Boomerang (1974), the latter made with Richard Serra, are recognized as canonical in video art history.

Holt’s work across all media is preoccupied with perception, process, vision, framing, and the idea of the lens. In 1971, the year that she and Smithson made Swamp, she made her first Locators, which were devices that framed and focused a viewer’s gaze. Holt was also drawn to the actual lenses and framing devices of film and video cameras, and to the perceptual and process-based experiments that characterized much of early film and video art. Holt acquired her 16mm Bolex camera in 1971, and went on to make several important films, including Sun Tunnels (1978), which documented the making of her best-known earthwork in Utah. Smithson, in his 1971 essay “Art Through the Camera’s Eye,”7  professes a more ambivalent relationship to film—“There is something abominable about cameras,” he begins—but speaks to its application in terms that resonate in Swamp: “It appears that abstraction and nature are merging in art, and the synthesizer is the camera.”8

Swamp is one of two early moving image works that Holt and Smithson made in collaboration, each of which takes the form of a performative dialogue or conversational exchange. The 1969 video East Coast/West Coast, which was shot at artist Joan Jonas’s loft, has the informal look of a “home movie.” Holt and Smithson improvise a humorous dialogue based on opposing stereotypes of East Coast and West Coast art of the late 1960s, with Holt assuming the role of a conceptual artist from New York and Smithson playing a laid back Californian.

In East Coast/West Coast Holt and Smithson are performing as fictional characters, whereas Swamp captures the unseen artists as “themselves,” in candid, intimate, and at times subtly comic interactions. Despite the gender dynamics of Swamp’s premise—Smithson delivers instructions to Holt, whose role is to follow—Holt asserts her agency through control of the camera: “Turn to the right,” Smithson directs. Holt turns to the left. “Keep it low…Don’t want too much sky,” he says. She pans up to the sky. As the couple wade deeper into the reeds and lose their orientation, Smithson’s increasingly vague directions are met with Holt’s slightly bemused rejoinders: “Here, head over that way…There seems to be something…You’re heading towards stickers, I think. Over that way.” “Which way?” “Towards that puddle over there.” “I can’t see anything.” “Well, move to your right, to your right. Straight ahead. Watch out for the stickers.”  The couple’s banter injects a disarming note of personal narrative into the conceptual exercise.

The use of “unseen voices” or off-camera dialogue to question perception recurs in Holt’s early moving image works.9  Boomerang is a performative, process-based collaboration, an interactive exchange about the limits of perception through language. As in Swamp, we do not see her collaborator; Serra’s voice is heard off-screen, directing Holt to continue speaking as her voice is played back to her through headphones, causing a destabilizing feedback loop. In the video Zeroing In (1973) we hear—but do not see—Holt and Ted Castle in playful and philosophical exchanges about ways of seeing. And Holt could be describing Swamp when she writes of Pine Barrens, “Though they are never seen…the voices add a psychological dimension to the landscape.”10

Holt’s relationship to film would be inextricably linked to landscape. The terms “film” and “video” are often used interchangeably to denote moving image works, but for Holt, the specificity of the mediums’ processes was significant, as she attests: “I used 16mm film and Super 8 and video early on, and I was conscious of the differences between them. Film led me outside of the studio environment and into the landscape. I follow the camera in a sense out into the landscape…”11  Not only did the filmic medium lead her outdoors, but it also informed the physicality and the collaborative processes of shooting and editing, as she describes of Swamp.

“I’d been going into the reeds and those reeds were going right up against the lens. It took a little getting used to, to be that raw with a 16mm camera. You do not have synced sound. You are taping [sound] while you’re shooting—Bob was holding the tape recorder, which was a large one. Then you are putting the sound with the image and you are actually physically touching the images and splicing them together.”12

Smithson, too, referred to film in relation to landscape, writing of a “closed landscape,” in which the artist’s “point of view is…based on deliberate limitations” and the “open landscape, which embodies multiple views, some of which are contradictory, whose purpose is to reveal a clash of angles and orders within a sense of simultaneity; this shatters any predictable frame of reference.”13  The conceptual elegance of Swamp is such that it operates as both a “closed” and an “open” landscape simultaneously, imposing limitations as it offers multiple views.

Swamp was filmed in March 1971. In April of the same year, Holt made another short film with her Bolex camera, this time in the Florida Keys. The three-minute Road to Nowhere,14 shot in real time, from Holt’s subjective point of view, documents a solitary walk down a sandy path that ends in a brilliant blue sky. Devoid of sound or language, evoking calm instead of chaos, the later film serves as her solo counterpoint to Holt and Smithson’s dialogue of voice and vision in Swamp. Ultimately, Swamp may reveal as much about interaction and communication, both human and technological, as it does about perception. Through language, Smithson negotiates a topography of space and time, which Holt’s camera eye mediates, frames, and focuses. Despite Holt’s protests to the contrary—“I can’t see anything”; “So much of it is out of focus”—Swamp offers us new ways of seeing. Although the artists fail to navigate the physical site of the swamp, their collaborative process yields the expanded vision that is the film Swamp.

Lori Zippay is a New York-based curator, writer, and consultant who has long been active in media art exhibition, distribution, education, and preservation. From the mid-1980s to 2019 she served as Executive Director of Electronic Arts Intermix (EAI), a nonprofit organization that is an international resource for media art, and is now Director Emerita. During her tenure at EAI she developed its archive of over 4,000 media artworks, initiated its pioneering video preservation program, inaugurated and co-authored its online publications and digital resources, and established long-range artistic programs. She has curated numerous media-based exhibitions and video programs, including the survey Circa 1971:Early Video & Film from the EAI Archive for Dia: Beacon in 2012; lectured at institutions and presented at conferences internationally, including at The Museum of Modern Art, New York; Tate Modern, London; and Centre Georges Pompidou, Paris; written extensively on media art, and developed and consulted on numerous curatorial, preservation, and educational projects with emerging and established artists.