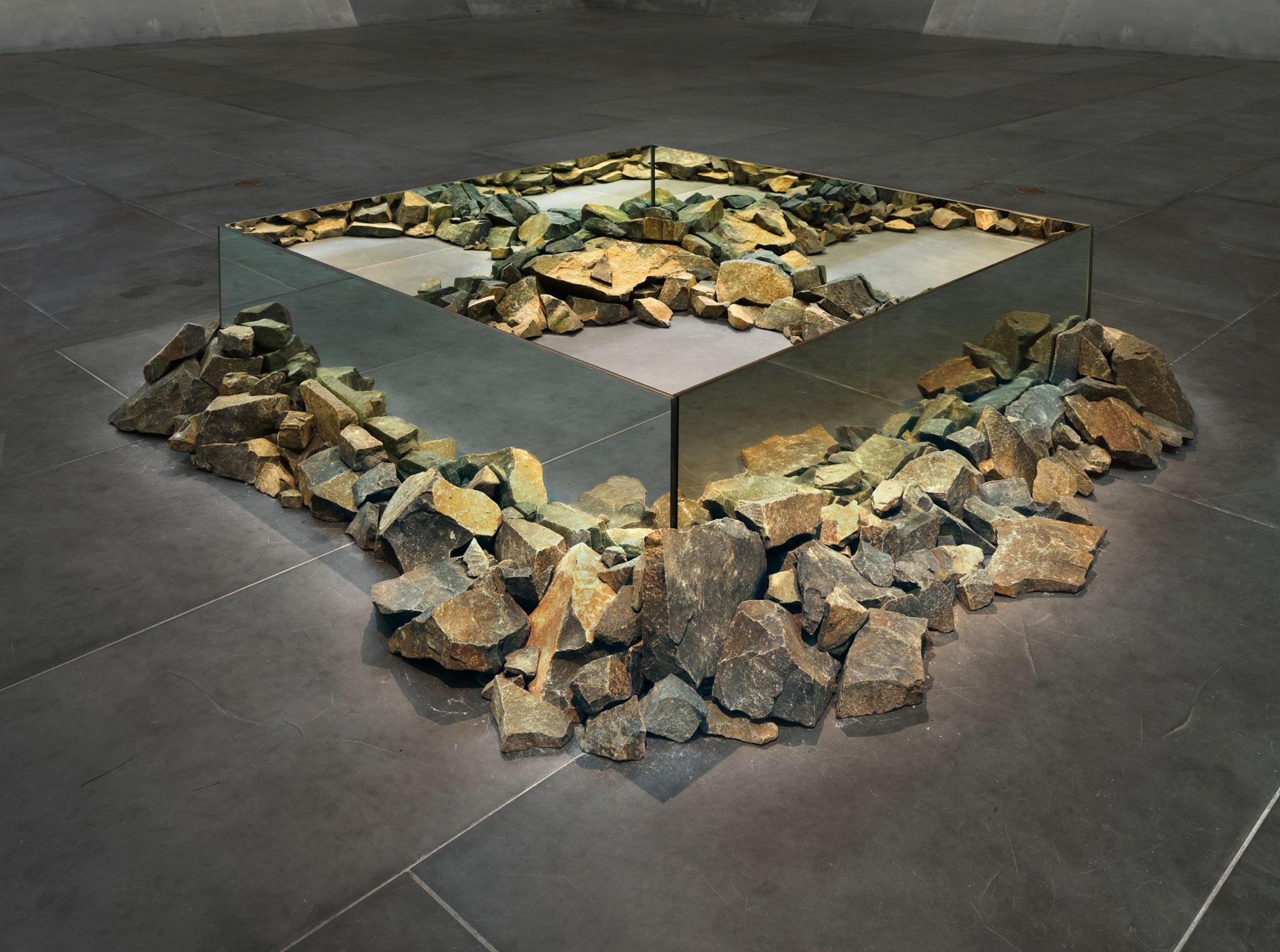 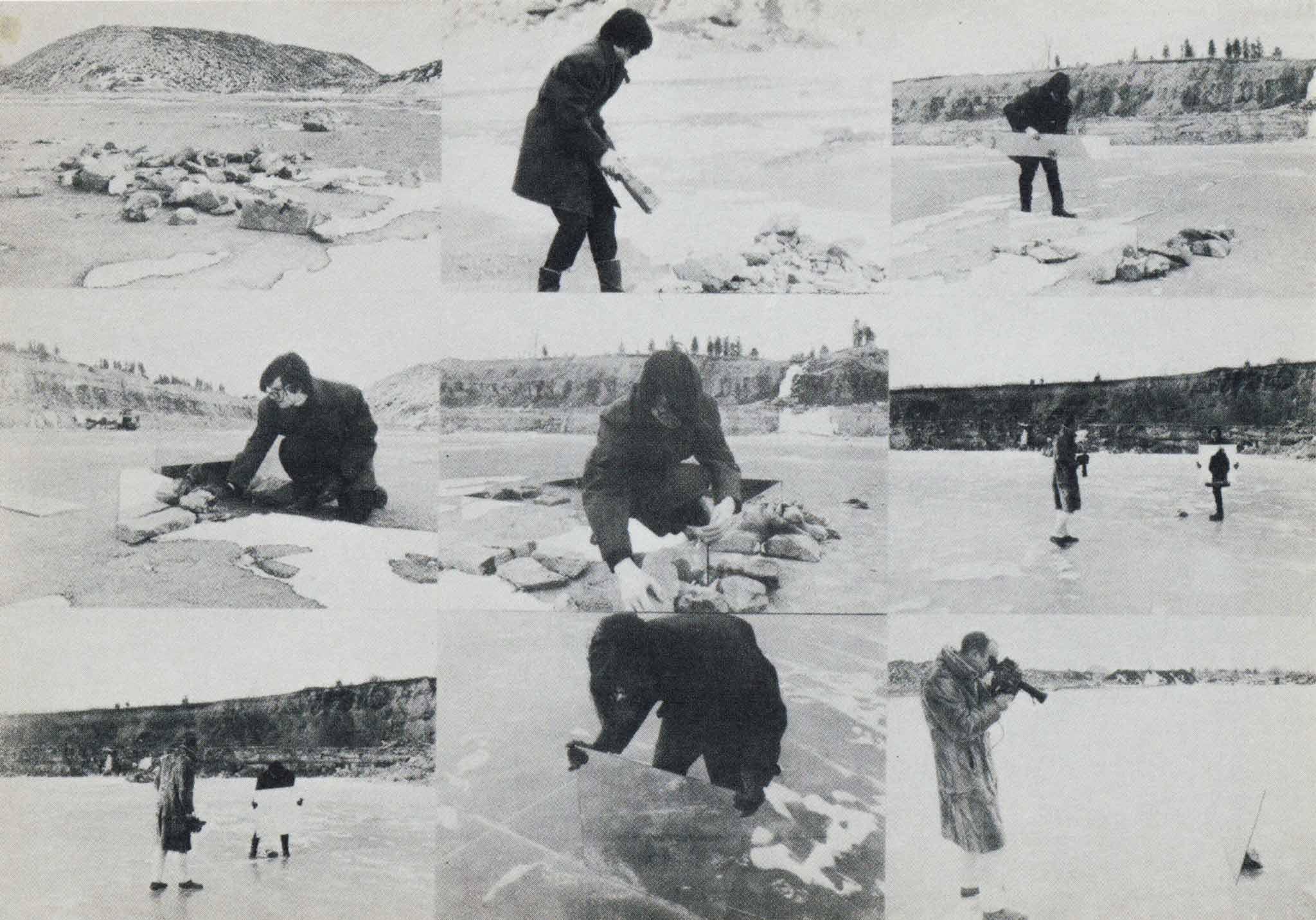 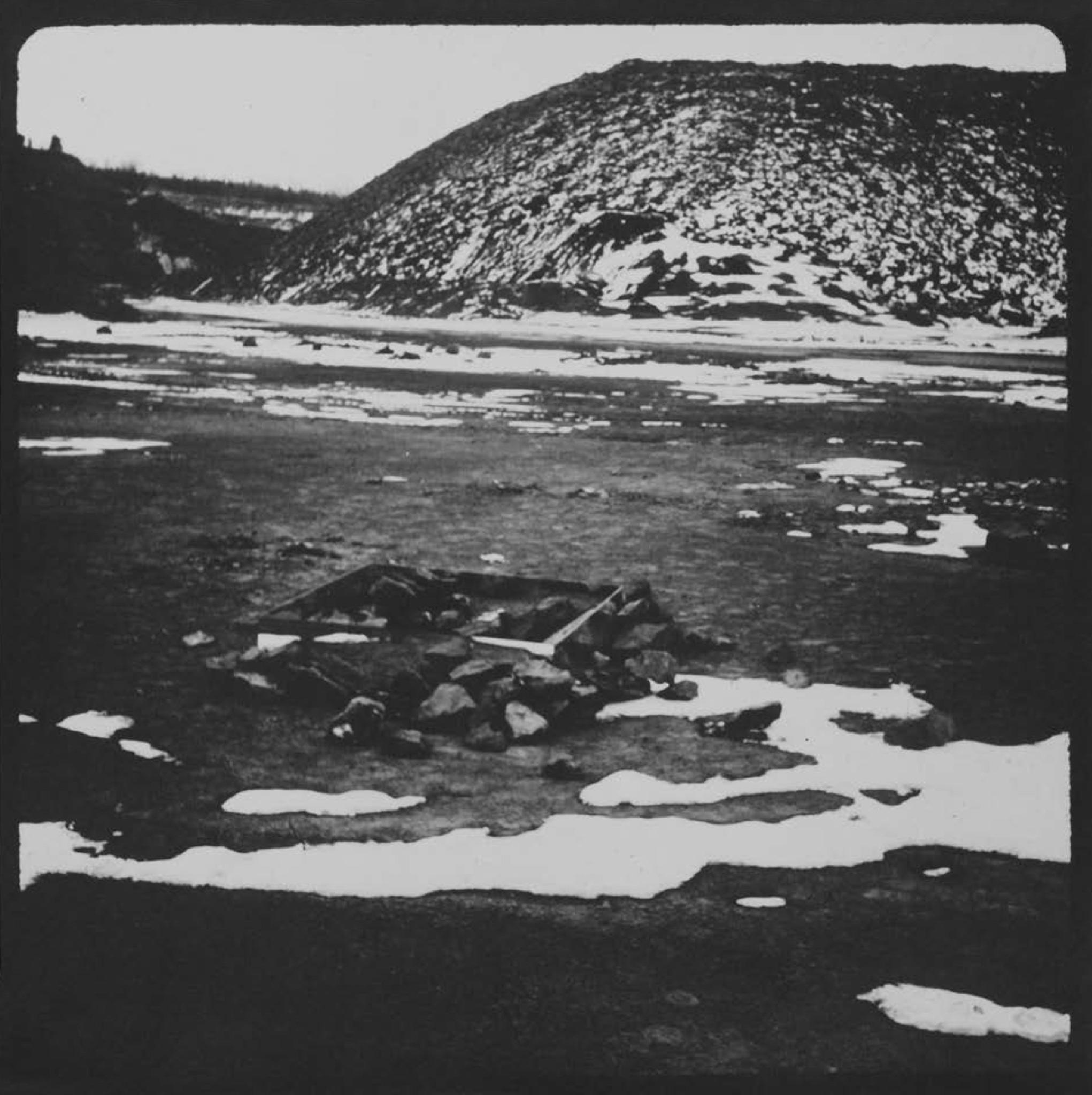 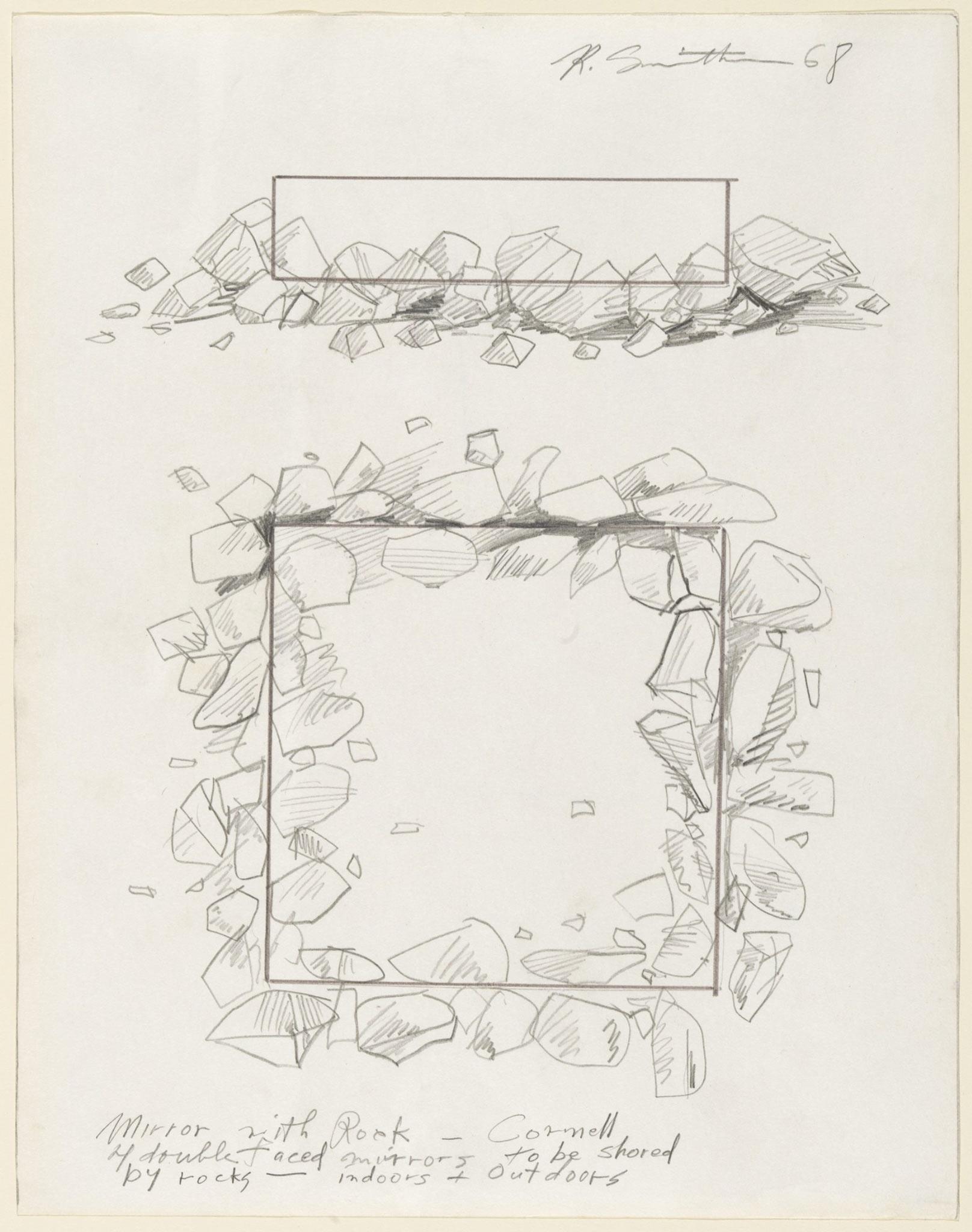 Rocks and Mirror Square II (1971) is constructed from eight, identically sized mirrors, placed back to back against each other to form a mirrored square shored up with basalt rocks. The granular irregularities of the basalt are juxtaposed against the crisp geometry of the structure as a whole. The mirrors are entirely supported by the rocks. In Robert Smithson’s words, the “pressure of the raw material against the mirrored surface is what provides its stability."1  In melding the deep, geological time of the Earth with what Smithson thought of as the timelessness of mirrors, a complex temporal dialectic emerges.

Rocks and Mirror Square II was acquired by the National Gallery of Australia in 1977 from John Weber Gallery, New York, following its inclusion in the 1976 Biennale of Sydney. Initially exhibited by Weber in 1972, its origins lie in a number of works Smithson produced for the Earth Art exhibition at the Andrew Dickson White Museum, Cornell University, in 1969. Smithson’s ambitious contribution to this show involved the transportation of “more than a ton of material” from the Cayuga Salt Mine just north of Ithaca, New York and nearby fossil quarry, for exhibition together with mirrors, photographs and geological maps in the gallery.2

The first iteration of Rocks and Mirror Square II was created on the fossil quarry floor, using raw material gathered on site.3  Smithson collected the basalt for the 1971 variant near Paterson, New Jersey, an area renowned for trap rock quarries, and not far from where he grew up.4  A copy of the geological text Trap Rock Minerals of New Jersey  in Smithson’s personal library notes that much of the extensive basalt crops in this region formed in the Triassic Period from crystallized lava, around 200 to 250 million years ago.5

Looking past the void of floorspace at the centre of Rocks and Mirror Square II, the interior reflects a gridded lattice of rocks that appears to stretch out infinitely in all directions, obliterating the formal limits of the work. This visual effect is critical to understanding Smithson’s intentions for the piece. It connects firstly to Smithson’s theories about the dialectics of site and nonsite, which pivoted around the question of how to relate material collected in the field back to its installation in the gallery. By using mirrors, the basalt is materially and optically linked to its place of origin, as if its containment in the gallery or “nonsite” remains connected to the flows in which it formed (the “site” of collection). Past and present are set in an extended, interlocking relay, visualized in the work as a mise-en-abyme.

Secondly, the appearance of the gridded lattice is indebted to Smithson’s life-long fascination with crystals. The obsession began when his uncle gave him a quartz crystal as a child.6  His father later built him a makeshift natural history museum in the basement of their New Jersey home in which Smithson stored his mineral collection, and as an artist working in the 1960s he went on numerous rock hunting expeditions with his friends.7  In his extensive readings on crystallography, Smithson learned that the molecular growth of crystals accretes in a lattice formation. A crystal develops by repeating the same arrangements of molecules, its structure is based on replication rather than progressive, dynamic evolution. In his nonsites, this crystalline growth pattern was used cartographically to plot the relation of points distant in space, but not time.

As Smithson explained, the “scale of a raw crystal is abstracted to the point where you get a crystal lattice. And this crystal lattice is extended to the latitudes and longitudes of the world, so that you’re drawing lines and grids over the world … all the early works are dealing with that problem.”8  The crystalline matrix produces a cartographic continuum between here and there that abstracts space and time. Instead of seeing time as operating something like a tree or river – organic, branched, forward-moving; the kind of temporality championed by Clement Greenberg’s model of the avant-garde – in the crystal Smithson found a temporal schema based on displacement and dislocation, repetition and extension. The crystal offered new possibilities for mapping the shapes of time.9

The majority of scholarship on Smithson’s use of time focusses heavily on his engagement with entropy. But works such as Rocks and Mirror Square II indicate that he was equally engaged with models of time that were anti-entropic – he wrote of “sinking into timelessness”; of time as stratigraphic, of the vortices of time and temporal hideouts.10  “Time is deranged”, Smithson declared in 1966, “A landslide of diamonds plunges into a polar crevasse of boundless dimension. History no longer exists.”11

In coming to grips with what this kind of suspended time meant for an artist working in New York in the 1960s, Smithson coined the term “time-crystal”: a metaphor for time without end. The time-crystal freezes the flow of time, sublating temporal progression. He used the phrase as a visualization of endlessness and as a rebuttal of temporal evolution.12  Rather than seeing mimimalist forms in relation to the human body, as Robert Morris did, or as specific objects, in line with Donald Judd, Smithson located his new monuments within a zone of radical atemporality, governed by the crystalline logic of mineral time.13  “The future”, he insisted, “criss-crosses the past as an unobtainable present. Time vanishes into perpetual sameness.”14   The crystal lattice underpinning Rocks and Mirror Square II becomes not only a spatial phenomenon, but a temporal one: the deep lithic time of the rocks, millions of years old, are extended outwards in all directions through a vertiginous, mirrored horizon into an indefinite and unlocatable present.

Amelia Barikin is Senior Lecturer in Art History at the University of Queensland. Her research often focuses on the relation between art and time. Publications include Parallel Presents: The Art of Pierre Huyghe (MIT Press, 2012) and Making Worlds: Art and Science Fiction (Surpllus, 2013), edited with Helen Hughes. In 2018, she was curator with Chris McAuliffe of “Robert Smithson: Time Crystals” at the University of Queensland Art Museum and Monash University Museum of Art, the first solo exhibition of Smithson’s work to be presented in Australia.