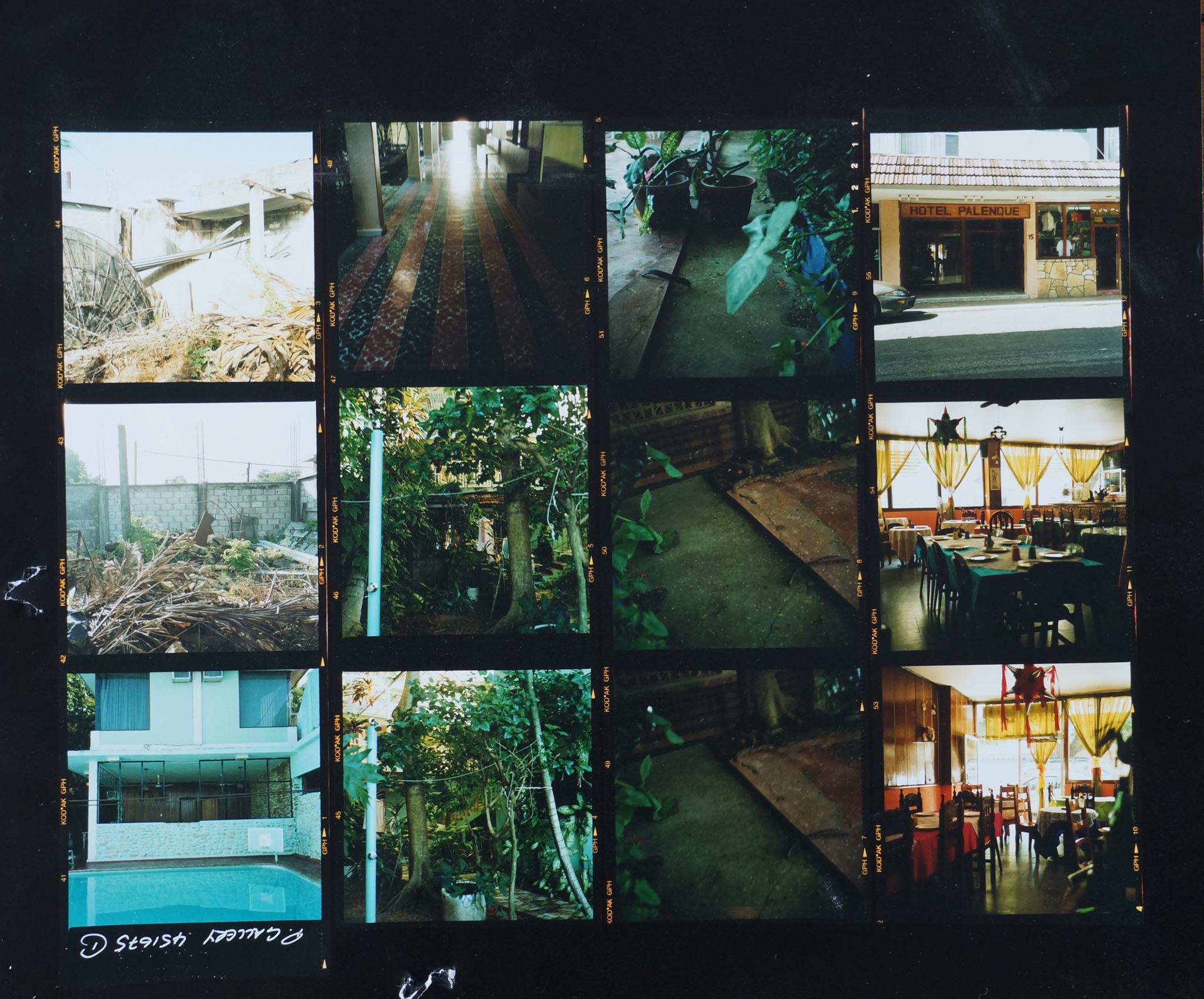 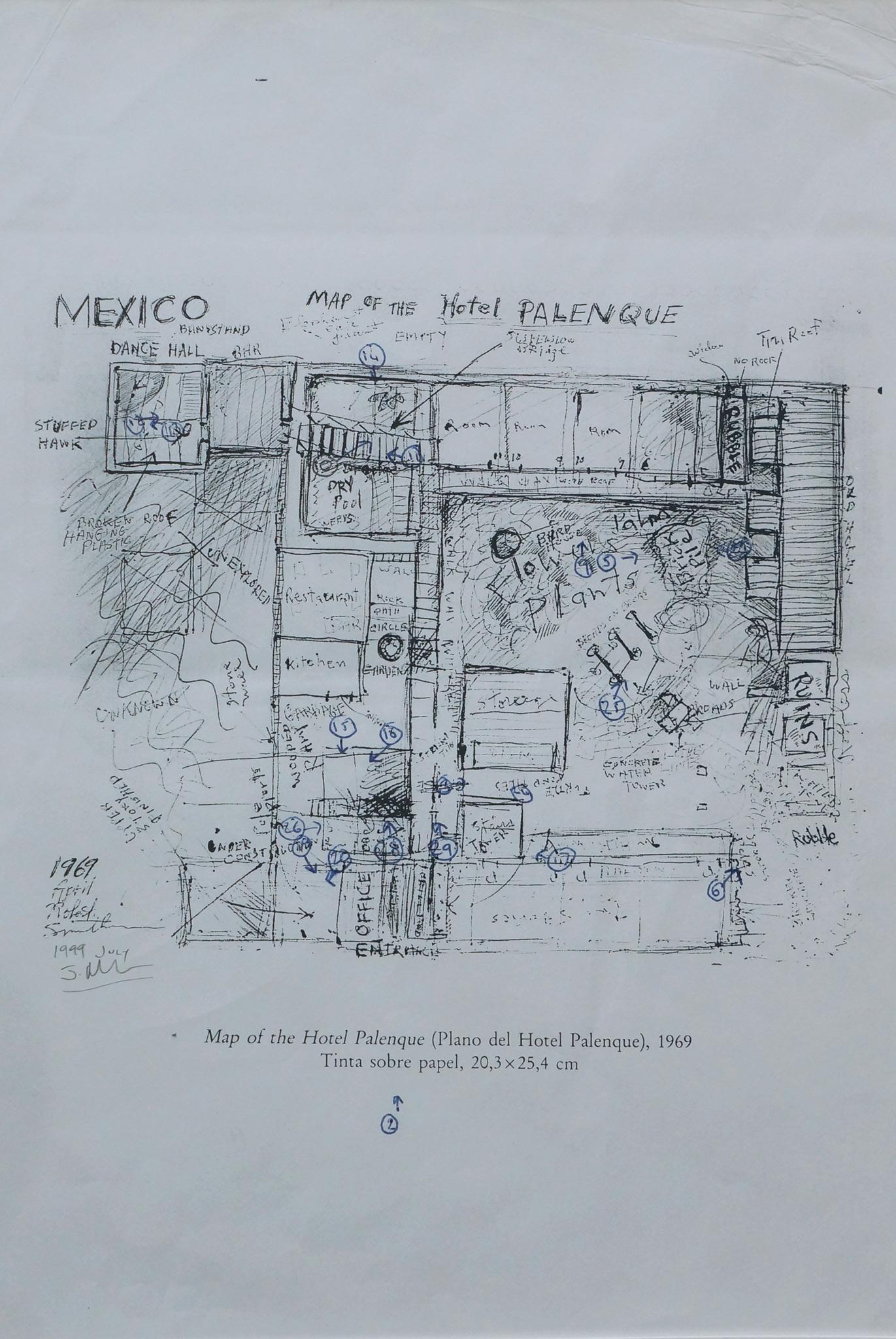 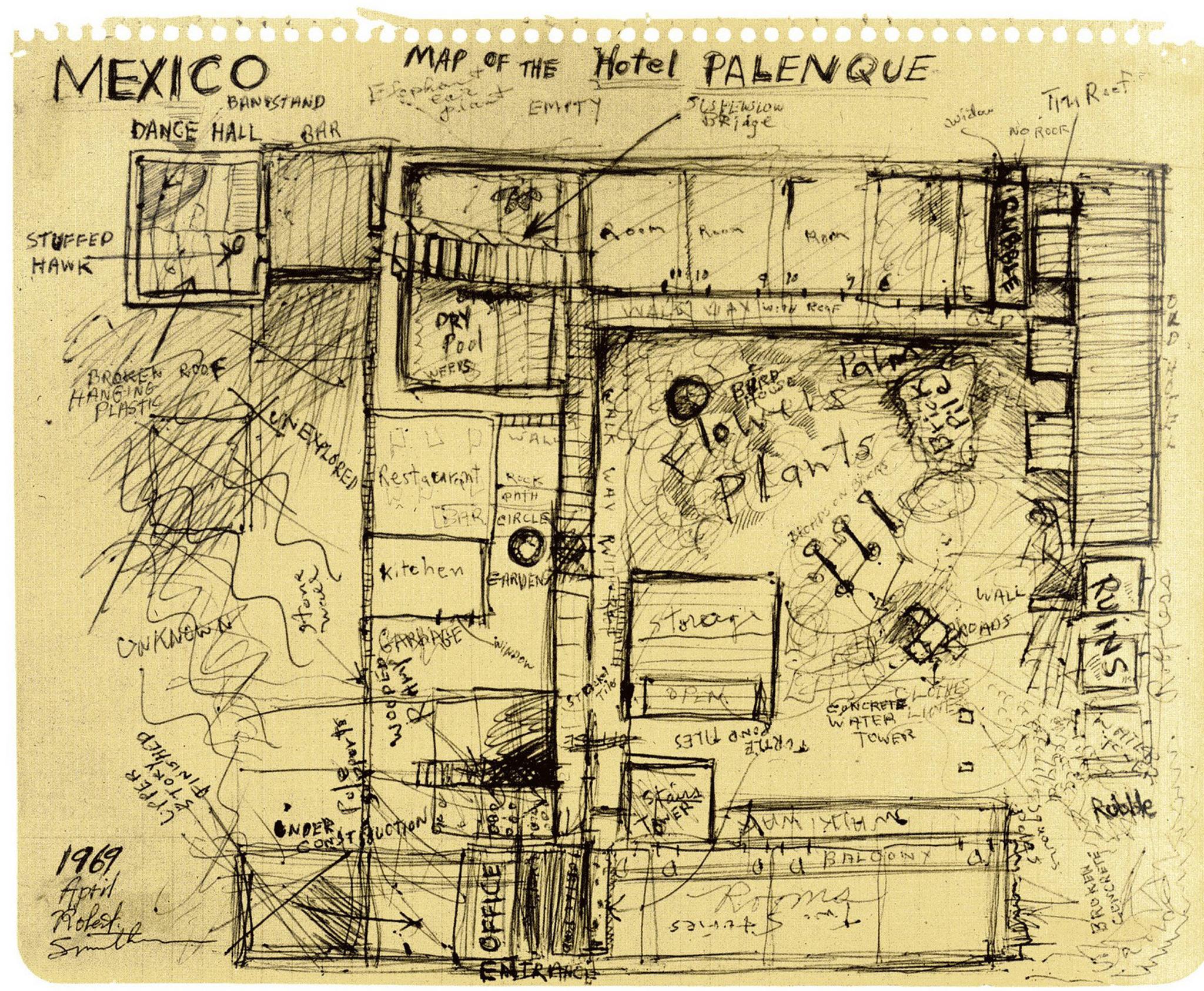 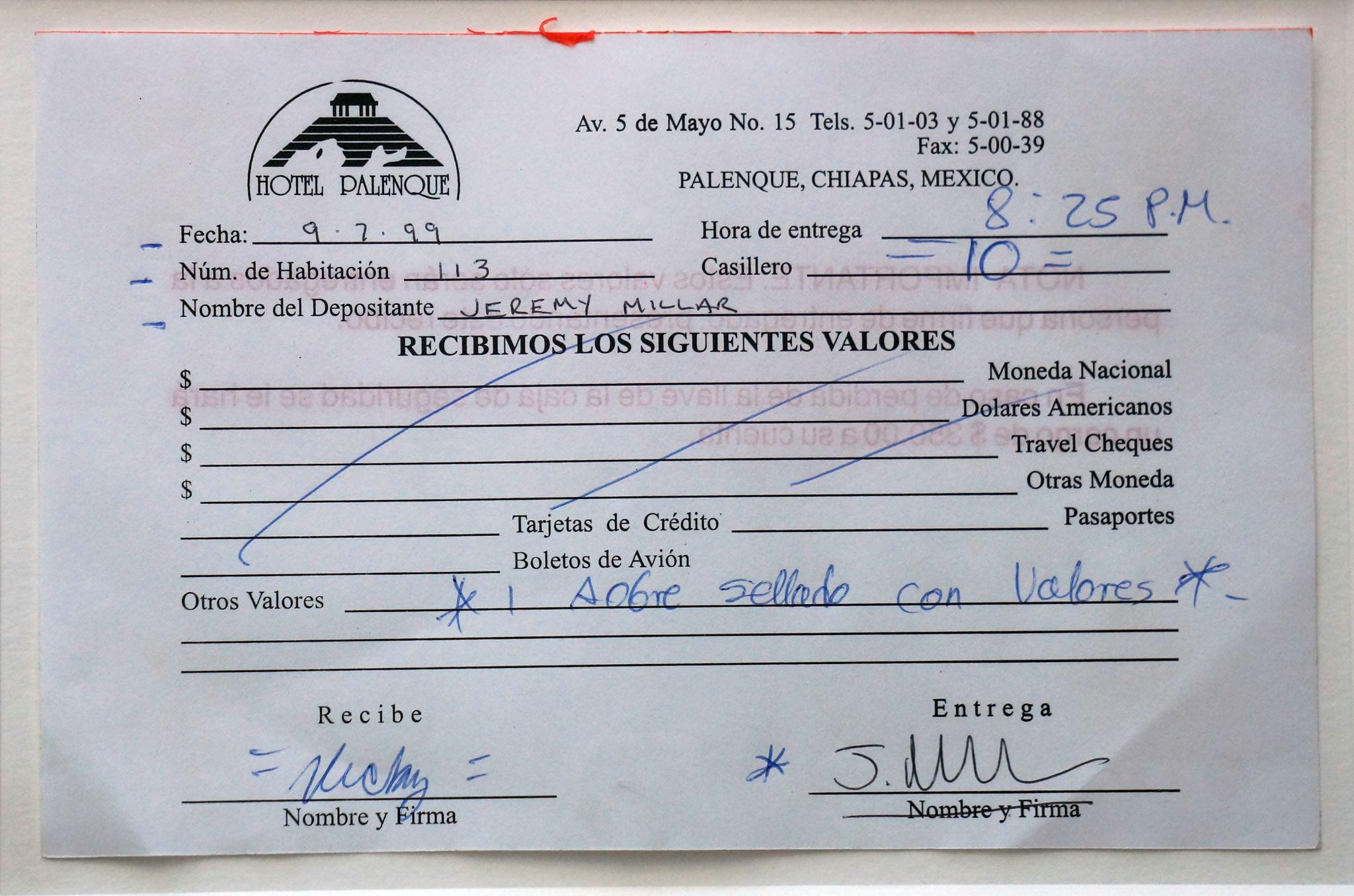 It is perhaps appropriate that the work of Robert Smithson I now think amongst the most exemplary is one that wasn’t intended as a work at all.1  In 1972, Smithson returned to Utah, where he had completed his most well-known work, Spiral Jetty, two years previously, to give a lecture to architecture students at the University of Utah. It’s uncertain how the lecture was advertised, or even introduced—the recording we have omits this, and seems to start in media res—but one can assume that the students were expecting to hear about the famous Mayan ruins in the Mexican city of Palenque, and not the somewhat haphazard architecture of the town’s only hotel (at the time). Smithson had stayed in the hotel three years earlier when he traveled through some of the eastern regions of Mexico with Nancy Holt and his gallerist Virginia Dwan. The trip had obviously been under consideration for some time before that, as in February 1968 Dwan sent a postcard to Holt and Smithson from Mexico in which she notes: “Met some people here who had explored Mayan area, so have some ideas for our trip. — should plan it for no later than April (mid.)”2  This they did almost exactly, leaving New York on April 15, 1969, traveling first to Sanibel Island, Florida, to spend some time with Robert Rauschenberg on Captiva Island, before then flying out of Tampa to Mérida in the Yucatán Peninsula of Mexico.3  From here, their itinerary can be established quite simply by reading the article which Smithson published in Artforum shortly afterwards, “Incidents of Mirror-Travel in the Yucatán,” the title adopted—and adapted—from J.L. Stephens’ 1843 travelogue, Incidents of Travel in Yucatán.4  Smithson does refer to Palenque in this piece—describing the upturning of rocks on the outskirts of the archaeological site5 —but there is no mention, nor photographs, of the hotel which was to become the subject of his Utah lecture.

“Incidents” already possesses a diminished sense of purpose compared to the earlier “The Monuments of Passaic” (1967), also in Artforum, the journey it sets out to document being described as unremarkable from the very start: “Driving away from Mérida down Highway 261 one becomes aware of the indifferent horizon. Quite apathetically it rests on the ground devouring everything that looks like something.”6 This indifference persists in the lecture which followed three years later; indeed, Smithson’s initial comments on the hotel—intertwining, and lacking both a center and any discernible logic—might better describe the lecture than its ostensible subject. Actually, the order of the slides does follow a basic logic, starting with the hotel’s exterior before moving through the site, yet Smithson is clearly not reading from notes, and his comments do not suggest a great deal of preparation.7 Instead the tone—“more stoned than stentorian” in Neville Wakefield’s evocative phrase—is one of sun-stilled languor: within the first minute Smithson notes that “you can see that nice stained wooded facade there and just meditate on that all afternoon,” and moments later, referring to some broken concrete, that he “spent many happy moments in the Hotel Palenque meditating on this particular section.”8  (The lecture, and the “Incidents” piece which preceded it, are perhaps the two works of Smithson’s which possess a quality not uncommon in much art of the period, that which we might call “attentive indifference.”) Is time passing, or is Smithson caught in a “de-differentiated” period at once ancient and modern? I don’t think that the overwhelming sense of stasis in the lecture comes from nothing happening, however, but, as with the spiral form with which he was so fascinated, and used so often, it is the stasis of counter-balanced movement.9  “It's not often that you see buildings being both ripped down and built up at the same time,” Smithson remarks, but it is this entropic and negentropic process which is being maintained and with which he is so captivated, rather than the building itself.10

In 1999 I travelled to the Yucatán Peninsula—via Texas, not Florida—with my wife (and no gallerist) on our honeymoon, and for three weeks stayed in various places in Quintana Roo, Chiapas, and Yucatán, including—inevitably—some nights in the Hotel Palenque.11  Walking east up what was then Av. 5 de Mayo, I recognized the building straight away from the first slide of Smithson’s lecture, though it was by now larger, and the road no longer a dusty track. I had memorized all of Smithson’s images, of course, although to be safe I had traveled with photocopies of the Parkett insert, and of Smithson’s drawn map of the hotel, too, and it was with these in hand that I walked around the hotel and its grounds, locating where, exactly, Smithson had taken his photographs, and marking the positions on the map. (When we were first taken to our room I was delighted to realize that it was one that could be seen in one of Smithson’s photographs: on the first floor, at the top of the ramp, in the slide with the drooping palm.)

What was clear then was that the hotel had continued to be subject to the same forces of construction and deconstruction—“de-architecturalization”—that Smithson had seen, photographed, and discussed all those years earlier.12  Some of it had remained relatively unchanged—the distinctive red-and-black floor tiles, for example, “much more interesting than most of the painting being done in New York right now,” as Smithson had noted—although more of it had been built up and repaired, or had disintegrated further.13  The empty swimming pool, described by Smithson as a “pen for iguanas” which “calls up all the fears and dread of the ancient Mayan Aztec world, human sacrifice and mass slaughter” was now filled with cooling water rather than imagined still-warm blood, although the dance-hall—empty and abandoned in 1969—had fallen into even greater disrepair, its beams gone and the floor and “curving curve” of the small concrete stage hidden beneath piles of accumulated debris.14

“The camera is a portable tomb, you must remember that”, Tezcatlipoca said to Smithson on the outskirts of Uxmal, and we had brought our own, my wife her Rolleiflex and I something more tourist-like.15  With both I photographed the hotel from the exact points where Smithson had stood thirty years previously, the square format of the Rollei mimicking that of Smithson’s 126 camera. This 120 roll film I kept; the 35mm film from my own camera I took to the reception and put in one of the hotel’s safety deposit boxes. When we checked out the next day I took the key and receipt with me, and left the film in the box: the hotel had become the tomb into which its image had been interred.16

Meyer, James, The Art of Return, The University of Chicago Press: Chicago, 2019

Jeremy Millar is an artist and senior tutor at the Royal College of Art, London, where he is currently Head of the MA Writing program. His recent exhibitions include: Machines à penser, Fondazione Prada, Venice, 2018; Metaphoria III, Le centquatre-Paris, 2018; and The other dark: Tacita Dean, Jeremy Millar, and Nashashibi/Skaer, Sirius Art Centre, Cobh, Ireland, 2017. His collaboration with Siobhan Davies Dance, material / rearranged / to / be, premiered at Barbican Curve, London in 2017 before touring to Tramway, Glasgow; Whitworth Art Gallery, Manchester; and Bluecoat, Liverpool. He has curated numerous exhibitions including Speed (Whitechapel Art Gallery, London, 1998) which included work by Robert Smithson, and Overlay (White Rainbow, London, 2016) which included work by Nancy Holt; he also conceived John Cage: Every Day is a Good Day (Hayward Touring, 2010–11), the largest exhibition of Cage's visual art to date. In 2018 he gave the keynote lecture, "Smithson and Ballard", at the symposium to complement the exhibition Robert Smithson: A Crystalline World at MUMA, Melbourne. He is currently developing a series of works related to the poems of Emily Dickinson, including paintings, collages, and a song cycle.