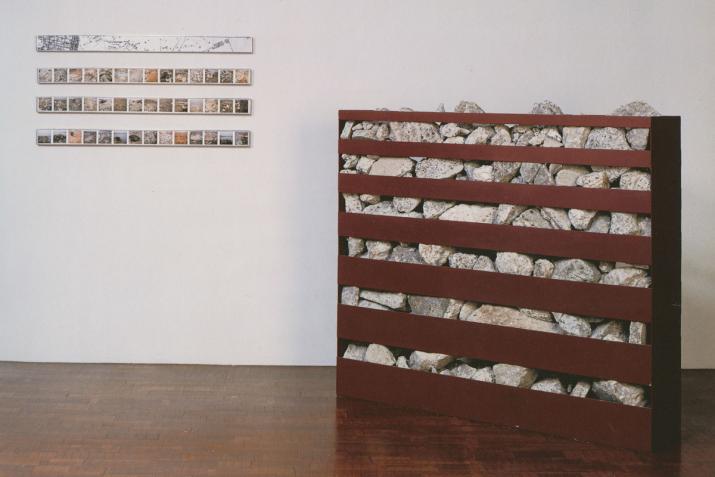 A Provisional Theory of Nonsites

By drawing a diagram, a ground plan of a house, a street plan to the location of a site, or a topographic map, one draws a “logical two dimensional picture.” A “logical picture” differs from a natural or realistic picture in that it rarely looks like the thing it stands for. It is a two dimensional analogy or metaphor—A is Z.

The Nonsite (an indoor earthwork) is a three dimensional logical picture that is abstract, yet it represents an actual site in N.J. (The Pine Barrens Plains). It is by this three dimensional metaphor that one site can represent another site which does not resemble it—thus The Nonsite. To understand this language of sites is to appreciate the metaphor between the syntactical construct and the complex of ideas, letting the former function as a three dimensional picture which doesn't look like a picture. “Expressive art” avoids the problem of logic; therefore it is not truly abstract. A logical intuition can develop in an entirely “new sense of metaphor” free of natural or realistic expressive content. Between the actual site in the Pine Barrens and The Nonsite itself exists a space of metaphoric significance. It could be that “travel” in this space is a vast metaphor. Everything between the two sites could become physical metaphorical material devoid of natural meanings and realistic assumptions. Let us say that one goes on a fictitious trip if one decides to go to the site of the Nonsite. The “trip” becomes invented, devised, artificial; therefore, one might call it a non- trip to a site from a Nonsite. Once one arrives at the “airfield,” one discovers that it is man-made in the shape of a hexagon, and that I mapped this site in terms of esthetic boundaries rather than political or economic boundaries (31 sub-divisions—see map).

This little theory is tentative and could be abandoned at any time. Theories like things are also abandoned. That theories are eternal is doubtful. Vanished theories compose the strata of many forgotten books.