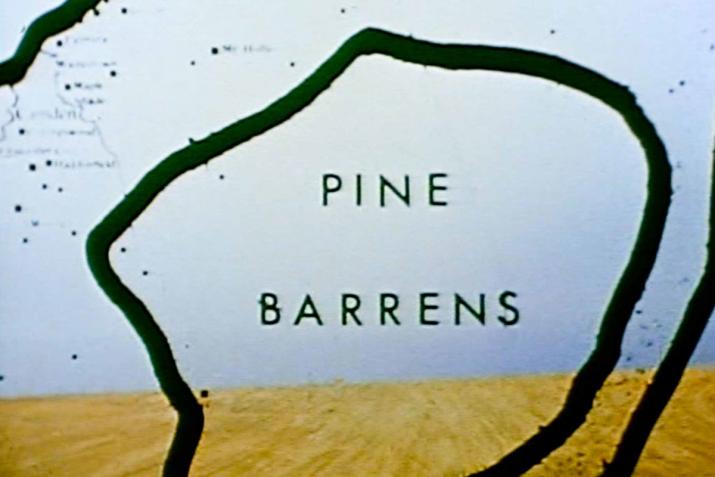 In 1975, Nancy Holt created Pine Barrens, an experimental film shot on a tract of land in the dead center of New Jersey known mostly for its cranberry bogs, sand pits, and stumpy pine trees. Pine Barrens is a brilliant rumination on one of modernity’s central dialectical knots: the relationship between center and margin. That it does so not from a metropolis but from a periphery lodged within a periphery makes it prescient indeed. As Holt well recognized, no better place to explore this particular antinomy exists than the Pine Barrens.

Born in Massachusetts in 1938 but raised in New Jersey, Holt visited the Pine Barrens with some regularity growing up. She began returning to the state in the mid-1960s, this time as an artist, often with her husband, Robert Smithson, and a variety of friends in tow. Along with millions of others, Holt and Smithson took advantage of the country’s relatively new interstate highway system, especially the New Jersey Turnpike, construction of which took place between 1951 and 1952. The first of their excursions occurred in 1966, and their trips usually entailed either making, or sourcing materials for future works of art. Besides Cedar Grove and Great Notch Quarry, Holt and Smithson travelled frequently to the Pine Barrens. So strong was their attachment to the area that they considered buying land there in the late 1960s. Their trips to New Jersey slowed after 1969, but they returned, together, one last time in 1971 to film Swamp. That would prove to be Holt’s next to last New Jersey-based work until 1975, when she shot Pine Barrens.1  In many ways, Pine Barrens is Holt’s swan song for the Garden State, the culmination of a nearly forty-year engagement with New Jersey generally and the Pine Barrens specifically.2

A masterful synthesis of form and subject matter, Pine Barrens begins abruptly, with the camera pointed through the windshield of a moving car, plunging the viewer into the film and, by extension, its titular subject. A golden-brown desert capped by a cloudless blue sky fills the screen. The plucking of a banjo, part of an extended sound collage, is heard in the background. Soon the outline of a map of New Jersey appears. As the graphic expands, two words fill the void at its center: Pine Barrens. The band responsible for the music, Bill Patton’s Pine Barrens Trio, is soon revealed, likewise the place where the recording was made, Green Bank Inn, Green Bank, N.J. Overall, Holt’s fifty-two second introduction serves to announce the film’s primary protagonists—car, camera, Pinelands—as well as its overarching narrative: the contradiction between delocation and location, site-indeterminacy and site-specificity.

Twelve vignettes follow the opening sequence. Shot at various locations, each vignette adopts a slightly different framing device, all designed to destabilize the visual field and disorient the audience. In one instance, Holt meanders up a deer trail with the camera pointed straight ahead. Sunlight bears down on the lens, producing bursts of glare that “bleach” the scene.3  Later, we find the artist and her camera inside a forest so densely packed with trees that it is impossible to distinguish left from right or near from far. In a subsequent vignette, Holt constricts the field of view to a circle.4 While her assistant drives, she points the camera out the window and down towards a stream where the sky and trees are reflected in the water. Here space has been flipped: what is up is down.

The following sequence adapts the serial procedures of conceptual art. In this case, Holt pairs two two-second shots of the same row of pines, forty-eight pairs total. The shots are nearly, but not exactly, identical: after two seconds, Holt turned off the camera, moved a few feet in one direction, and then turned the camera back on for two more seconds. The viewer knows only what they see: a flash lasting as long as a blink, and trees that were not where they were before. The film’s last sequence also exploits the gap between vision and knowledge. It begins with sand, which fills the screen. With no horizon line, the viewer struggles to get their bearings. The confusion worsens once Holt and, by extension the camera, start to move. With every step Holt displaces more of the ground beneath her feet, but thanks to the angle of the camera (straight down) and the orientation of the screen (vertical), the particles of sand appear to be falling upwards, in defiance of both gravity and the artist’s own trajectory downhill. Besides perceptual and conceptual conundrums like this one, what links the film’s disparate vignettes is the camera, which is always, consistently, in motion. We see the Pinelands as a hiker or a driver would, as a blur of constantly changing scenery that is always in the process of being dislocated. The subject of Holt’s film, and likewise the site where it was made, is never exactly where it should be. The introduction proves to have been a red herring, situating the film somewhere concrete, the Pinelands, only to uproot both its site and its viewer immediately thereafter.

The eye is not the only organ simultaneously solicited and misled by Pine Barrens. Each of the film’s vignettes is paired with ambient sound as well as excerpts from seven hours of interviews conducted with the residents of the Pine Barrens. Holt spoke to local people ranging from woodsmen, bartenders, and hunters, to the owners of cranberry bogs, sand quarries, and saw mills. They, not Holt, are the experts—the tour guides, if you will—whose voices of authority narrate the viewer’s road trip through New Jersey. Their commentary, however, never quite matches the footage, shifting between coincidence and non-coincidence. “You can get lost,” one resident proclaims of the Pine Barrens. The same is true of Holt’s film.

In a 1975 essay for Avalanche, Holt described the Pine Barrens as a “forgotten land” and a “wilderness.”5 “Wilderness” merely approximates the truth, however. Home to farmers, industries, real estate agents, developers, and journalists, among them John McPhee, whose two part essay on the region appeared in the New Yorker in 1967,6 the Pine Barrens was not nearly as overlooked or desolate as Holt’s terminology suggests. Ultimately, however, fiction mattered more to Holt than truth,  and in Pine Barrens, the artist found or, more precisely, made what she sought: an elsewhere, a place defined by both its distance and its difference from modern, cosmopolitan centers like Manhattan. Pine Barrens thus serves as an object lesson in postwar artists’ investment in the myth of the periphery, where new ways of seeing, being, and making might be engineered, even if it was just on a stage of their own invention.7

Kelly Baum is the Cynthia Hazen Polsky and Leon Polsky Curator of Contemporary Art at The Metropolitan Museum of Art. She has held curatorial positions at the Princeton University Art Museum, the Blanton Museum of Art at University of Texas at Austin, and the Museum of Fine Arts, Houston. She has organized dozens of exhibitions on twentieth- and twenty-first-century art, including New Jersey as Non-Site (2013), which featured the work of both Nancy Holt and Robert Smithson, among others. Her most recent project, Alice Neel: People Come First, a retrospective co-curated with Randy Griffey, opens in spring 2021. She received her PhD from the University of Delaware in 2005 and was a 2018 fellow in the Center for Curatorial Leadership. 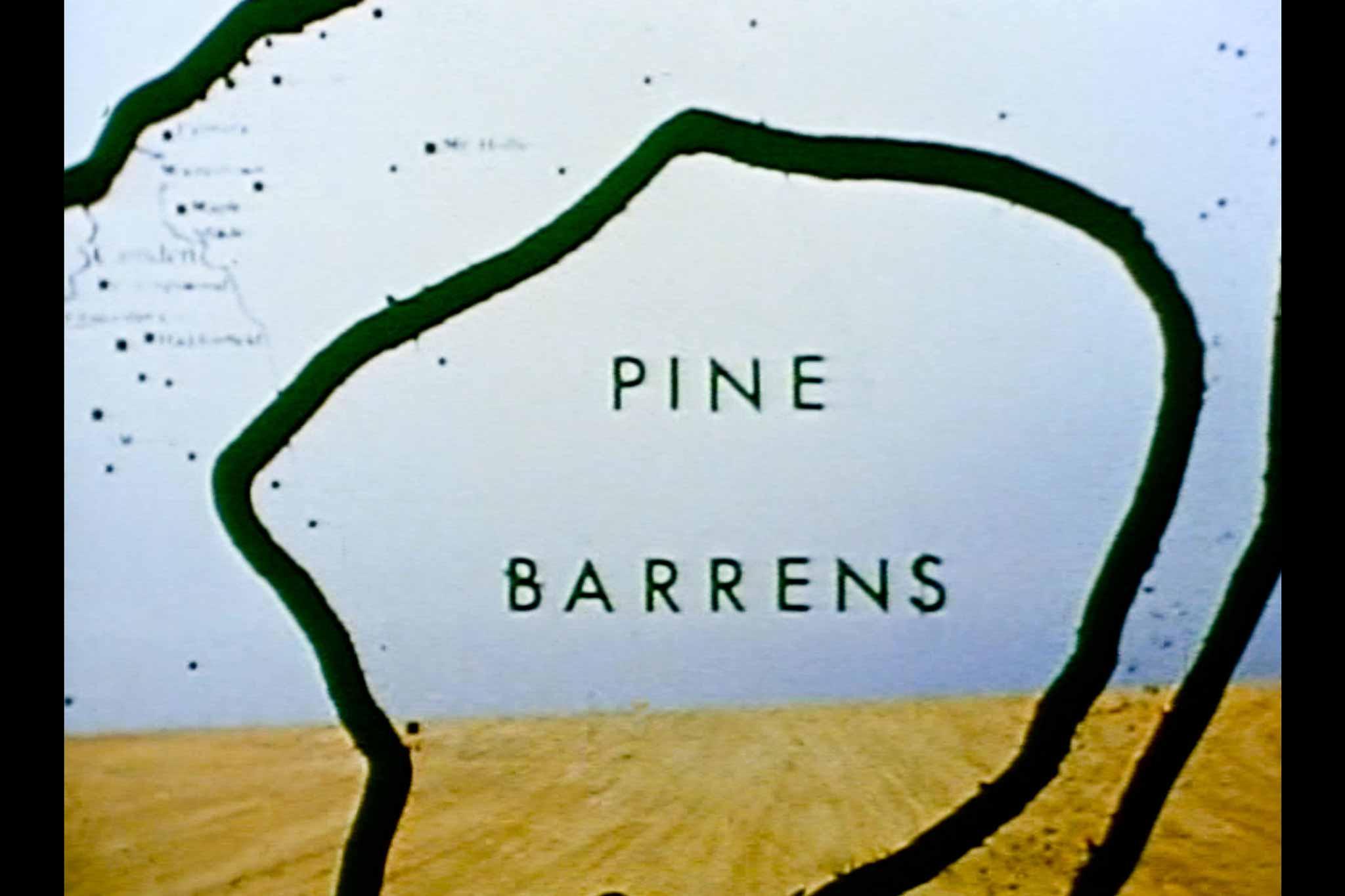 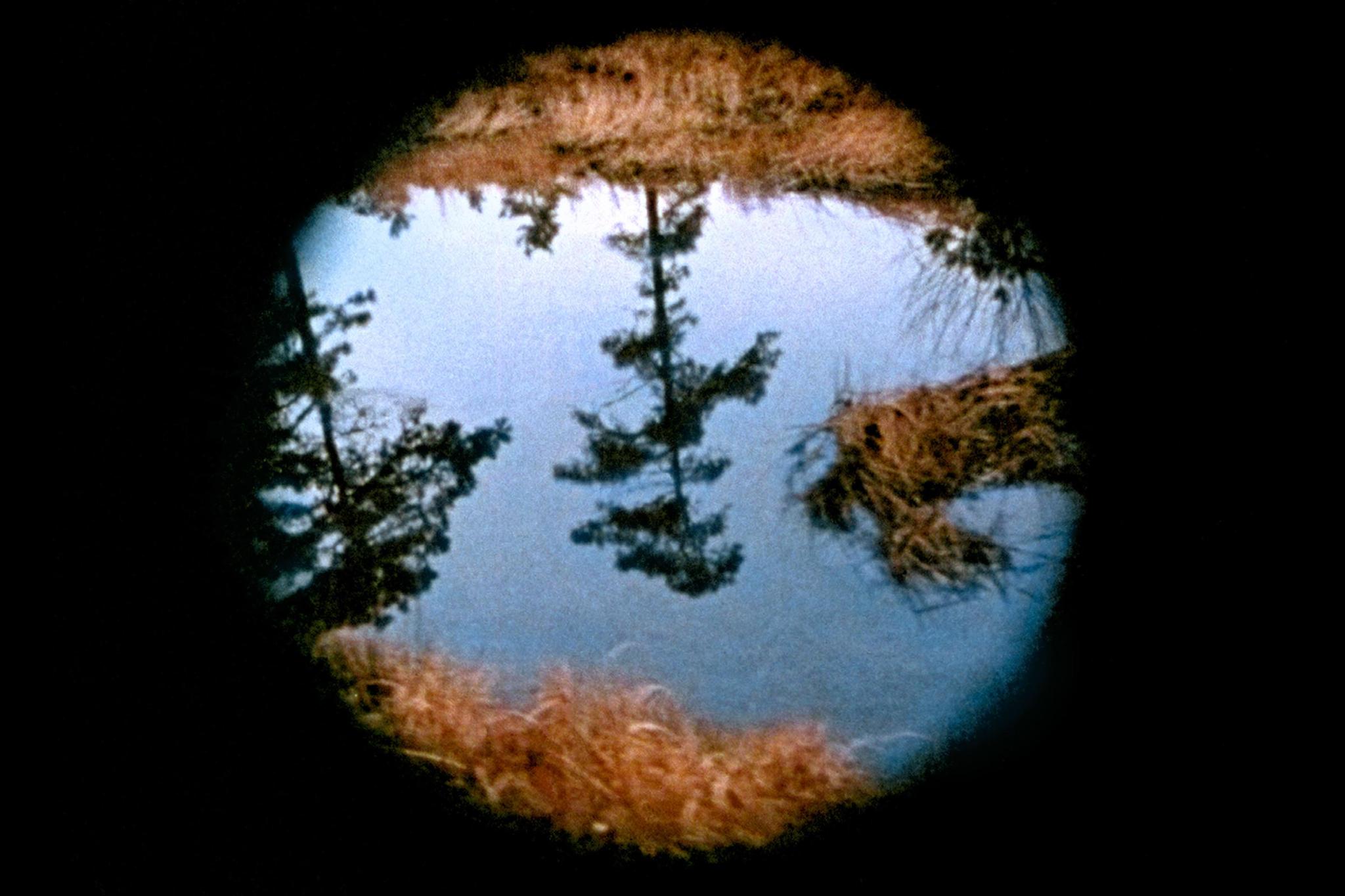 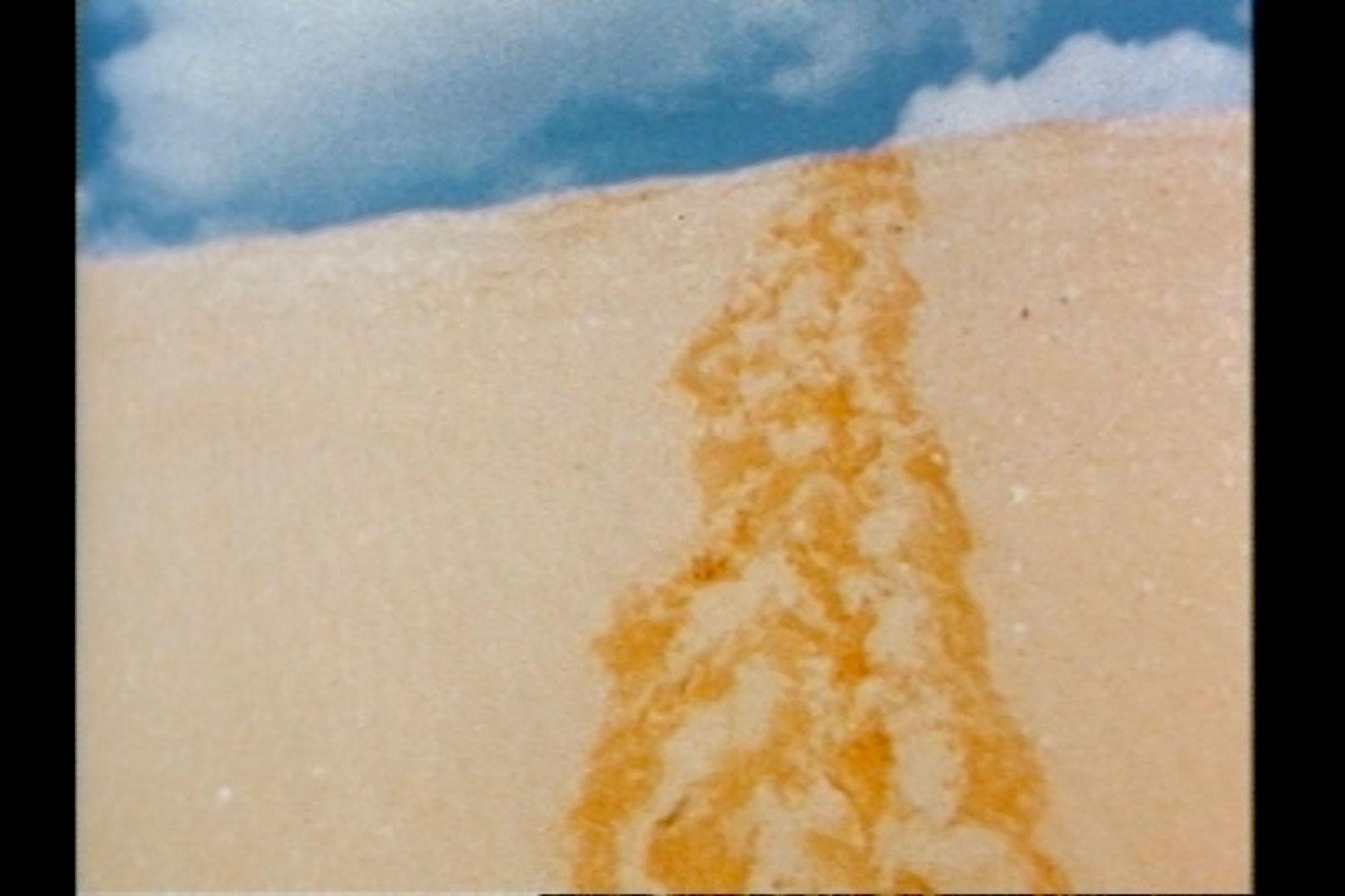 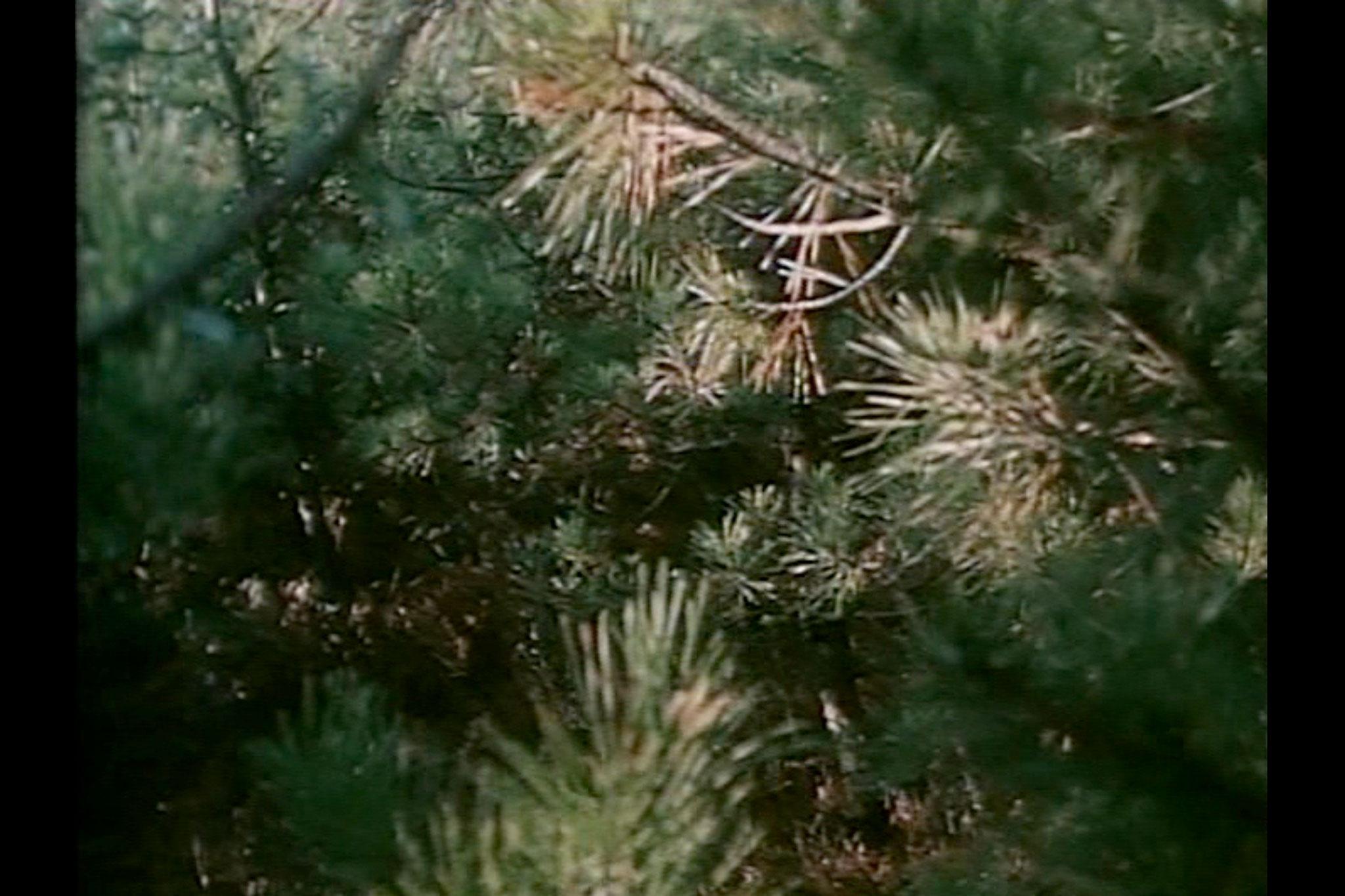