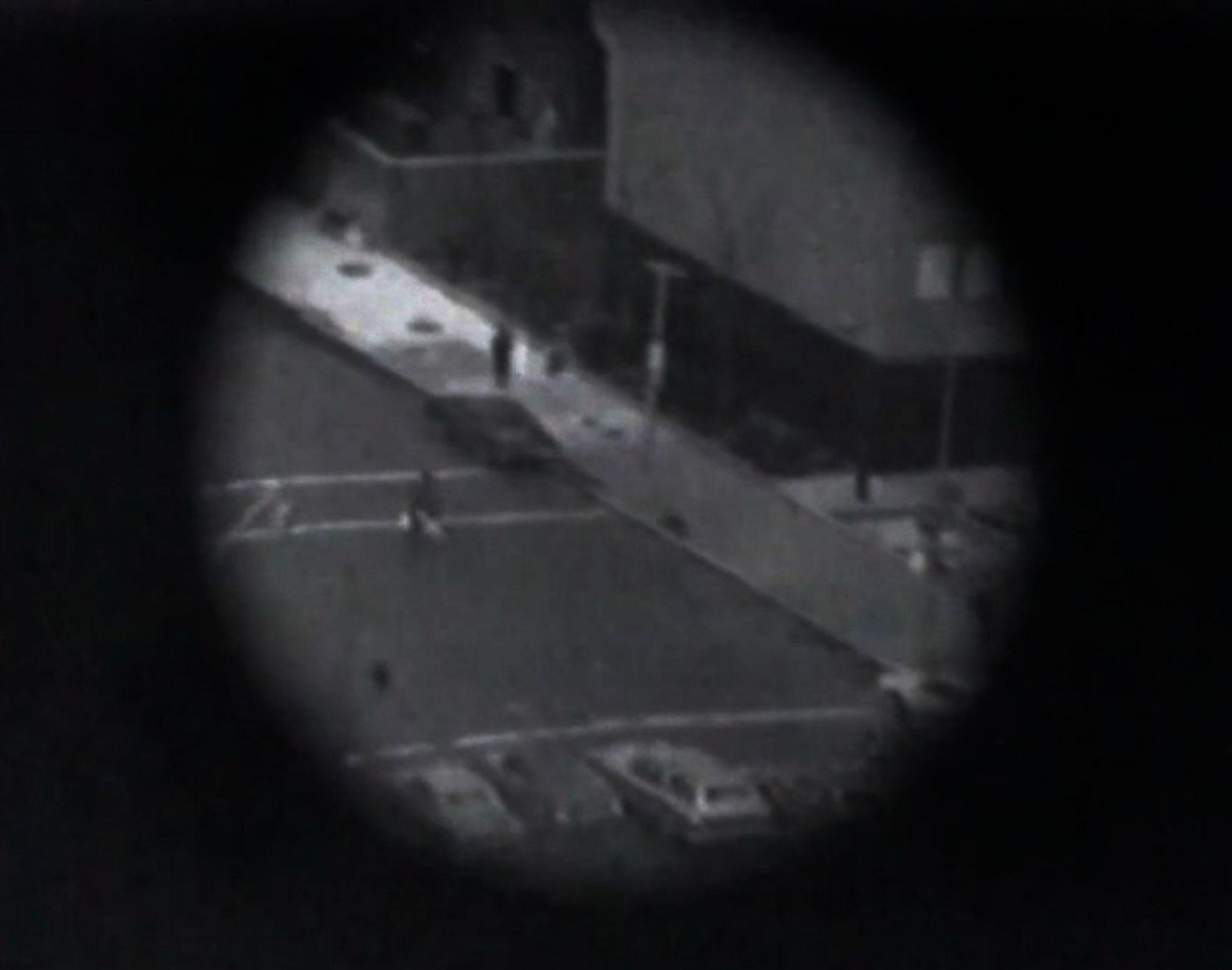 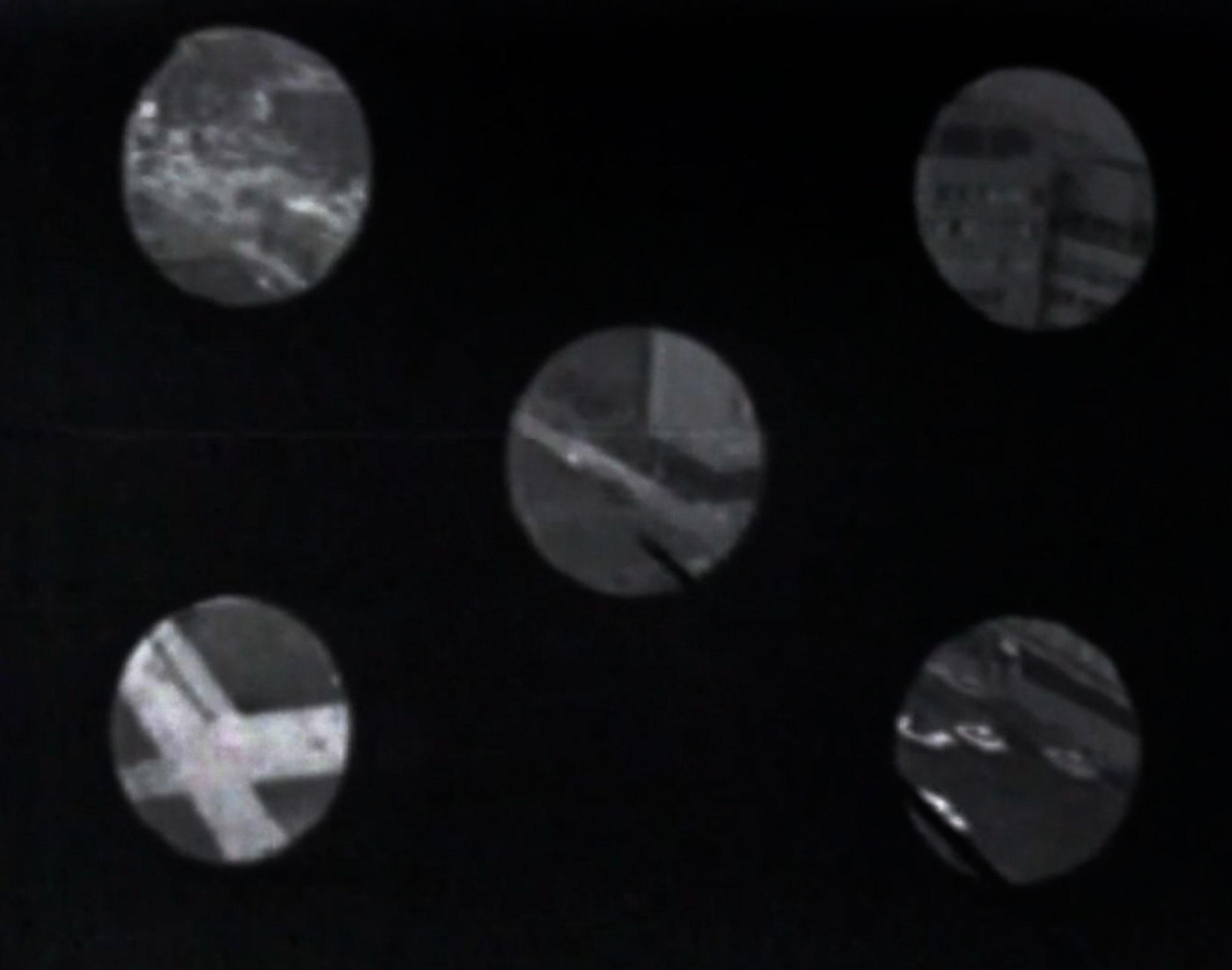 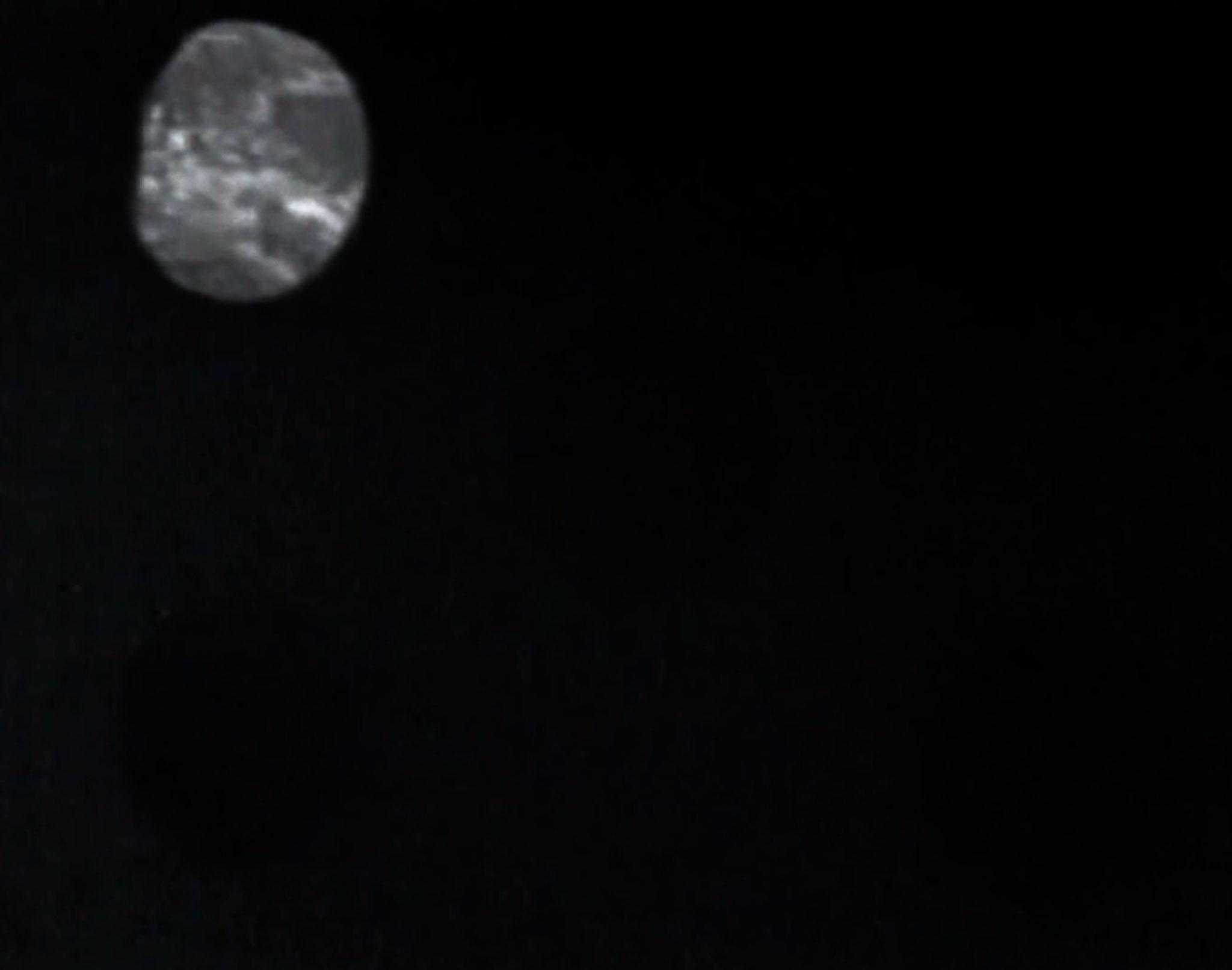 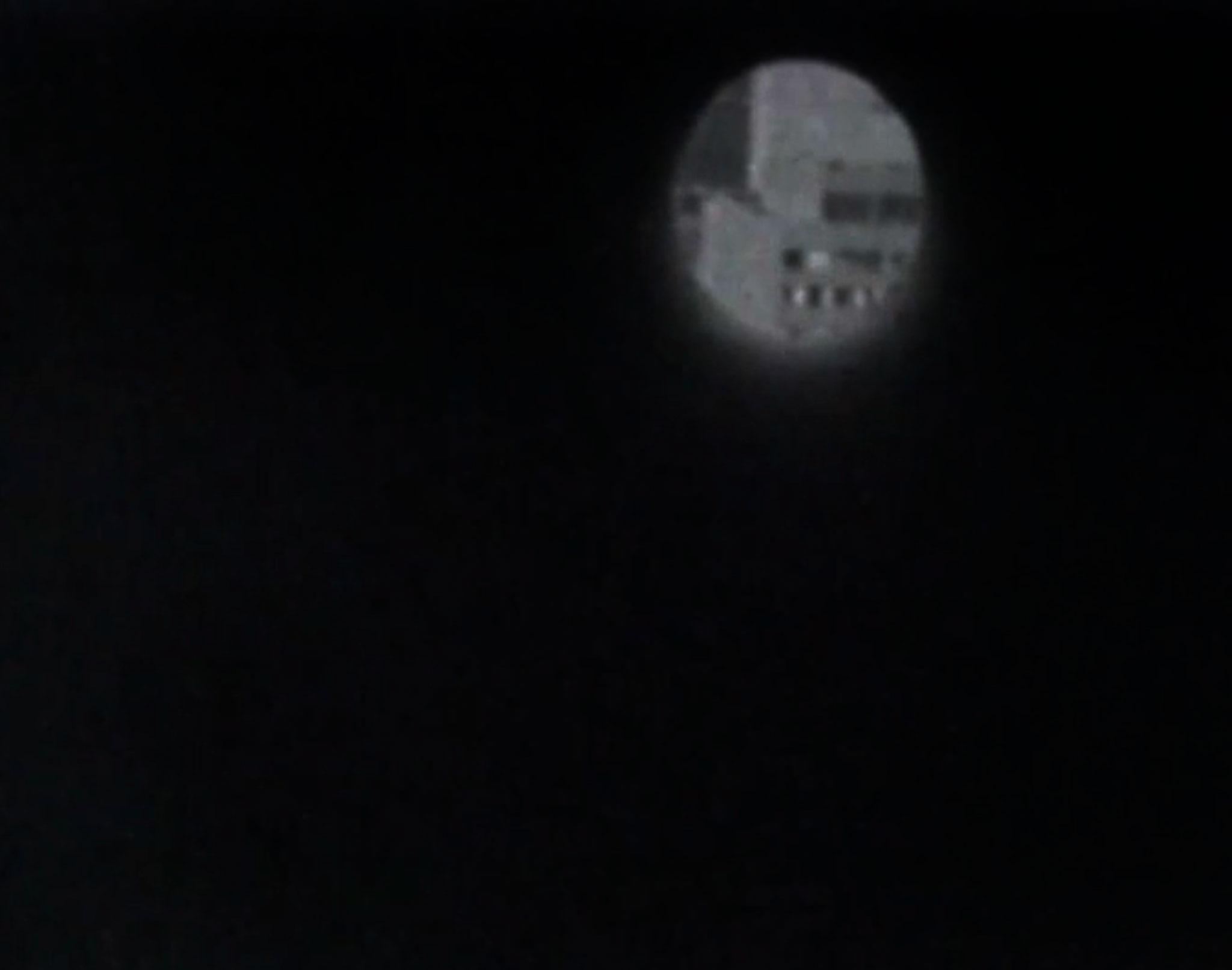 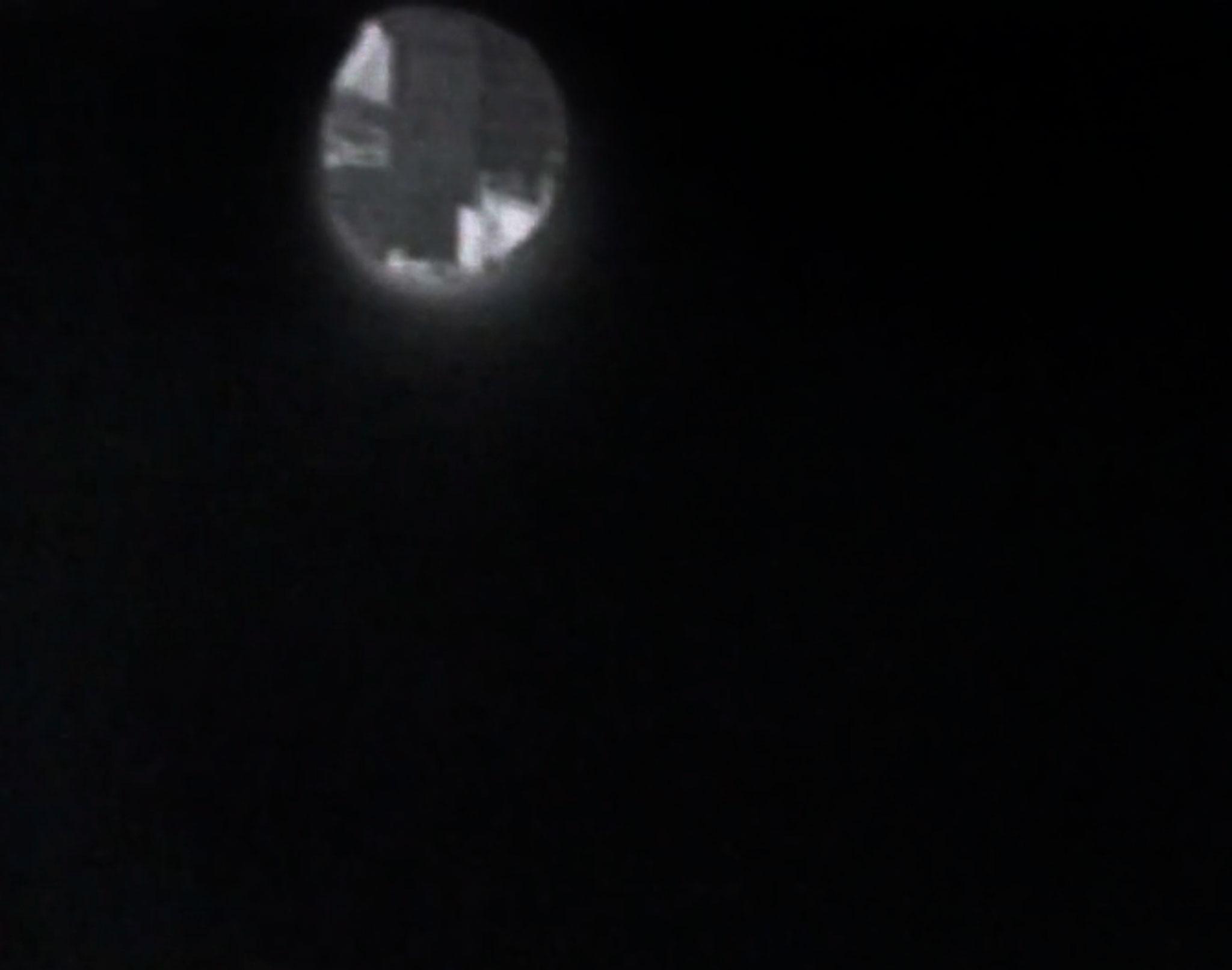 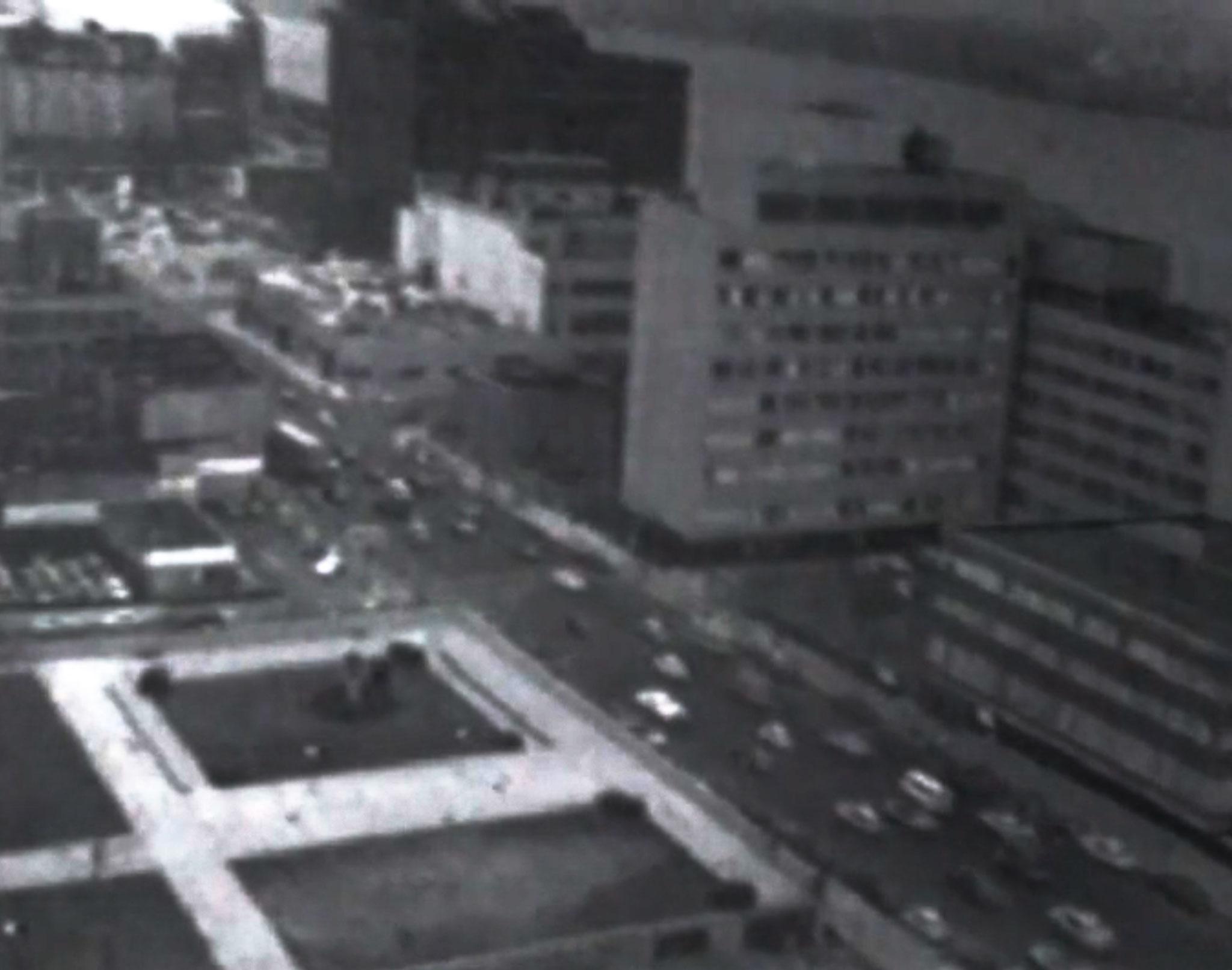 Nancy Holt strove to provoke the “concretisation of perception” by isolating “limited visions through holes and things” that would cause people to “really focus, really perceive intensely the thing seen.”1  Holt’s 1973 video Zeroing In is a conversation, a game, and an experiment. It is also a live, instructional demonstration by Holt of the artful means and elemental technologies by which her work intervenes upon and enlivens everyday acts of visual perception.

Zeroing In is a dialogue between two interlocutors engaged in watching, as we remote viewers do, an urban scene from above. The voices belong to Holt and her close friend, the writer Ted Castle (1938-2006). Over a static shot of city life in motion, we hear their exchange as they watch the same view on a monitor; Holt explains, “viewer and participants are both seeing the videotape for the first time.”2  We also observe the visual effects of Holt and Castle’s directive interventions upon that moving image—an unremarkable New York streetscape composed of buildings, roads, crosswalks, and pavements that is traversed by flows of pedestrian and vehicular traffic. [Fig. 1]

Between camera and monitor two props are interposed: a cylindrical tube and a black piece of board, from which five circular, and closable, peepholes have been cut.3  Holt experiments with the props to create a range of viewing situations. Over the nearly thirty-one minute duration of Zeroing In she opens various configurations of these circular windows onto the scene, switching between zooming in and out, presenting the entire un-obstructed vista, and inspecting the monocular tube view. [Fig. 2] In the penultimate sequence of the film, before zeroing in for the last time, she makes the perforated board spin slowly over the scene, teasing the viewers with a gently dizzying reprise of the disorientations this simple device induced over the preceding half-hour.  The peepholes open to decontextualized disc-views of the recorded view of the thoroughfare. The source of the footage in unknown, but Holt does indicate it was made from fifteen storeys looking down.4  Here in Zeroing In, as in Holt’s periscopic Locators, the function of the apertures is to render strange and new the otherwise ordinary scenes they frame. As the video proceeds, the discrete views disclosed by the perforated board become familiar: they become, in Castle’s words, “old friends.” Occasionally, a slender pointer invades one of the circles. When Holt uses this tool to point out a particular feature, the circle under scrutiny suddenly comes to resemble the outline of a petri dish. [Fig. 3] Such instances recall the artist’s early training in biology, and prime viewer-listeners for the ways Zeroing In both documents and enacts anew an investigation into the operations of perception.

Responding to each change of view in turn, Holt and Castle proceed to “read” together the largely occluded panorama. Speaking always offscreen,5  they alternate between making deductions from the available visual information (“looks like it might be a parking lot”) and suspending indexical assertions to engage directly with the temporarily non-objective qualities of what they can see (“there’s a square-edged shape coming in, light grey”). Their approach seems to be predicated on a joint commitment to pursuing what Holt called “doubletake.”6  Circumventing the foreclosure of vision that results when cursory apprehension cedes too quickly to the recognition that shuts down seeing, they pursue, in its place, a renovated practice of perception. When a circle offers an unambiguously identifiable view they sound deflated—their bids to see afresh having been overwhelmed by intrusions of “reality.” We are reminded of children playing “let’s pretend,” a game relying on the synchronised suspension of participants’ habitual ways of seeing the world. When Holt begins to describe “sort of medium grey...shapes,” and then concedes that “probably they’re buildings too”, Castle can only agree. He adds: “I mean there’s practically nothing you can do with it...”, and they laugh, in acceptance of mutual defeat. The game momentarily dissolves in their rueful chuckling.

Holt worked with pairings of interlocutors in a number of moving image works, including Zeroing In. In the 1974 video installation Points of View she creates four pairings with Lucy Lippard and Richard Serra, Liza Béar and Klaus Kertess, Carl Andre and Ruth Kligman, and Bruce Brice and Tina Girouard.The attitudinal opposition constructed between the colocutors in Zeroing In recalls—albeit in much milder form—the contrasts staged in Holt and Smithson’s 1969 film, East Coast, West Coast where Holt and Smithson perform stereotypical positions of American East Coast and West Coast artists of the late 1960s.  In her 1976 text “Some Notes on Video Works,”7  Holt suggests her pairings were determined by “their differences in outlook”. The artist and writer who voice Zeroing In draw on a shared vocabulary of focal points, such as foreshortening, patterns, and geometric shapes, yet it is only Castle who talks in terms of pictorial space. He alone reaches for reference points in art and visual culture. Expressing fondness for the abstract appearance of an especially blurry circle in the upper-left corner, Castle proposes that it has “almost like a certain cameo quality to it.” [Fig.4] Another he pronounces to be “Very Bauhaus. Very, very Bauhaus.” [Fig. 5] In contrast, Holt confines her judgments to adjudications of visible fact and musings about the activities of those whose movements the video registers in a kind of benign, ambient surveillance.8  Just as Holt’s earthworks and sculptures were designed with a mind to the human interactions they would incite,9  here she traces the circulatory systems of the social context. Holt’s speculations are analytical; the features that catch her attention (“manhole covers and gratings”) are interesting for the functions they imply. When Castle claims of one indistinct view that “This is one of the earliest films that was ever made,” the artist grounds his fugue by re-casting the vista as “masses of white smears”. When he persists, asking “Do you think that would make a good painting?” Holt’s response is a wry and dry: “Well, it might. Who knows.”10 [Fig. 6]

In a 1983 interview in Circa magazine, on the occasion of the installation of her systems work Sole Source in Ireland, Micky Donnelly diagnosed “a kind of opposition throughout [Holt’s] work”, charging her with seeming “to be a mystic trying to get out and an engineer trying to get in.”11  The published interview transcript records Holt’s answering laughter. Her laughter is a recurrent motif within the sonosphere of Zeroing In, audibly underscoring the congeniality of the exchange with Castle. Although structured by an envisioned sequence of actions, Holt’s exploration of conversational co-viewing unspools naturally. It plays out according to a rhythm determined only by the unscripted transfer of energy between the speakers as they react to the scene, and to each other. This imparts an impression of presence that productively jars with the knowledge Holt and Castle are conversing while executing manual interventions upon a monitor that is screening pre-existing footage, itself an artefact of action from an already distant point in time and space. Such distancing effects are central to Holt’s practice. In “Some Notes on Video Works”, the artist writes of the camera and prop adding “their own double distances to an already naturally distanced view”, and in an interview with James Meyer, Holt speaks of “distancing” as one of the core concerns of these video works.12

Owing in part to this curious mix of advance preparation and live interaction, Holt’s role in Zeroing In is inherently, if informally, pedagogical.13  She does not lecture; instead, Holt sets up conditions under which both the dyad-in-dialogue and listener-viewers can come to a new understanding of perception.14  Appropriately then, it is the artist who wields the pointer, she who punctuates proceedings with variations on the phrase “Ok, well, I think I’ll expose another circular image”, and she who asks, with the air of an encouraging teacher, “What do you think we see here?” The “we” being addressed extends, crucially, beyond the pair heard offscreen to “us” the perceivers. The “we” also encompasses all future participants in the collective viewing experiment the video initiates. The importance of listener-viewer participation in this lesson is underlined by Holt’s sudden cutting of the audio-track at twenty-nine minutes three seconds, leaving “us” watching without commentary for almost two minutes. Having been trained by Holt over the work’s duration into the praxis of “doubletake” Zeroing In models, we are confronted with an “over to you” moment. [Fig. 7] Abandoned by instructor (Holt) and student-demonstrator (Castle), gazing at last upon the fully exposed scene, we find ourselves automatically putting into practice the lessons learnt.

Blom, Ina. The Autobiography of Video: The Life and Times of a Memory Technology. Berlin: Sternberg, 2016.

Lee, Pamela M. “Art as a Social System: Nancy Holt and the Second-Order Observer.” In Sightlines, 39-58.

Sarah Hayden is a writer and Associate Professor in Literature and Visual Culture at the University of Southampton, England. She is the author of the monograph Curious Disciplines: Mina Loy and Avant-Garde Artisthood (University of New Mexico Press, 2018), and co-author with Paul Hegarty, of Peter Roehr–Field Pulsations (Snoeck, 2018). Other recent publications include essays on Christopher Kulendran Thomas for Cultural Politics, Emma Wolukau-Wanambwa for Lux, and liquid voice and sensorial sovereignty for b2o: boundary2 online. Sarah leads the UKRI/AHRC Innovation Leadership Fellowship project, ‘Voices in the Gallery’ (2019-2021) in partnership with John Hansard Gallery and Nottingham Contemporary, and is currently writing a book about voice in contemporary art. www.voicesinthegallery.com