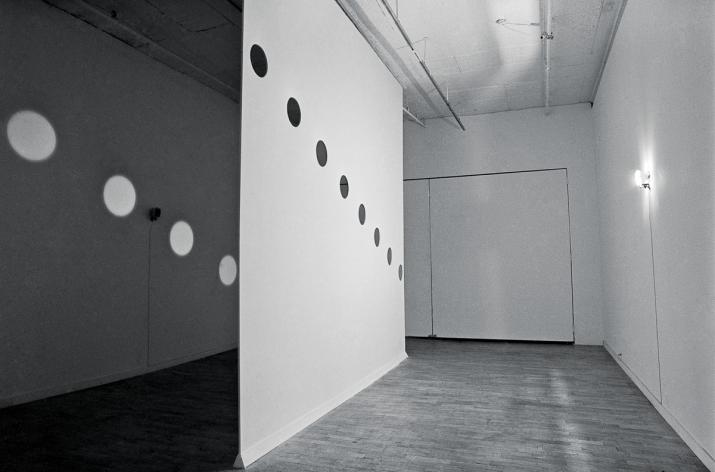 Light, like sight, can be channeled, controlled so that shapes of light can materialize. In Holes of Light these shapes of contained light were outlined on the wall in pencil giving them even more of a physical presence, so that even when the light or sight is absent, a trace remains.

2. Light as the Concretization of Sight

It was once believed that sight emanated from the eyes and was cast out onto the world; that it somehow touched the things seen. Eye sockets were holes in the head for the emanation of light. When working with my locators, and demarcating areas of vision caused by the channeling of sight, I often wished I had a small, strong light to place in the end of the tube in the position of my eye. I could have then easily traced the zone of light on the wall without having to repeatedly look through the pipe. With Locator with Spotlight and Sunlight I discovered that a spotlight made the same shape on the wall as my sight through a locator when the spotlight was placed at the same distance, height and angle from the wall. With Holes of Light, if I could have put my eyes where the light fixture was, then the rounded shapes of light on the gallery wall, formed by the light shining through the holes in the center wall, would have been what I saw. In other words, the pattern of cast light and one’s sight were analogous.

The room is divided into two equal parts alternately light and dark. An electric timer turns one of two opposing 650-watt quartz lights on, and the other one off, every one minute and forty-five seconds. When the light is shining through the holes, the holes appear dark and the central wall appears light. When the wall is dark, the holes are light. Thus the walls of the room divide into light zones and shadow zones. The central wall casts a shadow twice its length.

There is a gradual increase in gradation of the edge of the shadow, the penumbra, around the light shapes cast through the holes, the more distant the cast light is from the holes. Consequently with each shape of light it was necessary to choose which penumbra gradation would be accentuated by the pencil outline.

Shadow crescents appear when the circles of light are seen through all eight holes at once. If one stands against the room wall, one circle of light can be seen filling a circular hole, but the rest will be partially seen, causing dark crescents of graduating sizes to be visible. A crescent also can be made by placing one’s head in a circular hole, causing the light on the wall to surround the shadow of the head in a crescent-like way.

The circular holes are half the size of the twenty-inch circles of light. The room is twenty feet wide; the central wall is ten feet away from each wall of the room. Thus, the light spread about one inch per foot.

8. Definition of Space through the Casting of Light