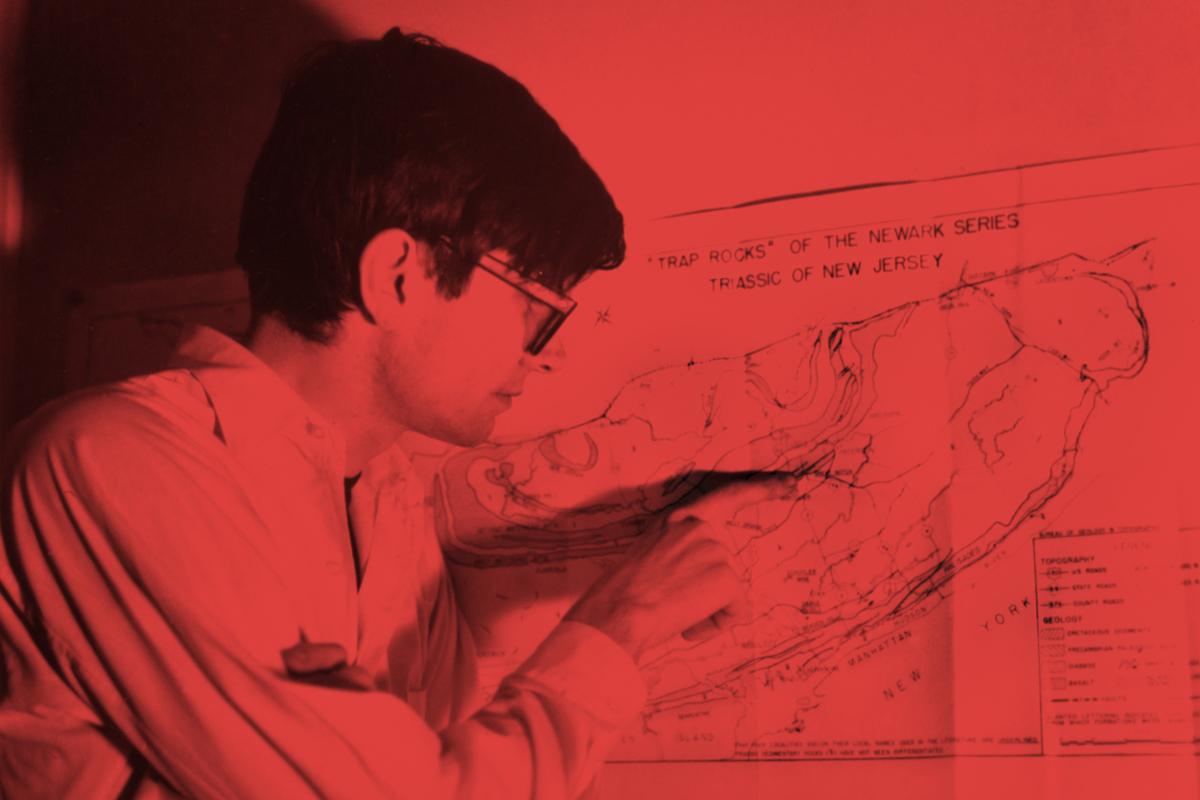 Abstract Cartography focuses on a crucial five-year period in Robert Smithson’s development: 1966 to 1971, a time when his “inklings of earthworks” began. This careful selection of artworks traces Smithson’s radical rethinking of what art could be and where it could be found.

In 1966 Smithson was part of a symposium at Yale University, where he discussed the idea of the city as a crystalline network. In the audience was a representative of the architectural consulting firm Tippetts-Abbett-McCarthy-Stratton who was working on a proposal for a new Texas regional airport between Dallas and Fort Worth. Right after the talk, Smithson was invited to join the team in “trying to figure out what an airport is. I invented this job for myself as artist-consultant.” He set about the task by studying maps, surveys, reports, specifications, and construction models. Smithson saw the potential airport as a universe resting “on a firmament of statistics;” and he considered the vast terminal site as a crystal network.

An autodidact, Smithson's interests in travel, cartography, geology, architectural ruins, prehistory, philosophy, science fiction, popular culture and language spiral through his work. From his landmark earthworks to his 'quasi-minimalist' sculptures, Nonsites, writings, proposals, collages, detailed drawings, and ecologically charged earthworks, Smithson's ideas are profoundly urgent for our times. By exploring the conceptual and physical boundaries of landscape Smithson raised questions about our place in the world, their relevance heightened as the dangers of global warming move ever closer.

In the South Gallery, Abstract Cartography brings together a laboratory of sculptural thinking, sculptures exploring crystal geometry and distorted perspective, and key works showing Smithson’s exploratory research into what an airport might be. Smithson was interested in possibilities of artists collaborating with other disciplines, and he was committed to art being a necessary and urgent part of society. His proposals for airport buildings echo his geometrical sculptures that, in turn, were informed by the potential of aerial art. His plan was to place earthworks at the edges of the terminal complex, that were viewable from the air and would become two-dimensional when looked at from an ascending aircraft. The earthworks would be broadcast live to television screens installed in a museum at the center of the terminal, an invitation to watch time pass while waiting. Airports have no centers; they are transitory zones between places. For Smithson, the fringes were locations for fertile thought – and far more interesting than the center.

Although the scheme did not come to fruition, seeing art from the air consolidated a new interest in mapping, perspective, and scale for Smithson. If one can travel high enough, our planet can be seen in its completeness, an island in the ocean of the universe. Smithson cut existing maps into fragments, shifted their projections, layered them, altered scale using photostats of progressive sizes, and explored the distorting perspectives of longitude and latitude. In the sculpture for Shift (1967) these projections are applied to three-dimensions, leading to a collapsed system and a slide into entropy, charted in careful drawings.

Abstract Cartography presents in the North Gallery a wall of maps, a collection of charted conceptual islands and continents, and the film Mono Lake (1968/2004), made with Nancy Holt. Mono Lake is concerned with a journey and destination. It documents Smithson, Holt, and Michael Heizer as the three artists explore one of the oldest lakes in North America on July 28, 1968. They are seen on the road, rustling maps and consulting rock hounding guides, and Smithson gathers from the site material for Mono Lake Nonsite (Cinders Near Black Point) (1968). Smithson’s Nonsites are three-dimensional maps of matter. He described them as “indoor earthworks;” they bring material from site into the museum—the Nonsite—with the travel between the two points creating “a vast metaphor” that is as abstract as the maps we use to locate ourselves. Abstract Cartography includes a rarely seen photowork for the 1968-69 Double Nonsite, California and Nevada.

Smithson noted that “the map has exercised a fascination over the minds of artists,” referring to himself and writers important to him.  He pointed to Jorge Luis Borges and Lewis Carroll who described maps as fictions, approximations of reality, interpretations always pointing elsewhere. Cartographers drop a grid on to the globe to fix its surface into neat parcels to contain information—a logical system that is also entirely abstract—while geological surveyors build layers to represent the surface of the Earth. Smithson applied these methods to his radical rethinking of sculpture, pulling the maps apart to rethink place and cartographic communication. Considering cartography as an abstraction of landscape, Smithson mapped his ideas on to airports, ruins, swamps, industrial sites, suburbs, and the edges of landmasses to make entropy visible and rethink how scale, site, and sculpture can be understood.

A series of significant works on loan from The Modern Art Museum of Fort Worth are presented in Abstract Cartography alongside a careful selection mapping the legacy of Smithson’s airport investigations from the collection of Holt/Smithson Foundation. Many of these works are from the personal collection of the artist Nancy Holt—who married Smithson in 1963 and managed his Estate until 2014—and have not previously been made available.

Robert Smithson: Abstract Cartography is organized by Philipp Kaiser, Chief Executive Director of Artists and Programs at Marian Goodman Galleries, and Lisa Le Feuvre, Executive Director of Holt/Smithson Foundation. It is accompanied by an illustrated newspaper reproducing a selection of Smithson’s writings.